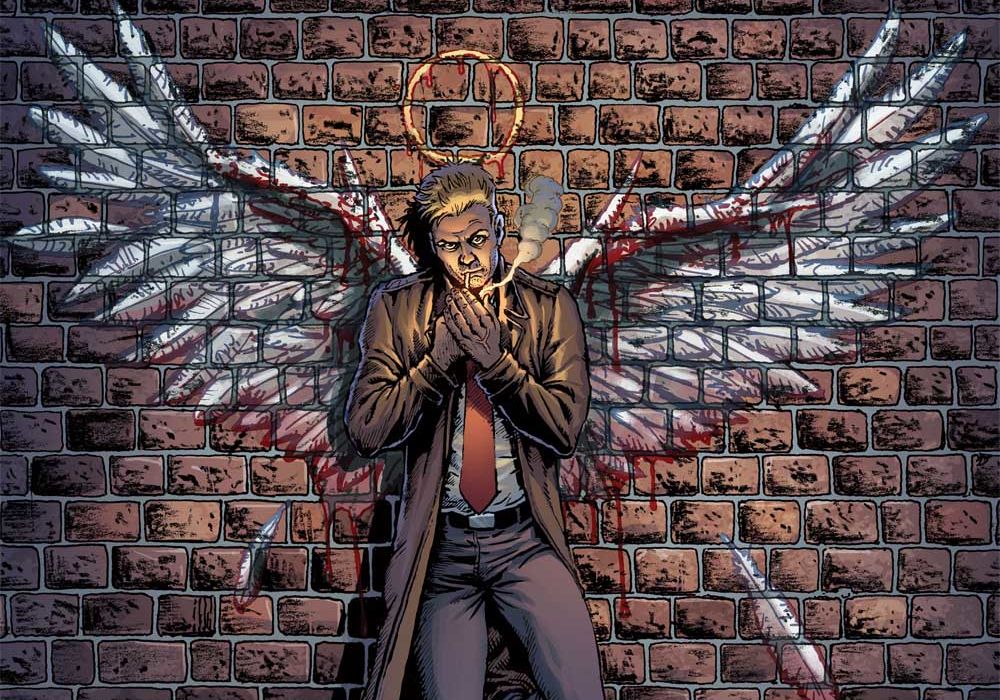 From birth to a modern tale, John Constantine definitely knows how to make an entrance into his latest showing through DC Black Label in an intriguing occult mystery. 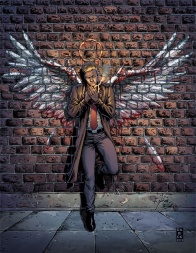 A billionaire falls out of the sky and is gruesomely skewered on a church spire. Bizarrely, Angel Wings are attached to his back. More follow until, hallelujah, it’s raining businessmen. Detective Aisha Bukhari is stumped by this, until she’s visited by her childhood friend, occult investigator John Constantine. DC’s Hellblazer discovers a link between the falling elite and a shocking moment in his and Aisha’s misspent youth. How do these killings tie to the first death on John’s hands? How does this involve heaven and hell? Even if this is kind of John’s fault, will Constantine be happy to let a few more rich bastards fall from the sky, like a vindictive Robin Hood? It’s an all-new DC Black Label mystery starring John Constantine in his very first tale spun by acclaimed writer Tom Taylor (DCeased) and artist Darick Robertson (The Boys)!

As shown in the likes of “DCeased” and beyond, Tom Taylor is a master of integrating myriad emotions throughout a single issue, let alone an entire arc. With “Hellblazer: Rise and Fall” #1, he tries his hand not only at John Constantine as a character, as he has done before, but also at telling a comprehensive story in Constantine’s dark world of street-level magic more of less apart from the higher escapades of various superheroes or supervillains. Bringing in the supernatural alongside the blue-collar warlock’s own myriad problems, Taylor does s very good job of telling a tale befitting the “Hellblazer” name, one fitting into the more mature rated DC Black Label imprint.

Newcomers to the story of John Constantine will be quickly acquainted with the character courtesy of Taylor’s relatively short origin story. While there are sad moments as well as horrifying ones, almost none of it is outright shown, only alluded to or explained after the fact, enabling readers to connect the dots instead of spoon-feeding them, letting them feel a little more connected to the story in the process as well as filling in some of the blanks with their own imaginations to a degree that would be difficult to accomplish with outright artwork. The tragedy and terror in a younger Constantine’s life acts in contrast to his swagger in a more modern period, with the confidence and apparent close friendship between him and a girl he likes continuing as a throughline.

Horror and tragedy are not the only genres in Taylor’s toolbox, as he shows his continued mastery of tone through a peppering of humor amidst the terror. Constantine’s irreverence and sarcasm are palpable as ever, from trading barbs with an old friend about stealing her boyfriend to making a pitch-black joke about the amount of blood that came from a falling body’s collision with the ground. While he does cross quite a few lines, Taylor’s Constantine still knows when not to revel in his own humor, keeping things from being too insensitive while also holding back the story from having too despairing a mood altogether.

To be clear, “Hellblazer: Rise and Fall” is very much a mature story in its language and visual content. While this debut does utilize the lessened censors of Black Label, it never seems to drive itself to excess. Swear words are told, but not every other sentence, and those who tell them do so in a way that feels natural and fluid rather than taking advantage to the point of immaturity, instead functioning to flesh out the lives and characterization of individual people. However, the actual plot feels very much in line with the kind of story that could be told in the main DC universe, give or take a few characters, rather than being tailor made (pardon the pun) for Black Label itself.

Darick Robertson’s artwork shows a marked contrast from the likes of “The Boys,” though there are still similarities. There is a far greater focus on intense detail rather than any exaggeration in proportions, pulling away from the “superhero” side of things by pushing for more realistic, “gritty” imagery to go along with the street-level sorcery of Constantine’s fantastical life. There are still elements of his work on “The Boys,” especially in smug or shocked facial expressions, but the similarity is harder to see unless one knows what they are looking for.

This expertise with facial expressions extends to a wide range using the eyes alone, from horror to curiosity to mischief to anger and far more beyond, helping to tell exactly what people are feeling without requiring a word of dialogue or narration. In one case, the swift shift from childlike nerves to fiendish monstrosity serves as a shock for readers and characters alike, with only a slight shift in how a face is drawn.

In taking a step back from a wider proliferation of superhumans, Robertson’s more realistic pencils make events all the more horrifying by their sheer mundanity. While the behaviors involved are disturbing in theory, they become entirely the stuff of nightmares when readers understand that, barring the actual magic involved, some of these scenes are all too real, from those in John Constantine’s past to the case he is working in the present day. In fact, by having magic portrayed primarily not with flashy effects, but by just showing the results, there is terror (or in one case, bemusement) and uncertainty in many of the spells cast, almost as though Constantine might be a charlatan far out of his depth until it becomes absolutely clear that magic is real in the story.

The colors provided by Diego Rodriguez add even further to the realism of Robertson’s artwork, spreading out the focus to the rest of each panel much like the illustrations already concentrate in on facial expressions or acts of violence. By using heavy shadows amidst natural colors, Rodriguez helps with securing the sullen mood for “Hellblazer: Rise and Fall” #1, which stretches from an alcoholic, abusive parent to apparently occult machinations. Through shading and color choices, the ugly nature of the aforementioned parent can stand in deliberate contrast against the inner beauty of a former close friend who may have been a love interest at one point, both of which take a different tone when put in relief against the inhumanity of the risen dead. Even barring the overall coloration of one scene or another, splashes of blood make for a violently crimson intrusion upon overall quiet scenarios, adding to the shock value of these situations in spades to enhance, rather than betray, the nature of the entire story.

Final Verdict: 8.0– Get a crash course in John Constantine’s history as we delve into a newcomer-friendly occult tale.