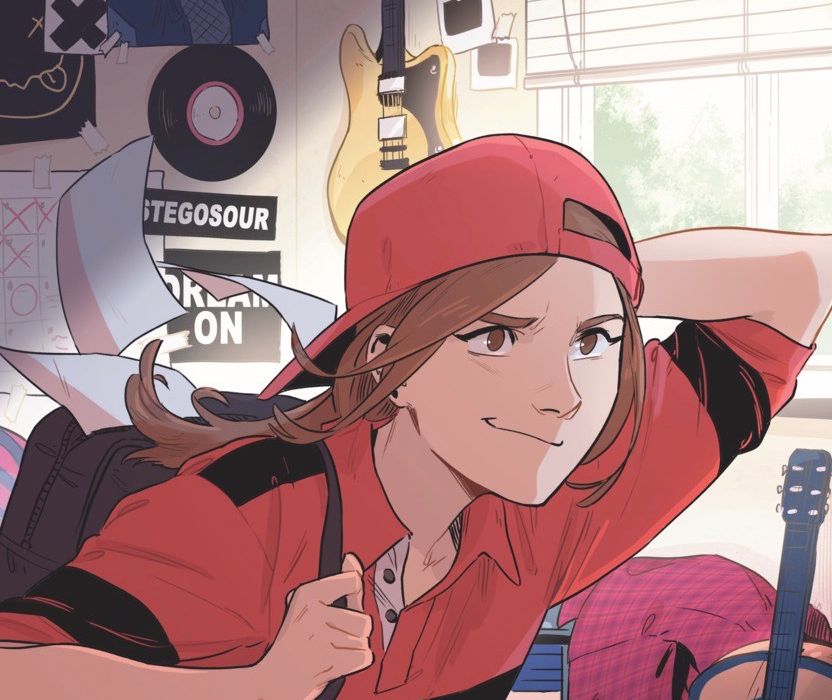 “Hi-Fi Fight Club” continues to be a bit light on the fight portion of its titular premise, but the interpersonal dynamics of the club more than make up for it. 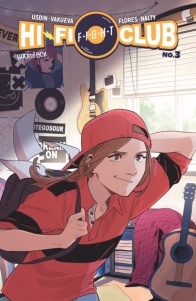 Now that Chris knows about Vinyl Mayhem’s dark, amazing secret, it’s time to get her in fighting shape to save Rosie from certain musical DOOM!

At the end of the premiere issue of “Hi-Fi Fight Club” we learned Vinyl Mayhem (the record store where all the characters work) is merely a front for a “secret teen girl vigilante fight club.” If this book were episodic, like the Scooby Doo TV series, for example, the girls would already be solving their third mystery by now. Instead, writer Carly Usdin continues to take a decidedly more deliberate tack, prizing nuanced character development well above schlocky plot lines that literally cut to the chase. Not to belabor the point, but if you’re looking for nonstop fist fights and endless karate kicks (as the title may seem to imply), this isn’t the book for you. No doubt, there will be mayhem and vigilante justice eventually, but the real story lies in Chris’s intense, unyielding desire to become part of something bigger, and more important, than herself. Viewed from that vantage point, “Hi-Fi Fight Club” #3 in another very solid installment.

As with previous chapters, this book’s virtuosity lies in its remarkable accessibility. At first glance, it’s an ensemble piece, but in truth the story is told almost exclusively from Chris’s point of view. Artistically and practically, this simple creative choice gives us an instantly relatable accomplice with whom to experience this world first hand. Immediately, we’re part of the club, no initiation required. Even the passage of time – “Several sorta sad hours later” – is intensely subjective, filtered through our narrator’s personal experience. By aligning the reader’s perceptions so closely with the protagonist’s, it almost becomes our journey as much as hers. We see and apprehend everything through her angst-ridden, self-conscious, totally lovelorn eyes.

Meanwhile, the breezy, Manga-inspired visual style, driven Nina Vakueva’s pencils and Irene Flores’s inks, makes following the action nearly effortless. The book’s pages and panels are exceptionlly clear and efficient, communicating their essence almost instantly, allowing us to focus more intently on the characters’ emotions which are expertly rendered through facial expressions and body language. For example, after Chris watches her co-worker Maggie (on whom she has a massive crush) chat up a guy from the coffee shop down the street, a brief three-panel sequence says it all. In the first one, Chris stands with her elbow awkwardly bent, hand behind her head, struggling to ask Maggie a distinctly intrusive question. Next, we see a coquettishly rendered Maggie (from Chris’s love struck point of view) as she glances upward with large, blue innocent eyes. Finally, we see Chris looking over her shoulder, fingertips on her chin, sheepishly trying to slink away, knowing that she may have just blown it. Take away the dialogue and the scene still plays out perfectly, infused with the roller coaster dynamic of teenage longing and heartache.

If all of this is starting to sound a bit too serious and “grown up,” however, Rebecca Nalty’s bright colors are here to inject some youthful exuberance and energy. From lime green to purple to bubble gum pink, seemingly every color makes an appearance, helping motion lines, letters and characters really pop off the page. There are occasional details, of course, especially inside the record store, but in many panels it’s just characters themselves and well used negative space, underscoring the fact that the fight club girls are the story. Time and place are not unimportant, but they’re clearly not the focus. (Similarly, Irene, the boss lady and very cool adult remains pretty two dimensional in an almost throwaway role, though this is a minor point that doesn’t make or break the story).

Ultimately, “Hi-Fi Fight Club” exemplifies an artistic tension common to many great works of fiction: ostensibly, the story is about one thing (solving a mystery), when in reality it’s about something else (a teenager’s awkward attempt to fit in with her peers and navigate the clumsy space between friendship and love). And while Usdin’s dialogue and narration certainly reinforce this dynamic, the illustrations really drive it home. The plot is by no means a page turner, but the wonderful ensemble cast and amicable visual style will keep you engaged. Usdin and the rest of her team are definitely building the story slowly and methodically, but this point it feels worth it. This book is clearly setting itself up for the long haul with some wonderfully realized, potentially franchise characters. These are just the first steps.

Final Verdict 8.1 – As the mystery deepens and Chris strings together some tantalizing new clues, an already intriguing book starts to tell us what it’s really all about.