“House of Whispers” is the second series to launch under the new ‘Sandman Universe’ line by DC, exploring new concepts and ideas that circle around Dream, the Dreaming and the expanded cast of what is considered by many to be comic’s royalty. So does “House of Whispers” truly innovate on top of this mythology, or does it meander out of the gate? 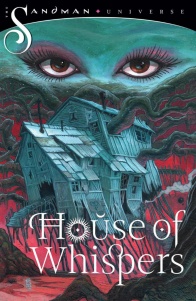 An all-new corner has been added to Neil Gaiman’s Sandman Universe! Welcome to the House of Dahomey, the houseboat of Erzulie Fréda, where the souls of Voodoo followers go when they sleep to beseech the flirtatious and tragic goddess to grant them their hearts’ desires and counsel them on their futures and fortunes. When you arrive, you’ll find a party is in full swing, filled with all kinds of fabulous and fierce folk, while fish fry and music blasts. From her bayou, Erzulie scries upon the mortal realm and sees four human girls open a mysterious and magical journal filled with whispers and rumors that, if they spread, could cause a pandemic unlike any the Earth has seen, with the power to release Sopona, the loa lord of infectious disease and cousin to Erzulie, who is currently banned from the human plane. But even the fearsome Erzulie cannot be of assistance when her dream river turns tumultuous, tossing her house from her realm and into another…

One of the strangest, most outlandish concepts of the ‘Sandman’ mythos have been the supporting characters of Abel and Cain – yes, those brothers – and the house they each represent and own in the Dreaming, the House of Mysteries and the House of Secrets. This new series by Hopkinson, Stanton and Rauch asks the question of why are there only those two houses? And what events could lead the neighborhood to expand further? In doing so, it pulls from its own set of myths and folklore, in a rich and ambitious tapestry that succeeds more than it fails, only stumbling on occasions.

The art by Stanton and Rauch is overwhelming, in a very positive way. As the readers are thrown in the middle of a gala event hosted by Mistress Erzulie, the settings, background characters and structures are everything they have available to make sense of what is going on. There is a lot of details included on every page but, even more important than that, the consistency around them and their design is something not often seen in comics. Mistress Erzulie’s house has an architecture of its own, with staircases, luminaires and tapestry all connecting it with a ’50s New Orleans aesthetics. It is truly beautiful to look at and to admire the research the creators when through to have it executed so well.

Character design also borrows from a similar page and vein, but with layers of supernatural and the fantastic woven in. In an environment of dreams and whispers where nothing is truly what it seems, appearances can be fleeting and fluid, with only the artist’s imagination acting as boundaries. “House of Whispers” delivers big on this regard, with key characters like Mistress Erzulie herself and Uncle Monday looking normal at first glance… just to reveal incredible visual traits panels later. Erzulie’s regalia and sophisticated look clashes with Monday’s more barren and frightening reveals, always keeping the audience guessing to what comes next.

Not everything is perfect on the art department, though, especially around narrative flow and pacing. Given how busy each page and panels are, “House of Whispers” sometimes fails to provide a clear path for reader’s eyes to follow. What accentuates this problem is how some characters seems to be doing different actions than intended: in one situation, Mistress Erzulie apparently slaps Uncle Monday in the face, where in fact she is just extending her hand to point to a direction.

Hopkinson’s script is ambitious and challenging, but it does not become an hermetic ordeal for the readers. Instead, “House of Whispers” seems more like a valuable challenge, one that needs to be revisited on multiple readings. In just a few pages, the audience is introduced to a folklore it may not be accustomed to, brand new characters with specific agendas and motivations, stressful situations happening across multiple dimensions, and an ending that opens up more questions about the series’s mission statement. While it can feel a bit overwhelming at first, it is so well constructed and layered that it invites further exploration. And it also rewards its audience with some true gems of moments.

Of special value, during Mistress Erzulie gala, visitors plead to the lady of the house their heartfelt desires, their wishes and whispers, so to speak. What makes it interesting is that all of them are asleep, so these desires are some their purer, most core elements. The manner that “House of Whispers” deals with that, both from a story perspective and also visually, is truly inspirational and, some might say, poetic.

As it wraps up, like some of the seminal Sandman stories, “House of Whispers” #1 feels confusing, jarring and complex… like some of the best dreams often do. While there are shortcomings on art and narrative, these obstacles do not get materially in the way of a series that can be truly unique and inspirational, provided readers rise to the challenge to unlock its mysteries, secrets and wishes.

Final Verdict : 7.0 – Showing a lot of promise, “House of Whispers” is not without its limitations, but it is so ambitious and honest that it should keep readers engaged for more.