For the last couple of months, Hickman, Larraz, and Silva have been reinventing the X-Men franchise. “House of X” #5 is labelled as one of three pivotal moments of that transformation. The actual delivery of this issue is a rare occasion where all the promotion is truly justified; this is one for the ages. 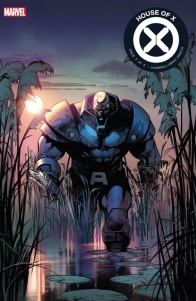 Can Xavier and his students fight to survive against the humans’ plan to eliminate them? Superstar writer Jonathan Hickman (FANTASTIC FOUR, AVENGERS, SECRET WARS) continues his reshaping of the X-Universe alongside Young Gun artist Pepe Larraz (EXTERMINATION, AVENGERS). The Future of the X-Men begins here!

As a franchise, the X-Men have been around for about as long as Marvel Comics had it’s renaissance on the sixties. Since that time, the publishing line around the mutants have had their relaunches and reinventions, rising and falling from prominence within the broader line, from flagship status during the nineties to something less so in more recent times. It is important to frame that, because these particular mini-series (“House of X” and “Powers of X”) had a broader task than just being exciting. They set out to bring a truly unique status quo to the line. And it is within that frame, within that ambition, that this review will examine it. Alert for SPOILERS ahead; unfortunately, to review this particular issue without dissecting some key plot points is somewhat of a disservice.

Starting with illustrations, color, and design. Past issues of “House of X” had already allowed Pepe Larraz to demonstrate that this series would be a career highlight for someone already on the rise. This issue might be his strongest yet. First of all, this is a fairly unusual story, devoid of nearly any action, but filled with social, political, and personal consequences. It is at the same time an intimate issue, but one that deals with the impact of those intimate moments to a larger population. Achieve this through illustration took a lot in terms of page and panel layout.

Larraz, on some of “House of X” #5 best sequences, frames the return of some X-Men to life with their re-introduction to the Krakoa community. It is done by alternating taller panels with wider ones, shifting the up-and-close relationships, with the roaring reaction of the public. It is managed so well, that within a couple of pages, the issue evokes a sense of political clamouring, of social crescendo that is certainly a rare offering.

Larraz once again solidifies the main beats of the script towards the end of the issue, when a group of unsavoury mutants arrive in Krakoa. From the facial expressions of those present (Wolverine is a highlight), to the arrival itself, mutant after mutant pouring in through portals into the page, the artist provides a sense of inevitability, of being present for something larger than one’s self, that culminates on some of the best final pages of the X-Men line – a welcoming encounter between Xavier and Apocalypse. Artistically, Larraz, finds an angle where Xavier’s smaller body is not portrayed as frail, even in front of the behemoth that is Apocalypse. That lower, tilted angle, framed by the flora of Krakoa, is brilliant.

Larraz’s illustrations are only as effective because of Gracia’s palletes. He has been doing colors for both “House of X” and “Powers of X” and that approach added further consistency to the overall story. This time around, Gracia’s work shines the most on two sequences. The first one is the same Apocalypse and Xavier encounter, where the hopeful lights shines through the trees in Krakoa, to what would have seemed a daunting meeting if not displayed properly. The second, when the celebration of those recently resurrected erupts into a mix of sunlight and power signatures, to what can be better described as a mutant aurora borealis. It is that beautiful.

Not to be forgotten on the visual department, the contributions of Tom Muller to specific pages’s designs it surely felt. Muller and Hickman have included several pages of prose and graphs on these series since their beginnings, and on “House of X” #5 they are critical on explaining some of the details of what is happening in Krakoa, and especially on the world stage after the United Nation’s summit.

And what to say of Hickman’s script and plot? The writer is known for his long-term approach to comics, and it was clear from the start that “House of X” and “Powers of X” would be doing some heavy foundation work. This is where all (or at least a lot) comes together. Under less-able hands, this could have come across as overly-expository, but here is simply flows.

In the space of thirty-something pages, Hickman manages to bring several mutants back to life, explain how that process works, weave in characters thought-forgotten from multiple past runs, and combined all of that into a meaningful discussion about society. How is it formed? Does it requires a common culture, territory, and government? How does it change its rulers and inhabitants? How is it achieved on a broader scale and stage? And what must be compromised, what allegiances must be forged, to keep it?

It does not shy away from any of those questions, and meets them with a sense of urgency, a desire to quickly implement that new status quo, that is contagious. What is even more uncanny, is that it does so without losing a sense of personal meaning, of character depth, that could have been easily set aside. There are moments with Storm, Cyclops, Wolverine, and Jean Grey that, despite short, carry so much weight, and so much reverence to what came before, that it is valuable to new and old readers alike.

All in all… this is it. This is the promise of something new and ground-breaking coming together as it should. The mutants are dead: long live the mutants.

Final Verdict: 9.5 – Powerful, beautiful, impactful. “House of X” #5 is yet another brilliant issue on the Hickman, Larraz, and Silva reinvention that will be referenced for years to come.