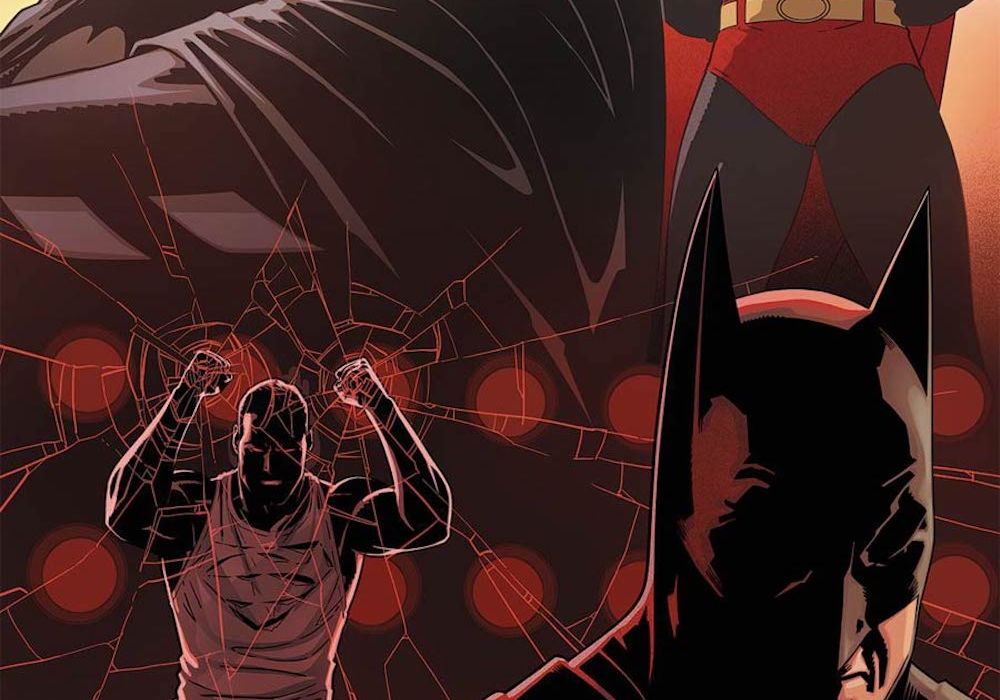 Closing out the “Injustice 2” saga, a combination of flashback and modern story bring with it a roller coaster of emotions. 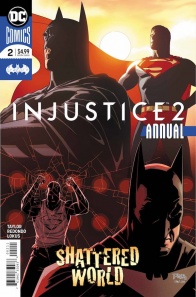 Injustice 2 ends here—so as the story segues into/sets up the Injustice 2 video game, we take one final look back. Batman and Superman’s alliance was torn apart years ago by the events of Injustice. But when Bruce Wayne receives unexpected visitors, he is reminded of a happier time when Clark was his savior. A time of the World’s Finest friendship.

The writing of the “Injustice 2” comic has had its ups and downs. Unlike that for the first Injustice video game’s prequel comic series, the story didn’t really come to an overall conclusion that led directly into the video game, but rather just… ended. As such, part of Tom Taylor’s story to tell in this annual, ‘The World’s Finest,’ is to close the emotional beats, to settle some things before the story can move forward. In this respect, Taylor performs marvelously.

Cutting between the appearance of Jonathan and Martha Kent in the present day at Stryker’s Island and an adventure eight years prior (roughly two years before the first comic series), Taylor examines the friendship between Superman and Batman, and between their respective families. In the process, there is a lot of time given to certain key members of the families that connect the two, in particular Lois Lane.

Taylor uses Jonathan and Martha Kent to provide some much-needed adult supervision to the feud between their adoptive son and his former best friend. As Jonathan himself says, they had to raise and set boundaries for Superman when he was growing up, so Batman or Bruce Wayne aren’t going to scare them at all. The attitude of constantly letting the wind out of Batman’s cape adds a lot of comedy to the otherwise heartwrenching tale, balancing that levity against the cold hard facts of what the eponymous World’s Finest duo truly need to do, even with Superman being a criminal justifiably behind bars.

Lois Lane has a fair amount of the spotlight in this annual, as Taylor examines just what is missing that broke apart such a hard-forged friendship. She isn’t the damsel in distress needing constant rescuing, nor is she completely on top of everything, but she adds a clear sense of hope for even the smallest, non-superhero people in the DC Universe, showing that they don’t need expert training, powers, or a mask to be effective in protecting the defenseless.

A key element in Taylor’s script is its use of dramatic irony. For extra tragedy, Superman is shown to idolize Batman in the flashback scenario, and for them to work together so very well against criminals, adding to the sense of what was lost when Joker broke the Last Son of Krypton. Furthermore, this dramatic irony is clear in some non-dialogue portions of the script, such as a certain symbol appearing on Brother Eye’s monitors for a single panel to showcase how the events of the Injustice 2 video game are drawing near, elements that readers, but not the characters, would know.

Bruno Redondo’s artwork emphasizes the emotional gravitas of the story, from the linework itself to the perspectives used. Extra emphasis on thicker lines makes for darker imagery overall, especially in later times of day. Thinner lines come up in the daylight, focusing in on the brighter, happier moments of Superman’s heroism, and the thickness also seems to differ depending on how close the person is to the “camera,” so to speak.

Use of light and darkness draws an emphasis on hope and despair. Using a backlight of flames against the silhouetted face of a man on his knees, Redondo manages to draw away all sense of hope at all, leading to surprising changes in tone depending upon exactly how each character deals with said situations by throwing away those silhouettes as the mood changes.

Perspective is absolutely key to the impact of Redondo’s art. A Dutch angle on Lois after a fight showcases how she is much tougher than she appears to be at first glance. On the other hand, a use of a wider angle further away can either create a heartwarming experience (when it comes to Martha and Superman) or a disheartening, overall tear-jerking one (when it comes to Batman visiting the very same inmate) even within the same physical set piece, the Red Sun Prison.

Rex Lokus adds a lot of depth to the artwork, and thus to the story, with his color choices. The red glow in Superman’s prison is oppressive on one level, but calming on another, giving the idea of Superman being uncomfortable, but people coming in being safer. The most notable use of color comes with the arrival of all of the Intergang assassins. By wreathing the area in flame, giving a backlight of yellows, oranges, and whites that holds up against the dark shadows of their target, they are all that much more menacing, their color schemes somewhat lighter solely due to the flames. By contrast, the immediate action after, with a blue-and-white background, fosters a sense of wonder and joy in readers that eclipses any fear that those criminals may have imposed.

In all, a truly tragic tale to close out the “Injustice 2” comics., bringing everything back around to the beginning and closing out some lingering emotional beats. While it leaves readers potentially wanting more, the feeling differs from the main comic, and is more a general sense of wanting more story after the game’s plotline than any real sense of dissatisfaction.