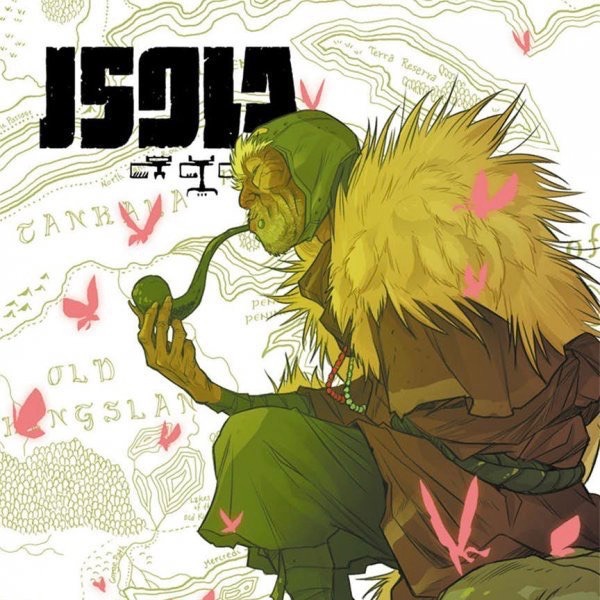 “Isola” #3 continues to build slowly and purposefully. Revel in the artwork. Linger over the illustrations and strange, unfamiliar, ideogrammatic writing. Your patience will be rewarded. (Warning: minor spoilers ahead.) 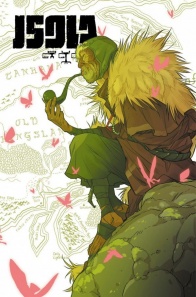 Olwyn and Rook’s paths diverge; one companion on a hidden road to discovery, and the other headed straight into the jaws of death. Recommended for fans of Studio Ghibli and the work of Hayao Miyazaki.

The vague but evocative term “otherworldly” often gets thrown around when publishers, critics and even creators themselves are forced to pin down and describe the aesthetic of certain fantasy pieces. We all kind of know what that means and yet it falls woefully short, failing to describe the stylistic touches and specific visual elements that actually make the world so different our own. In this case, the character designs and settings of “Isola” tend toward the otherworldly, but MSassyK and Karl Kerschl’s colors and Adittya Bidikar’s letters really make it so.

The rich and somewhat haunting visual experience that is “Isola” #3 starts on the front cover. With a color palette constrained to neon green and pale pink, a wizened humanoid figure with long bony fingers sits on a rock formation smoking a pipe. Seen from below looking up, he seems perched on a precipice, surveying the landscape below. A hand drawn map that fills the entirety of the background underscores this idea of a vast, untrammeled land waiting to be explored. Just below the title runs a series of thin geometric symbols that look like they could be pictographs or ideograms – indecipherable, foreign, exotic. We have yet to enter the book and already each visual element works in concert with the others to create an overriding sense of mystery and intrigue, portending a literal and figurative journey into an unknown land.

Turn back the front cover and even the title page is artfully enigmatic, a monochromatic two-page spread that feels like equal parts ancient map and intricate visual code, like something that might be found inscribed on vellum in an abandoned monastery or, much closer to home, a campaign map created by your favorite dungeon master.

In any case, once the narrative begins in earnest, you slowly come to understand how the incisive use of color subtly frames and informs the story. Stark, monochromatic color washes tend to depict mystical, dreamlike scenes that function as prescient warnings or cautionary glimpses into a fate that nonetheless feels like it can somehow still be avoided. Scenes rendered in full color, however, depict the concrete, knowable actions that unfold before our eyes. These scenes are more lifelike, tangible and realistic. Occasionally, there are also hybrid scenes, rendered in a style that’s mixed, both tangible and not.

For example, when the mystic Pring (he who smokes the pipe on the book’s front cover) leads Queen Olwyn (who is currently spellbound, trapped in a tiger’s body) through the wilderness, much of the scene is washed in a pale aquamarine with other shades and tints of this dominant color. All the while, however, Pring’s purple robe stands out, sharply cutting through the monochromatic haze. Not coincidentally, it seems, throughout the first three issues there are several sporadic scenes, washed in a distinct light purple, that feature an elusive fox who appears to be leading us somewhere. There more time you spend with this book, the more it starts to feel like MSassyK and Kerschl’s colors don’t just augment the story, they actually are the story, helping us to grasp things we otherwise couldn’t see or hope to comprehend.

To underscore this point, the wizard-like Pring counsels our protagonist Rook, captain of the royal guard, as she suddenly regains her senses after an encounter with a primitive, bear-headed humanoid creature, “Breathe fogweed deep into head. Soldier cling to waking. Let it go. See true shape of things now.”

Honestly, “Isola” #3 is not the kind of book that you pick up casually and breeze through over your lunch break. Rather, it’s the kind of book that you read slowly and intentionally when the house is quiet and you’re in your favorite chair with your favorite beverage. Clearly, even three issues in, “Isola” continues to be a slow, methodical build. Even as the story moves forward, writers Brenden Fletcher and Karl Kerschl continue to more plant seeds.

In many ways the narrative arc is pretty simple and straightforward: a journey through the unknown to a distant, mythical land where the answers to the protagonist’s problems wait to be discovered. At the same time, the visual interplay between color, composition and letters makes it much more nuanced than that simple description. Clearly, there’s something else going on here. There are layers upon layers. Visions and dreams and portents.

You need to take your time and really soak it all in. Savor each scene and panel. Spend a moment trying to decrypt the various cyphers and symbols that Bidikar uses to capture the sounds of strange, unfamiliar languages and incomprehensible dialogue. This book and this series reward patience and attention. It’s a visual feast, a puzzle and a true journey into an otherworldly land.

Final Verdict: 8.6 The tension steadily mounts even as Fletcher and Kerschl continue to plant seeds and hint at bigger things to come. Slowly, we are beginning to see the true shape of things.