Gotham City meets Criminal Minds in this terrifying take on the Joker and Dr. Harley Quinn. 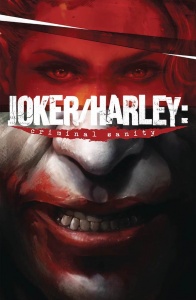 In Gotham City, where heinous acts of violence are a daily occurrence, the GCPD relies on Harley Quinn, a young forensic psychiatrist and profiler, to consult on their toughest cases. But Harley is haunted by one unsolved case—the night she discovered her roommate’s body marked with the signature of a notorious serial killer known as The Joker.

Five years later, the case remains unsolved and a new series of horrific murders occur throughout the city. As the murders escalate, Harley’s obsession with finding the depraved psychopath responsible leads her down a dangerous path. When the past and the present finally collide, Harley has to decide how far she is willing to go—and how many lines she is willing to cross—to solve these cases once and for all.

Written by #1 New York Times and international bestselling author Kami Garcia (co-author of Beautiful Creatures, author of Unbreakable and X-Files: Agents of Chaos) with art by Mico Suayan (Bloodshot: Reborn) and Mike Mayhew (The Star Wars), JOKER/HARLEY: CRIMINAL SANITY introduces readers to a Joker and Harley Quinn unlike any they’ve seen before, utilizing forensic psychiatry, behavior analysis (profiling) and psychological profiles to create a true-to-life take on these iconic characters that is more terrifying than any psychotic fantasy.

What if the concept of criminal insanity were taken seriously around the Joker, rather than labeling him on the blanket term of “insane” and throwing him into Arkham Asylum? What if Harley Quinn was treated as a victim of his, but not inherently drawn into his madness through her trademark mad love in any way? And most of all, what if Batman were not coming to save Gotham from him, despite existing and facing crime families? This collection of concepts comes together to create the scene for “Joker/Harley: Criminal Sanity” #1, masterfully executed under the careful plotting of Kami Garcia.

More than anything, Garcia’s writing plays up an intensely realistic take on the problems of Gotham City, devoid of the colorful vigilantes and supervillains that would normally populate such a narrative even in the darkest of times. While Batman does exist as shown on a news program, as do the Falcone crime family and some other staples of the Batman mythos, focus is pulled down to the level of the normal, mundane people of the DC Universe in a way that exceeds even “Gotham Central.” As if to further emphasize the difference, Garcia uses almost none of the characters famous in Batman, relying heavily on Dr. Quinzel (self-identified as Dr. Quinn likely as part of witness protection), James Gordon, and the yet-unseen Joker himself while populating the police department with a number of new faces instead. Without many people to latch on to as “obvious” survivors of the narrative (itself unclear in the DC Black Label line), Garcia thereby creates the impression that anything could happen.

Central to the series is the actual definition of criminal insanity, something that many comics outright ignore in favor of labeling nearly any villain as worthy of an asylum. As defined by this series, “A person is considered criminally insane if, at the time of the offense, they were not in touch with reality to know they were committing a crime or if they could not stop themselves.” Utilizing information about real life serial killers such as Ed Gein, Richard Chase, Ted Bundy, and John Wayne Gacy, Garcia uses Dr. Quinn’s expertise with psychoanalysis to discern what exactly constitutes an insane killer, and how they are not necessarily exactly the same thing as a serial killer in all instances. The focus provides the implicit question of whether or not the Joker, a known serial killer within “Joker/Harley: Criminal Sanity” #1 and its assumed main antagonist, is actually insane at all, or just malevolent in general. Altogether, this focus in on the nature of mental illness as it relates to criminal activity serves to be very informative, and is likely one that other writers should pick up on going forward, albeit in ways more applicable to the odder nature of the main DC continuity.

Part of what makes this version of the Joker so terrifying is not just his mundane method of making his “smile,” but also the fact that Garcia avoids actually showing him at all. By only showing what the Joker has done as opposed to what he looks like, the mystery deepens and he becomes all the more horrifying by his absence, truly becoming, as the story calls him, Gotham’s boogeyman. Such a lack of direct exposure also has another purpose in focusing on his acts rather than him as a person, since Dr. Quinn, as a behavioral analyst, would want to get to him directly, but be forced to use her work to discern more about him indirectly, forming the film noir-esque narrative at the same time as it creates a more horrific version of the clown-based serial killer than many ever have.

Mico Suayan and Mike Mayhew work together to create absolutely phenomenal imagery in their artwork. The scenes and people are put together in such detail that they appear to be nearly photorealistic, with intense emotion adding to scenes in a way to create the feeling of it being a live action television program and provoking visceral reactions to each new horror, with the overlapping panels increasing this impression of intentional discomfort.

Suayan and Mayhew utilize a relatively atypical coloring scheme. Rather than have color images in the present day and grayscale for flashbacks, the reverse is true. The effect of this choice is twofold, working into the overall feel of the narrative and the characterization of its protagonist.

On the one hand, using grayscale in the present day increases the feeling of a “noir” vibe for the whole series, pushing “Joker/Harley: Criminal Sanity” down into the grit and grime of Gotham without any of the literally colorful figures. Color itself seems to be a facet people can associate with normalcy, or even a semblance of innocence. By removing said color in the present day, Suayan and Mayhew create a sense of innocence lost in the wake of the Joker’s disappearance, a potent, overbearing fear.

On the other hand, related to the loss of innocence, we have the implications for our protagonist, Dr. Harley Quinn. The color in the past helps to show a relatively happy young woman living with Edie, one who all but disappears in the five years since the latter’s murder. What is left behind is her new role as a police consultant, and the combination of the loss of color with her attitude and narration almost makes her feel like a hardboiled detective of the film noir era in a sense.

Final Verdict: 9.0– Far from the typical take on the mad love relationship, “Criminal Sanity” promises quite a lot of terror for crime show fans.