Slowed momentum makes for an even further improved story in the third part of ‘The Totality.’ 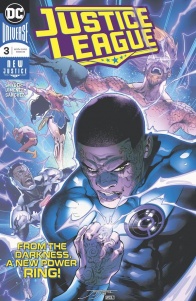 John Stewart: Ultraviolet Lantern? Believe it! Under the influence of the Ultraviolet Spectrum, John Stewart engages in some ultraviolence against his teammates Flash, Wonder Woman and Aquaman. Meanwhile, the rest of the League investigates the scene of the fallen Source Wall fragment, and encounters not only a horde of giant monsters, but a pair of longtime archenemies using stolen Atom technology to literally get under their skin. Best to stock up on Cortizone for that sort of itch! All this and…the Turtle? Yep.

With the speed at which this run on “Justice League” runs, one would expect that the plot would get lost along the way. There are so many moving pieces, there is so much to accomplish… but somehow, Scott Snyder manages to keep things moving by sharpening his focus. While other, even single character-based stories with such a massive mythology change can get overwhelming with an overabundance of action, too little focus on why certain new elements can do what they do, or other such narrative imbalances, Snyder seems to be adept at preventing a grand arc from becoming either too muddled down in minutia or too bloated and fast paced for readers to care very much.

For this issue, Snyder steps away from the grander, sweeping changes of multiple new forces at once, and instead concentrates in on the modifications to the Green Lantern mythos. While he makes some references to the grander plots, such as the Totality and the League and Legion both moving toward it, most of the focus remains on John Stewart, Thaal Sinestro, and the origins and some intricacies of this new spectrum. Splitting the plot between flashback, expository dialogue, and a fight, Snyder maintains focus while still allowing the story to be about the entire League, rather than neglecting any one member of the group. At the same time, Snyder also provides some as-of-yet unseen backstory material for Sinestro, deepening his quasi-heroism in such a way as to make him somewhat sympathetic, even while allying himself with the Legion of Doom. Much like Lex Luthor seems to have gone insane following “Justice League: No Justice,” his turn to working directly with villains toward a probable evil end makes perfect sense in its own twisted way.

In ‘The Totality, Part 3,’ Snyder proves that he has learned from some milder hiccups during “No Justice.” While the scope of the story is cosmic, the implications vast and eldritch in nature, a concentrated focus on how things work and how they came to be, on showing as much as telling, and demonstrating massive power levels in comprehensible forms beyond basic words like “entropy,” “wisdom,” “wonder,” or “mystery,” the threat posed by the entity behind the Invisible Spectrum, coupled with its connections to Sinestro’s past, make it into a far more dangerous, far more effective and terrifying force than the more generic, virtually indistinguishable Omega Titans were beforehand. If Snyder and his fellow writers can keep up this level of balance, even a slower-paced arc can end up being very entertaining.

Jorge Jimenez crafts a variety of art styles for “Justice League” #3, He can be subtle and slow to appreciate the atmosphere where appropriate, such as the flashback scenes or the trip to the Totality, appreciating the majesty around the characters. At the same time, the action sequences, such as the fight against Ultraviolet-possessed John Stewart, showcase a dynamism that merges realistic facial structure with mind-warping science and magic, from Cyborg’s Boom Tube to the Ultraviolet constructs. The Fantastic Voyage-esque battles of Batman and Hawkgirl are similarly dynamic, but in a different way. Their physical bodies are relatively calm, seeing as they have close-ups on the cockpit of their ships, but the fighting they go through in the process of trying to keep Superman and Martian Manhunter from mutating is much swifter, much more fast paced and hectic.

Shadows and light play a big part in the way by which Jimenez characterizes the Legion of Doom and those even temporarily associated with them, far more than the Justice League. The darkened face of a young Sinestro showcases his soon-to-be villainy, while the ominous glow cast against John Stewart’s face from the ultraviolet light distinguishes him from his time as a Green Lantern and the more overt, comforting illumination of his appearance there. Lex Luthor and the Joker both are darkly lit in their pods, only brightened by the glow of their monitors, giving a definite sense of overall foreboding and menace, especially in the case of the mirthful maniac.

Alejandro Sanchez makes beautiful use of colors, illustrating a variety of, often ominous, tones. The glow of blue screens against the faces of Lex Luthor and the Joker both help show their locations and give them a terrifying “light under the chin” monster movie feeling. The bright glow of the ultraviolet light (as paradoxical or even nonsensical as that phrasing may be) clashes against the more familiar, tones of the Justice League, from a common red and yellow for the Flash to the orange and green of Aquaman and more. Most frightening is the coloring on the final page, with the eldritch, Lovecraftian Umbrax cast in a darkened, deep violet light with black tendrils and smoke, making an effective contrast against the familiar colors of more well-known elements of the area of space in which it resides.

Together, “Justice League” #3 continues a winning streak, hopefully one that will not end any time soon.

Final Verdict: 8.0– Wacky and intense, but capable of explaining itself admirably well, “Justice League” #3 continues to show the best of this creative team.