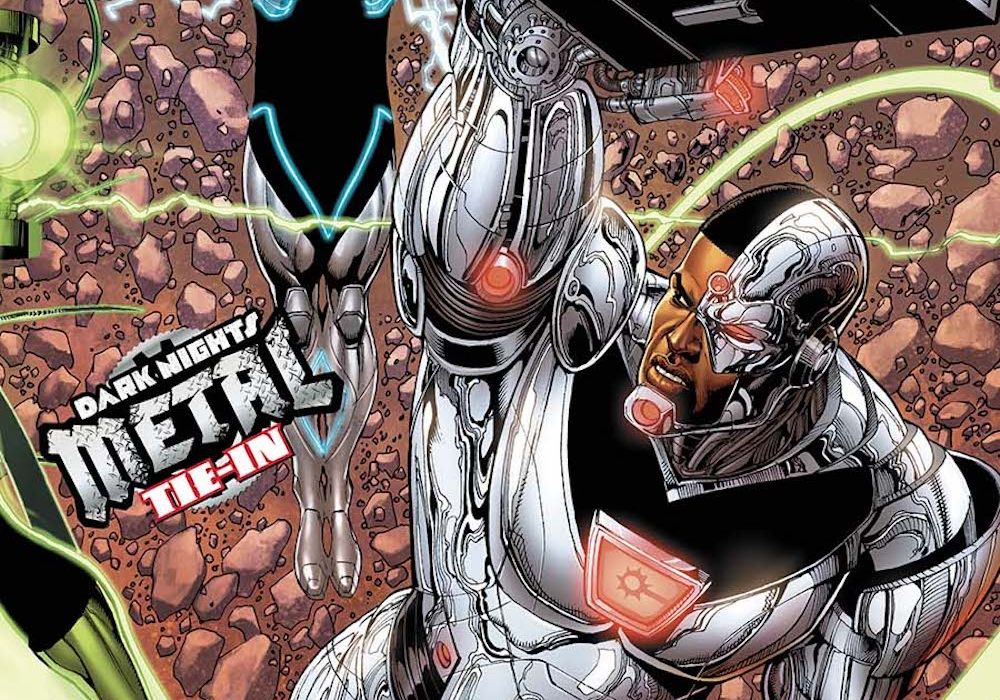 After a misstep with its prior issue, ‘Bats out of Hell’ concludes well. 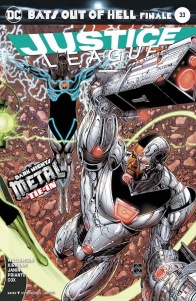 In the final issue of the ‘Bats out of Hell’ crossover, the story works a lot better than the previous go, in “Hal Jordan and the Green Lantern Corps” #32. Rather than fall into narrative traps, “Justice League” #33 tells a simple, Cyborg-centric tale that also furthers the in-universe understanding of the Dark Knights, much like ‘Gotham Resistance’ did previously.

Joshua Williamson focuses in on the “Element X” core within the Mother Box, and while he does not define it by much, the multiversal, potentially infinite possibilities are palpable. The Mother Box is alive, and Williamson’s characterization paints it not only as a potentially malevolent force, but as one that is trying to help, in its own way, in a twist on the classic “humanity lost to the machine” story.

Williamson’s use of flashes of nightmare help to give an impression of the chaotic disorientation brought forth by the Dark Multiverse. The many different nightmares seen by the integration of the Mother Box inside of Cyborg with the Dark Multiverse allows for more monstrous, brief moments of horror. His discussion with his own Mother Box helps to give insight to who Cyborg is, though admittedly he has gone through similar arcs before, such as during “Forever Evil” in his 2.0 upgrade. However, what makes his heroics different is the inclusion of Raven, who, though perhaps the main member who would be useful against the Dark Multiverse due to her darker magic, remains an unexpected, surprising addition to the teams. On account of the intense torture Victor Stone went under, it’s not surprising that Williamson has him decide to take a coordinator role over fighting directly. How exactly his “One Million” upgrade will factor into things remains unknown, but perhaps is to be expanded going forward, especially in issues of “Justice League.”

The main downside in Williamson’s writing on “Justice League” #33 is the overabundance of football metaphors. While they existed to some degree in the previous issue, #32, here they overtake a sizable amount of Cyborg’s dialogue, from “taking one for the team,” to “coach,” to “a strong bench,” to “getting his team pumped up” for a long run, a “Hail Mary pass,” et cetera. For someone who seems to have grown away from his past as a high school athlete to some degree and grown up beyond it, slipping back into that language so heavily doesn’t really make a lot of sense. The nonsensical decisions extend to Stone’s apparently random choice to include his theme song in the beginning of the real battle, which doesn’t really make any sense compared to any previous battles in the canon, and seems to merely be another way to inject “did we mention this is about rock music?” into the ‘Dark Nights: Metal’ storyline, a storyline that appears to only ever be about that subject when it is forced in through references or one-off lines, rather than the far more organically developed plot about actual, physical metal.

Outside of the character moments for Cyborg, Joshua Williamson’s attention to other characters is decidedly minimal. While he does give some effort to the battle against the Dark Knights, the individual members are not given a lot of chance to shine. In essence, the concentration on Cyborg, who admittedly does grace the cover, leaves “Justice League” #33 as an issue of “Cyborg” in all but name.

The Dark Knights themselves remain interesting, though not all of them have much to do this time. Although perhaps it makes sense for attention to be given mostly to the Batman Who Laughs and the Murder Machine, being the field leader and the Cyborg analogue respectively, the other Dark Knights present (all except the Devastator) barely have anything to do. The Dawnbreaker has a single line, and the Merciless, Red Death, and Drowned each don’t even get that much. In all, while it worked well as an overall fight scene, perhaps it would have been better if the issue had a more evenhanded focus on the entire team.

Artwork is very well lain out. The layouts and pencils of Tyler Kirkham and Mikel Janin mesh well with the colors of Arif Prianto and Jeremy Cox, creating spreads that help to show the scope of the opening strikes of combat when wordless, and the vastness of Cyborg’s view of the multiverse when including some additional notations by the Mother Box itself. The overall view is rather nice, not to mention rather intentionally overwhelming. Meanwhile, the more fractured paneling, from the side-by-side shots in Cyborg’s nightmares to the more spidery layout around him when discussing the origins of the Dark Knights, helps to show the more unstructured chaos of the Dark Multiverse itself, as well as showing how easily someone can become lost in its horrors through a fracturing mental state.

Final Verdict: 7.5– Well drawn, ‘Bats out of Hell’ comes to its conclusion with a bit of a bumpy, yet markedly improved final issue.