Comics are fun. They are stories of the fantastic, of heroes that are paragon’s of justice and villain who are demonstrations of doom. And yet, sometimes writers, artists, and even readers, forget the possibilities of the medium and start being content on telling stories that can be just as well conveyed in another shape or form. Not so with “Justice League:” these are the stories that span worlds and characters, pushing the limits of just how much action and excitement can be fitted in one single issue. 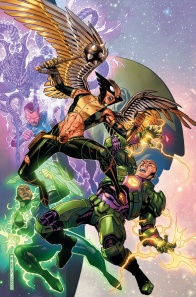 Since the beginning of his run on “Justice League,” Scott Snyder has focused on the Totality, a vast energy released by the breakdown of the Source Wall following the events of ‘Metal.’ And while this can summarize the plot of the arc that ended now with issue 7, it is the thematic underlying of Justice versus Doom that roots the story into something truly meaningful.

Before going further into the plot, high praise must be given to Cheung on pencils and Morey on colors. Every page on this issue, from start to finish, is a marvel to look at, and for different reasons depending on the occasion. First of all, his page and panel layout is very attuned with the pace of the story, offering an almost relentless beat, without damaging the narrative flow. On some pages, panels are mostly horizontal, focusing on the action and on the cinematic feel that “widescreen” layout can offer. On others, panels lean vertically, allowing for multiple characters to express their minds and for the audience to keep track of where they are and how they are reacting to the world around them.

Since the layouts are well-chosen, the interior of these panels are just as inspiring. Cheung knows how to open up the setting when needed, which is clearly shown on multiple situations on “Justice League” #7. Early on the issue, readers get to see a much younger Vandal (and, no, not calling him Vandal Savage, not just yet) amid the frozen fields on pre-history. His regal sense, even on such ancient times requires no exposition to be understood. Later on the issue, when the Flash, Aquaman and, even more prominently, Hawkgirl, take center stage their moments are simply inspiring to look at. They are all different as well, with Barry harkening back to his connection with the multiverse, Arthur with the mastery of his abilities and Kendra simply being an all-out brawler – and key to the story in the future.

Morey’s colors work hand-in-hand with Cheung’s style, and in an issue like “Justice League” #7 there are several components that need their unique look and signature. Highlights on this area include how Morey’s manages the ultraviolet spectrum and how it affects the composition of the scenes focused on the “negative planet” of Umbrax. The bleeding effect on Flash’s battle between the speed and still force have a completely different pallet and feel, same as the battle between Kendra and Luthor. That diversity adds to the feeling that everything is happening at once in the issue, that everywhere is rich in something exciting.

Back to the story that Snyder is telling. The underlying question can be framed as “what if the essence of the world, of life itself… is doom? Is unjust?” It is a powerful question that flips the entire role of superheroes and villains in their battle. After all, can the forces of good really see themselves as an engine for positive change, when the inherent nature of their world it set against them? What is surprising in “Justice League” #7 is how the answer is conveyed in such a straight-forward way… we must simply fight harder to change that nature (delivered, in a modified speech, in spectacular fashion). All of the action is set around that question, all the efforts and struggles ring true when framed in that context.

Two sets of character interactions are exemplary of that. The first, among antagonists, is portrayed between Hawkgirl and Luthor. Their opposing views of the world, their strategies and manner of speech are absolutely spot on. Perhaps even more of a highlight is a quieter interaction between John Stewart and Martian Manhunter. Since the days of ‘Cosmic Odyssey,’ when they were both paired, just to fail on saving Xanshi, have those two had such a powerful, relevant dialogue together. Really emotional.

Finally, unto the reveals of this issue, which shall remain spoiler-free on this review. The same way that the issue itself is a rollercoaster ride, the final pages of “Justice League” #7 reveal further layers to the overall plot going forward, opening doors that readers weren´t even aware were there in the first place. The entire sense of awe and unbridled possibility stays with the audience long after the reading ends.

With amazing art, compelling characters evolving their relationships, plot reveals that are consistent with what came before but surprising nonetheless, “Justice League” #7 is a reminder of how expansive, high-octane, high-stakes comics can be.

Final Verdict : 9.0 – Nothing short of electric, “Justice League” #7 is cover-to-cover excitement, wrapped on some of the best art available today.