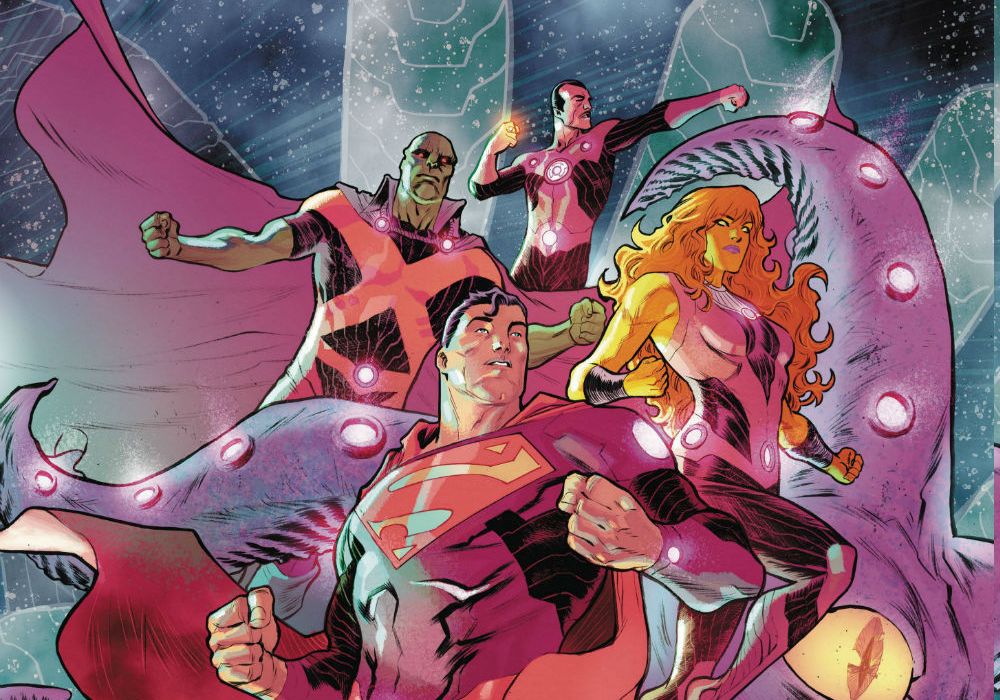 A new event from DC, so closely released to the end of “Metal,” could easily earn the tag of more-of-the-same. However, what Snyder, Williamson, and Tynion with artist Francis Manapul have done, is anything but. This is how you keep the excitement after a successful storyline alive, feeding into a broader publishing line and beyond. 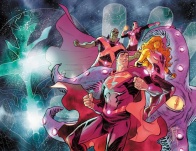 DARK NIGHTS: METAL left the DCU transformed in ways both terrifying and wondrous-and only the Justice League is strong enough to face the threats to come…or are they? Four giant beings comprised of the universe’s major energies-Mystery, Wonder, Wisdom and Entropy-who sustain their life force by devouring planets are on their way to destroy the planet of Colu. The only way to take down this unimaginable threat is for the superhero teams of Earth to forget everything they thought they knew and form new alliances. What secrets of the cosmos will Superman, Martian Manhunter and Team Mystery discover? Will Zatanna, Wonder Woman and Team Wonder awaken alien magic they cannot put back to sleep? What can Harley Quinn possibly have to teach the rest of Team Wisdom? And most importantly…why the heck is Beast Boy on Team Entropy with Lobo and Batman? Find out all this and much more in the most exciting, bombastic event of summer 2018! In this kickoff issue to the four-issue miniseries, after Brainiac systematically takes down all of Earth’s super-teams, the last thing the League expects is for him to ask for their help! Without their aid, his home planet and the universe are both doomed!

“Justice League No Justice” is a continuation of the consequences laid out at the end of “Metal” and a direct precursor to the relaunch of the “Justice League” and “Titans” line of books. As such, the number of moving pieces and components is large, which makes the juggling act the team of writers pulled off even more impressive.

Before going into the story, main plot elements, and characters, pause is warranted for the work by Francis Manapul, with colors by the Hi-Fi studio. Manapul had already proven himself as an artist capable of delivering action and kinetic panels from his past runs on “The Flash.” But here he is allowed to dig deeper into the DC line of characters and locations and his style and breadth really make the most of it.

What will get reader’s attention first are the broad panels and the cosmic-level of threats and impacts this storyline presents. The opening pages, focused on a plethora of Green Lantern Corps characters as they literally observe a dissolving Source Wall is a marvel to look at. From the details of the statues trapped on the Wall, from the energy crackling as they are released from it, to the different facial reactions of the Green Lanterns to the danger they are observing, everything comes together to show how big of a scale this story will be and how many elements will be touched upon before everything is said and done.

Talking about facial expressions, there are at least three moments on this issue where Manapul takes the helm of the storytelling, by delivering more “natural exposition” through sheer drawings and poses than any narration box could. The first of those is how disgusted Guy Gardner is of Hal Jordan upon examining the destruction caused on the Sources Wall: the balance of friendship and irritation is pitch perfect. The second, between Gar and Harley, as both of them react to the unwieldly situation around them is comedic gold. And, finally, the way that Superman carries himself around Brainiac, clearly uncomfortable on having to cooperate with one of his arch-enemies is perfectly in-character for the big boy-scout.

Regarding the so-called Omega Titans (apparently the big-bad of “No Justice”), their design is a bit generic and readers used to the Marvel mythology will quickly jump the gun and call them DC’s version of the Celestials (especially with the new “Avengers” book utilizing these very characters on last week’s release). That comparison would be a fair one and it will be something to be confirmed only upon further examination as this weekly series progresses. Still, a minor setback on such a big achievement on the art department.

Over at script, readers should always be cautious with a large group of writers, as that can usually translate into disjointed, fragmented storytelling. Not so here. Not only have Snyder, Williamson, and Tynion grown very used to collaborating together, it is clear that every page of this issue was written by the team, rather than having thirds of these pages divided among them. And the extra number of eyes and voices surely brought a lot to the table, with multiple character pairings receiving a level of care not usually seen on big event books.

The plot itself is quickly established and, most importantly, the links to past stories are made efficiently, not over-staying their welcome. Readers who have gone through “Metal” and even “Justice League Vs. Suicide Squad” will take away extra points home, but those unfamiliar with those events will not feel lost either. Everything one needs to know about “No Justice” is clearly delineated within those pages and, most of times, explained by the characters themselves on dialogues that ring true.

Some of the best character moments are also the more unexpected; the aggressive banter between Starfire and Sinestro, for example, is absolutely logical given both character’s background. And the provocation between Luthor and Martian Manhunter, individuals so far apart across the moral compass spectrum, is another example of where readers should take pause to appreciate.

Also, for those concerned about the action only taking place in outer space, there is no need for that. This issue dedicates a substantial portion of the story Earth-bound, with a separate group of heroes and villains taking action and directly influencing the main plot in a manner that is really surprising. In fact, the ending (which will remain unspoiled on this review) is one of those moments that leave characters (and readers) wondering “well, what happens now?”

Final Verdict 8.9 – Building up from the excitement that “Metal” infused to the DC Universe and already shaping up to be a strong lead-up to the new phase of “Justice League” and “Titans” publishing line, “Justice League No Justice” is just as beautiful as it is interesting. Here’s hoping that the other three issues of this weekly event further expand and explore this brave new universe!