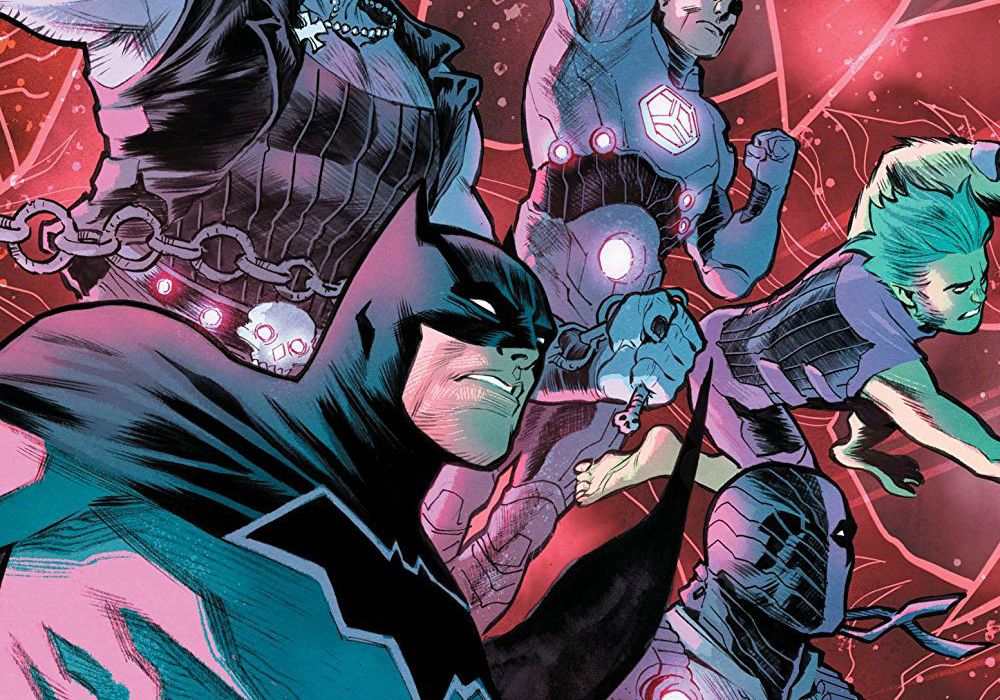 “Justice League: No Justice” is a jarring redesign and status quo shift of DC’s most important superhero team. The comic serves as a precursor to writer Scott Snyder’s upcoming Justice League title. The mini-series is at the heart of the DC Universe and follows-up on some of the most important plot threads from the publisher. Now the first issue of title has been published and readers have a stronger understanding of what they can expect out of the narrative, it is easier to draw a more concrete analysis out of the plot as a whole. Unfortunately, “No Justice” is still in the opening act and has a lot of work to do to finish setting up the title. 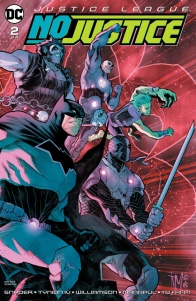 The teams arrive at Brainiac’s home world to find it already in chaos. Only by splitting up and journeying to the four cosmic trees of Colu will they have any hope of saving the planet…but what’s waiting for them will test the true mettle of their new alliances!

With an extreme amount of information doled out in a rapid succession, the debut chapter of “No Justice” read like a forced status quo shift. The next installment is tasked with picking up some of the pieces where the debut left off and trying to stitch a linear title from these events. This chapter is filled with large double-page spreads breaking the individual teams up and having characters start to progress towards the next event. While the series has incredibly high ambition and largely casts most characters into space, the issue is still presented in a high concept manner by flashing back to Earth and showing a few scenes with Amanda Waller’s point of view.

The issue is largely devoted to characterization and making sure the individual teams work with each other. Batman’s team, Entropy, is one of the biggest oddities, pitting Batman, Deathstroke, Beast Boy, and even Lobo together. Writers Scott Snyder, James Tynion, and Joshua Williamson are able to capture the differences in characterization between the team members, with Beast Boy playing a more innocent and naive role due to his age. The narrative is sparse and isn’t given much time to develop any character dynamics past the heroes trying to learn how to work with each other in a team. The tone of the script feels right as the book has a more focused energy pulling each member of the team together to battle an intergalactic threat and the plot slowly starts to take a new direction on the final page.

In this installment of the story, it is difficult to figure out where artist Francis Manapul’s responsibilities end and Marcus To’s pencils begin. The credits indicate that Manapul was responsible for only the breakdowns but some of the art from To seems to carry a large Manapul influence where other panels do not. With each artist being a master of the medium of comics and, given they both share a studio together, the work from each member flows together and readers picking up the “No Justice” trade will likely only catch a slight difference in art. To is responsible for drawing lots of characters here and does a fantastic job making sure each panel with lots of heroes is detailed and carries a firm, dynamic energy packed with memorable poses. Earlier in the issue, there is a Superman face that distinctly seems to carry To’s realistic style but later on, readers catch a glimpse of Manapul’s facial details for Superman.

No matter who is responsible for drawing the composition of what in the story, the most important thing you need to know about the art in “Justice League: No Justice” up to this point is that it is operating with great production values between the work of To and Manapul with the additional art team of Hi-Fi and AndWorld Design keeping the art consistent despite the large amount of characters on-panel at any given moment throughout the story. Note if you are looking to purchase this issue the number of spreads in the comic make for a much more satisfying experience in print.

Even with a messy and inconsistent plot barely stitching “No Justice” together, the series carries enough interesting characters and ideas to satisfy most Justice League fans. If readers are unfamiliar with some of the stranger heroes making up the roster like Sinestro, Starro, and Lobo, this is a fantastic way for DC to introduce you to some of their oddball cast members. With the forced status quo shift largely out of the way, it is easier to accept the events of “No Justice” as they develop each week. Even though the installment meanders and fills the plot with a slight amount of filler towards the middle, the cliffhanger at the end refocuses the events of the comic and should keep readers engaged and interested in coming back.

When thinking about the future of this storyline, I worry the title could become too sprawling and complicated and lose focus before the end as tends to be the case with a large amount of comics written by Snyder. Thankfully, the writer isn’t alone and is working with Joshua Williamson and James Tynion IV. With input from all creators and a messy, invigorating launching pad I wish I didn’t have to wait for next week and could just open up the next issue already.