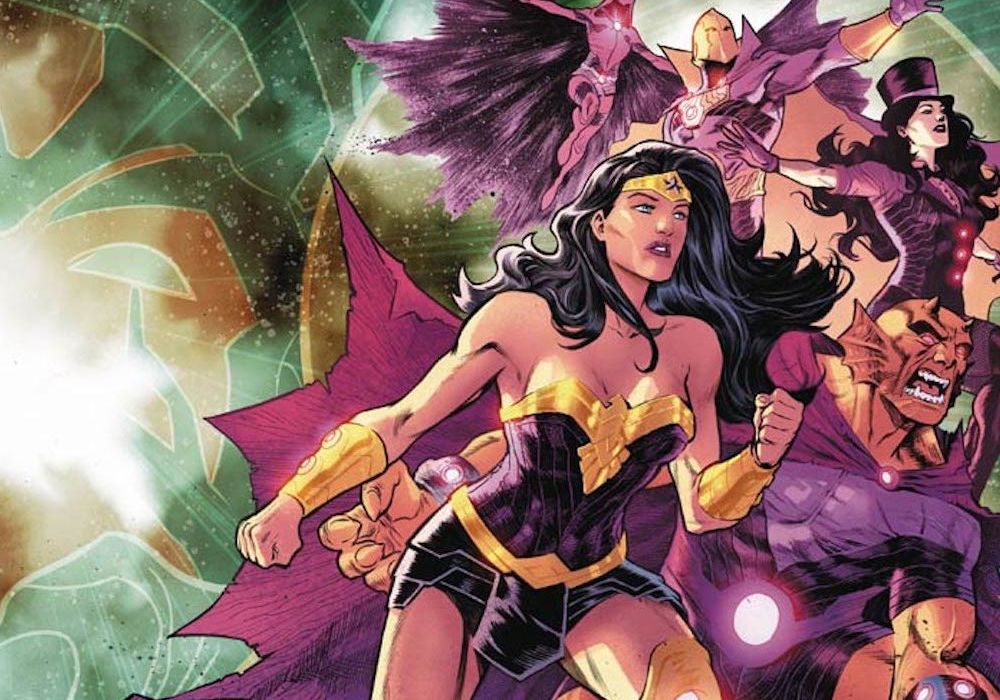 Our heroes rise up against the threat to Colu in “Justice League: No Justice” #3. 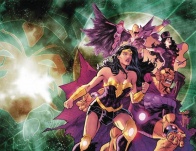 Starfire makes a crushing discovery, Beast Boy uncovers a shocking betrayal, and Cyborg and Wonder Woman are forced to make decisions that will have devastating repercussions for all four teams…and potentially for those they left behind on Earth.

While it is very difficult to tell where each of the writers come into play, Scott Snyder, James Tynion IV, and Joshua Williamson work together very well for “Justice League: No Justice,” a continuation of “Dark Nights: Metal,” on which they had previously collaborated. Much like many issues of the preceding event, the content of “Justice League: No Justice” comes fast and furious, and with two issues less, a weekly, four-issue schedule, and no tie-ins, everything comes together much faster as a result.

Almost all of the exposition in this issue is placed in the hands of Vril Dox, a.k.a. Brainiac 2.0. Through Brainiac’s “son,” Snyder, Tynion, and Williamson explain the ostensibly benevolent villain’s real intent before the unfortunate events of the first issue of this series. Unfortunately, the wording of the exposition leads to reiterating the same points over and over, resulting in a few redundancies that take away from the story. For example, readers probably understood that the heroes weren’t intended to complete their mission without Brainiac the first time it was stated at the end of the previous issue, but it is repeated several more times in this one, and seems to merely take up space.

The action of the issue is more amusing than the aforementioned exposition, with the action-heavy nature of the battles enabling readers to grasp how exactly each segment of the Colu mission is going, without too many complications. The randomized cuts between teams Entropy (destruction), Wonder (magic), Wisdom (science), and Mystery (aliens) keep the conflict fresh, and Snyder, Tynion, and Williamson do not make the actual goals of each group too complicated to figure out.

Balancing against those four teams, the writers bring together the unlikely duo of the Green Arrow and Amanda Waller to their conflict on Earth, showcasing some of the most shocking developments for the latter in recent memory in terms of basic characterization. In all, they don’t really do much, but their part in the story is probably not meant by Snyder, Tynion, nor Williamson to be all that important until next issue, anyway.

While the writing does go rather quickly, and that could be seen to be a benefit, perhaps some more time to slow down, perhaps another issue or two, would have benefitted this plot. The writers seem to feel the need to fill every single piece of action, whereas perhaps a greater struggle could have a heightened effect and allow for more of an overall threat level increase. As they are, the Omega Titans are fairly generic and, while dangerous, not all that interesting on their own beyond being living obstacles. Much like how the Dark Knights were given time to develop in one-shots, perhaps a single, encompassing one-shot to examine the Omega Titans would have benefitted this story, instead of giving them essentially no time to shine beyond being an overwhelmingly powerful force.

The artwork by Riley Rossmo and Marcus To is very dynamic, befitting the very action-oriented issue. All of the different locations, from the Fortress of Solitude to the various locations on Colu, each have their own style, and the different teams fit well into their surroundings, whether they are hacking into a computer system, flying, standing around talking, or slinging magic around. Some of the faces are admittedly a bit odd and seemingly off model, but the overall style remains relatively consistent, making for a very interesting issue on the whole. More blurred effects are used for flashbacks to the original Brainiac and the power of the four base elements of the teams, and close-ups of the facial features are usually well handled.

However, a key element in the artwork is the phenomenal coloring provided by Hi-Fi. The various purples work well together, with each of the teams having their own, albeit similar, styles that work well into the overall color scheme while still staying their own. Purple glows work well with Raven’s dark, seemingly blue hair in times of stress, and these two colors both clash well against the sickening greens of Coluan spirits and the holy yellow lights of Doctor Fate’s magic. A red filter is also put over a communication between the different teams, and it makes for a contrast against the Wisdom Titan’s brilliant blue glow.

Where the writing may fail due to going too quickly, the artwork and coloring of “Justice League: No Justice” in its penultimate issue make for a fairly interesting story to look at. Hopefully the conclusion of this plot can lead to better things to come, but on the whole it seems to come across as an entertaining light show to act as a prologue to more thought-out stories to come. That is not to say that the story is bad, but rather that it could probably be better with some time to slow down and smell the ashes.

Final Verdict: 7.0– A perhaps too-fast story with beautiful artwork and even better coloring.