Strap in and get ready for Warren Ellis’ enigmatic magic to elevate yet another of Marvel’s B-list characters in a ‘Big Two’ book that welcomes the weirdness of its subject matter. 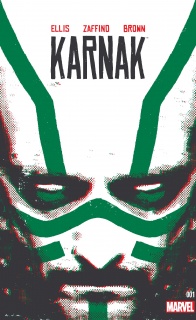 “My curse is that I see the flaw in all things. Systems. Philosophies. Structures. People. Everything. Never forget who I am. I am Karnak of the Inhumans.”

The Inhumans are here to stay. And whether you believe their re-induction into the Marvel universe is the final stage of a carefully plotted creative passion project, or the shrewd machinations of a financially-minded businessman, the results are pretty indisputable: The Kree-experiments-turned-space-royalty-turned-threat-to-national-security have blanketed the post-“Secret Wars” world almost as completely as the Terrigen Mists themselves.

What this means for the long term future of the Marvel Universe remains to be seen, but its immediate effects are most obvious in two titles. Soule and McNiven’s “Uncanny Inhumans” sees Medusa heading up a team of PR savvy peacekeeping NuHumans, while her estranged husband Black Bolt leads a shadowy collection of recognisable Inhumans on a familial jaunt through time. It’s pretty standard superhero fare, and Ken covered it in much more detail in yesterday’s Pick of the Week, but what really caught my eye during the relaunch was the fact that royal advisor and Vulcan/Ninja hybrid Karnak was getting his own solo series.

Initially this book made zero sense to me. In a world based on sales figures and bankable names, why were Marvel taking a chance on a character who has never really been fleshed out further than being the ‘brains’ element of an ensemble discussion? But when I saw that Ellis was picking up writing duties the it all began to add up. Ellis and Shalvey’s recent short-but-sweet run on “Moon Knight” saw Spector get a stylistic and storylining make-over that ran much more than skin deep, adding a clarity and precision to the character that appealed to a whole different audience of comic book fans. So it seems sensible, from a marketing perspective at least, that while the bulk of Inhumans are being woven into the capes-and-costumes forefront of the Marvel Universe, Marvel have asked Ellis to turn his hand to a more ‘serious’ Inhuman book to lend the children of Attilan some sophisticated kudos too.

Luckily, “Karnak” #1 is such a strong debut that any cynicism regarding the conception of this title melted away with the first few pages. Having been brought back from the dead during the eight months lost between “Secret Wars” and now, Karnak has retreated into a kind of self-imposed exile. As Magister of the Tower of Wisdom he ekes out a monastic existence helping NuHumans come to terms with their powers and their new place in the world. Issue one opens with familiar face Phil Coulson requesting Karnak’s help extracting just such a NuHuman from captivity, and closes with a ballet of violence that leaves you itching for more. Safe to say, I feel like this book might end up being a sleeper hit.

As usual, Ellis comes out of the gate swinging. There’s none of the usual exposition that you might expect from a fledgling Marvel title, and no internal monologue to clue us in to the inscrutable Karnak’s inner workings. Karnak’s clipped, precise speech balances nicely against Coulson’s practised patter, and the book quickly finds its footing somewhere between a philosophy lecture and a police procedural (fans of NBC’s Hannibal should have an idea what I’m talking about). In terms of pacing, this book is clearly setting itself up for more connected issues than “Moon Knight”‘s individual outings. There’s a larger arc at work here and this issue alludes to that almost to the detriment of its own singular storyline. While a more looping, esoteric structure works for independent comics that are designed to be read in trades, Marvel may be less impressed with a book that isn’t providing hook after hook page after page.

That being said, “Karnak” #1 provides a clear jumping on point for readers both familiar and unfamiliar with its titular character. Ellis manages to offer up a taste of the Magister’s powers without revealing too much of them, and a glimpse of his dynamic with Coulson whilst still promising so much left unsaid. And as far as creating a purposefully hazy world for Karnak to inhabit, Zefino’s art offers an amazingly unsettling home for the Inhuman priest.

“Karnak” #1 plays out stylistically sparse in every way. From the settings, to the expressions, to the violence, every element of this book feels as far as possible from a traditional superhero romp. Zefino’s heavy, scratchy linework executes this with a strength and determination that helps solidify the tone from the first page. The pace of the book feels driven almost entirely by emotion, speeding up or slowing almost to a standstill depending on the focus of its protagonist. Zefino’s portrayal of Karnak himself is slim-lined, simplified, and serious, and it works so well that it’s probably my favourite element of this issue. Zefino manages to pack so much expression into Karnak’s face that there is no need for any extraneous dialogue, and his ability for subtlety allows Ellis to pack in a surprising amount of sly humour into this dark first issue. Visually, the book revolves around its protagonist, working best when panels are honed in on him. There are a couple of slightly weaker wide/establishing panels in which the sparseness of Zefino’s lines and Brown’s four-colour-at-most palette are left feeling a little exposed, but these are more than made up for in the latter half of the book. Zefino and Ellis take us on a visceral exploration of Karnak’s powers that leaves us with no doubt as to his levels of ability and also the depths of his focus.

“Karnak” #1 is a strangely disparate beast when viewed alongside the other flagship titles of the All-New-All-Different universe, but when paired with some of the more fringe publications, such as Aaron and Bachalo’s “Doctor Strange” and Latour and Rodriguez’ “Spider-Gwen” it almost seems as though this book might be heralding a wave of more experimental new titles in Marvel’s future. Regardless of whether or not that leap is founded on any kind of truth, “Karnak” #1 is definitely worth checking out, if not simply because it’s the best Inhuman title that most people will probably never read.

Final Verdict: 7.9 – Atmospheric, gripping, and glowing with promise. This could be the start of something truly “All-New, All-Different” for the House of Ideas.