“Kick-Ass” #1 marks the return of Mark Millar and John Romita Jr. to one of their most recognizable concepts. This time around though, the titular character is not Dave Lizewski, but rather Patience Lee, an Afghanistan war vet returning to the US to find a less-than-ideal welcome party. Does the change on scenario, lead and themes drive readers away from “Kick-Ass”, or was it just what was needed to reinvigorate the franchise? 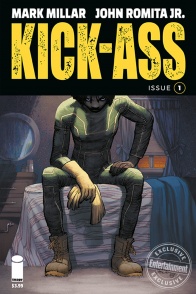 KICK-ASS IS BACK-ready to wipe out the city’s criminal lowlives, destroy its gangs, and save its communities from decay. But there’s a new face beneath the old mask, a new figure wearing that famous green and yellow spandex. Who is this new vigilante superhero? Who can fill Dave Lizewski’s shoes? WHO IS THE NEW KICK-ASS? Find out in the first issue of this new, ongoing monthly series. Comic book legends MARK MILLAR and JOHN ROMITA, JR. reunite for the next chapter of the greatest superhero comic of all time.

The original “Kick-Ass” volumes (and its parallel series, “Hit-Girl”) have always been about ordinary people entering the fray of extreme violence, for reasons that are far more linked to real-world scenarios and themes rather than impossible, supernatural justifications. And while Millar always pushed the boundaries in terms of insane violence and over-the-top moments, it retained that “this could actually happen” type of energy. This new iteration of the “Kick-Ass” mythos seems to double-down on that recipe, as this inaugural issue has a lot going on for it, from an interesting lead character, relevant topics to discuss and some of the best John Romita Jr. art in quite a while.

For a series like this to work, the art must deliver intense action pieces, but also be able to slow it down in private character moments. Millar’s best scripts have always juggled that balance, following pages of characters development and motivation with the ultimate, violent realization of those drivers. Here, Romita captures that into his art and keeps the flow going even on such vastly different story beats. The initial pages showing Patience’s last tour in Afghanistan are intense, with helicopter and car chases mixed with gunfight: it moves forward at an incredible pace and readers will want to revisit those moments to capture all the details on a second reading. What follows that sequence are much calmer scenes back in the US, where Romita shows his skills to keep interest high with what are essentially talking heads, commutes and backyard pool conversations. It is surprising how well it works and how it effectively connects to the final moments of the issue, where the action and violence ramp up again, to gruesome results.

For longtime followers of Romita’s art, what is most noticeable is how the artist improved on his facial expressions. Don’t fool yourselves: the angular and blocky style remain, but it is far more subdued that what he delivered elsewhere (for a quick reference, take a look at DC´s recent “The Silencer”). There is one particular bit when Patience’s husband is introduced that is so precise, with his personality revealed on the twitch of a smirk, that one cannot avoid but to congratulate the artist. His children portrayals remain unusual, with bulky heads seemingly defying gravity, but that is a minor complain to an overall great issue. Over at colors, Steigerwald clearly worked hand-in-hand with Millar and Romita, as much of the issue’s pace is reinforced by the choice of palette: the Afghanistan pasts sequences have very earthly notes, gradually shifting to lighter and brighter shades when Patience is with her family, to dark and dirty towards the end. Do note the effects and transparencies added on a cigar’s smoke over the last few pages: it has a sense of volume and shade that is mesmerizing for something so mundane.

But is the story any good? Yes, if not groundbreaking. Millar opts to use a well-known trope (veteran returns home from the war to find herself in a tight spot, leading to morally-debatable choices), but he executes it in a very honest manner. The script loses little time in over-explaining why Patience chose to dress like Kick-Ass in particular: it simply assumes that that iconography is part of her world’s zeitgeist, aligned with past volumes of the series. Rather, the focus here is on character development: Millar is able to make readers fear for her very quickly, which is not a small feat for someone portrayed as such a powerful and capable soldier. The concern is not for her own physical safety, but on her choices and on the dangers she will potentially put her family through. Knowing Millar´s ability to offer tragic situations, this series has the potential for some truly heart-breaking moments down the road – and it cannot come soon enough!

Final Verdict: 7.8 – While not exploring unfamiliar territory, Millar, Romita, and team deliver a very strong issue, where script and art come together to tell an interesting story with even better characters. This could be the beginning of a new age for “Kick-Ass” that does not pander nor alienate long-time readers.