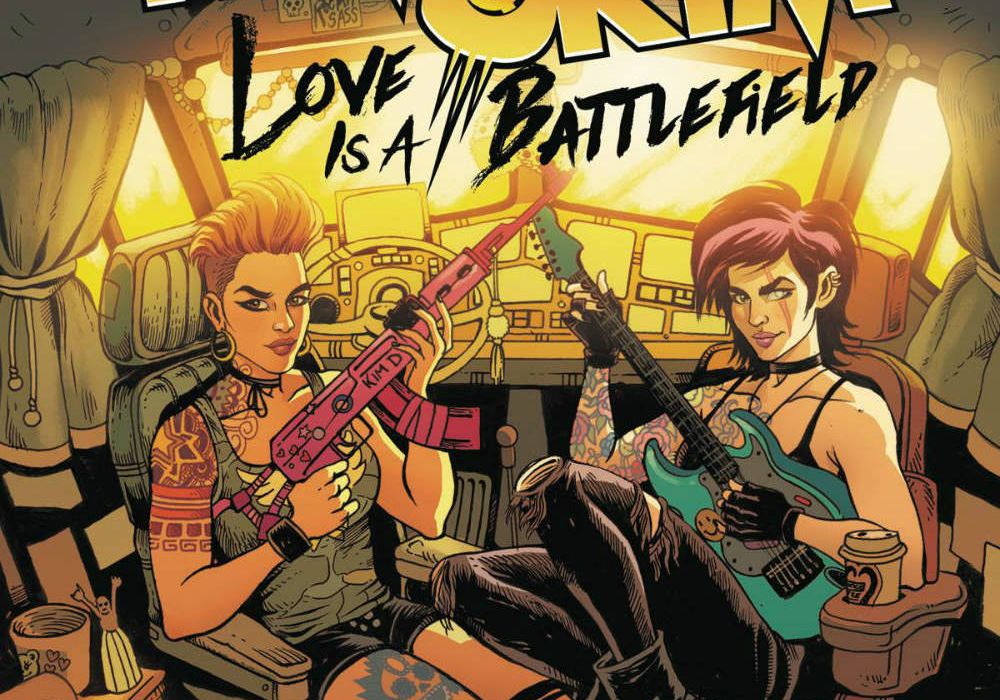 Okay. Rad. After a hiatus that felt longer than it actually was – with edgier character designs and an even more audacious neon-punk color palette – everybody’s favorite interdimensional bounty hunters are back. And this time around, they’re tired of living off Thing-o-Soup and they’re looking for the biggest payout of their goddamn lives. Blorg. Needless to say, things don’t quite go as planned and that’s when shit really gets good. 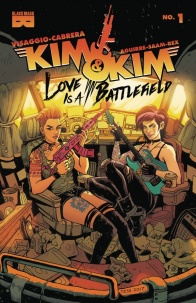 The Fighting Kims finally get the bounty of their lives and Kim D reconnectes with an ex-girlfriend, so of course everything immediately goes catastrophically wrong. This high-flying, rad AF tale of exes and woes is the first in a four-part follow-up to 2016’s summer favorite. Awesome!

Kim Q. and Kim D.’s eponymous, Eisner-nominated first run – originally created and published while writer Mags Visaggio was undergoing her own transition – was nothing short of iconic. It was an undeniably clever, hugely LGBTQ-positive, character-driven romp across time and space that proudly let its freak-flag fly. It was quirky, it was rebellious, it was an absolute van load of fun.

So, after shattering expectations and blowing readers out of the water, the second series arrives amidst a flurry of hype and larger-than-life expectations that would burden any creator. Fairly or unfairly, these are two characters who stand-in for a whole lot of bad-ass women and carry a whole lot of expectations.

Luckily, Kim and Kim themselves feel no such weighty obligations. They’re simply out to get paid. And that’s the first great decision Visaggio and Cabrera make. No noodly, detailed backstory. No lengthy exposition. Just straight into the action, full speed ahead. Sure, there’s some witty banter, but Visaggio masterfully interweaves just enough backstory to give newbies an excellent sense of the Kims’ rather unique interpersonal dynamics, while reminding hardcore fans why they loved these unruly gal pals so goddamn much to begin with.

Incredibly, somehow, the writing and the characterizations feel simultaneously fresh yet familiar as Visaggio expertly navigates the classic creative dilemma of giving the audience more of what worked so beautifully in the first place, without getting redundant, overly predictable or routine. The core of what we loved is still fully intact, but fresh new details are reimagined. New elements are interwoven. The universe – and even the characters – are reexamined and re-explored.

Kim Q., for example, seems even more artfully tatted and pierced than she was in previous issues, sporting her trademark guitar, a shock of fuchsia hair, some killer accessories and a strategically placed vertical scar just below her left eye. This is a not a woman to be trifled with. This is a “punching machine” who kicks ass and knows how to party. (Not necessarily in that order.)

Similarly, colorist Claudia Aguirre reimagines the book’s day-glo color palette in ways that seem barely possible, but undeniably work. There was never any shortage of brilliant neon colors before, but this time around Aguirre dials things up to 11. Combined with Eva Cabrera’s exceptionally confident and boldly assertive line work (with a touch of Manga styling, perhaps, especially around the eyes), the overall effect suggests Lisa Frank on acid during a rebellious goth girl phase. Things start with the rainbow flag, but quickly blow past traditional boundaries from there, exploring the farthest reaches of the color wheel, using bright pinks, magentas and purples that very well may be illegal in certain states. Contrasting nicely with this are cool blue and lavender night scenes that feel unexpectedly desolate and otherworldly – evoking a strange calming presence, if only for a moment.

Outstanding visuals aside, however, it’s Visaggio’s expert plotting that really raises the bar. Kim and Kim, as characters, have always been smart and sassy and tremendously entertaining. They are defiant, iconoclastic role models of female bad-assery, to be sure. Nonetheless, no one ever accused them (or, more accurately, Visaggio’s characterizations of them) of being overly complex, nuanced or multilayered. Indeed, the Kims motivations were always incredibly straightforward or even a bit simplistic (as is befitting an interdimensional space opera of ribald madcap hijinks). With the sudden, unexpected appearance of Kim D.’s ex-girlfriend, Laz Merana, all of that suddenly changes, promising to take the series to great new heights.

Kim D., in particular, is suddenly wrestling with her past (while Kim Q. continues to sort things out with her frenemy/love Saar), desperately trying to make sense of what may ultimately be unknowable, namely, why relationships fail and people grow apart. And growth is the operative word. There is certainly plenty of double-dealing, fist fights and action scenes, but at the end of the day, as the second series begins, these are two queer female bounty hunters with rich inner lives. Finally, after some good old fashioned dimension-hopping and bouncing around from planet to planet, the inward journey begins.

Buckle up. Strap in. Get ready. It’s sure to be one hell of a ride.

Final Verdict: 9.0 – After the stellar debut of its limited series run, expectations for the new “Kim and Kim” were off the charts. With visually reimagined characters and a jaw-dropping color palette, Mags Visaggio and Eva Cabrera’s iconic characters embark on an inward journey that unexpectedly raises the bar.