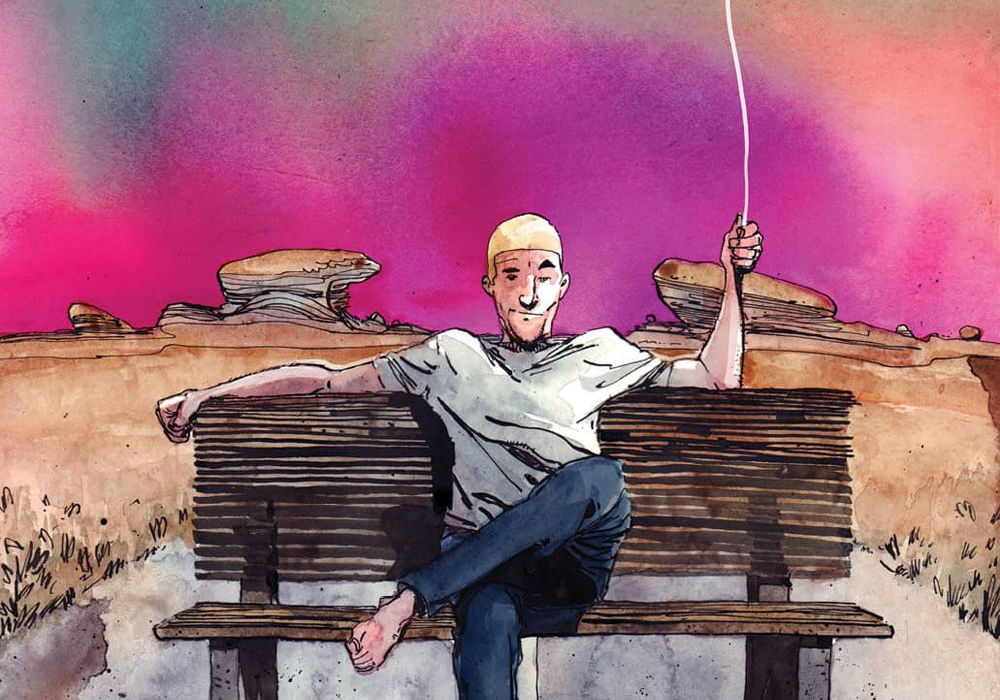 Welcome to the middle of Nowhere, as urban fantasy runs amok with a comical helping of self-awareness. 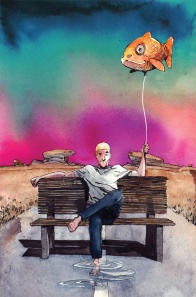 * Eisner Award-nominated writer W. Maxwell Prince (Ice Cream Man) comes to BOOM! Studios with Eisner-nominated artist Tyler Jenkins (Grass Kings, Black Badge) for an unforgettable thriller that explores the miraculous, the mundane, and all the mysteries in between.

* Lovable drunken lowlife Denis awakens on the outskirts of a mysterious village called Nowhere, home to a friendly populace of deformed, mutated, just-left-of-normal citizens-and he has no memory of how he got there.

* But just when Denis starts to regain his memories, his past catches up to him… literally.

* What at first seems like merely a bad trip quickly heightens into a drama of mistaken identities, small-town conspiracy, and high-stakes fantasy fulfillment.

With “King of Nowhere” #1, W. Maxwell Prince introduces readers to the town of North Waherek, more commonly known as “Nowhere.” No, there’s no elderly couple and their dog, but nonetheless it is an unusual location with somewhat strange happenings. That’s what one says when they come across multiple animal-human hybrids and a variety of other seemingly mutated, yet perfectly nice, people amongst a quasi-normal rural setting otherwise, yes?

In any case, Prince’s main protagonist, Denis, seems to agree, with a large portion of the fun coming not from him not pointing out the ridiculousness to everyone, but also not entirely going along with it. Drawing attention to how utterly ridiculous the situation truly is, how incongruent the air of normalcy of the townsfolk seems in contrast to their bizarre appearances, Prince draws out a lot of comedy without requiring outright jokes, treating readers to danger and levity at times simultaneously in a way that definitely showcases his Eisner-nominated skill. The fact that Denis believes what he is seeing is some kind of dream for a large portion of it all further helps to dissociate himself, alongside readers, from the true ridiculousness of his setting.

From the beginning, “King of Nowhere” #1 casts readers into a world of utter ridiculousness without much, if any, context. This sink-or-swim method of storytelling is not meant to say that Prince does a bad job, but rather that he does an excellent one at putting readers in the shoes of the down-on-his-luck protagonist, having basically no idea what is going on and figuring things out at the same rate as he does, merging a sense of wonder with state of confusion. Rather than give everything at once, this expository choice enhances those dual feelings, creating a sense of mundanity to even the most fantastical of creatures shown in such a way that readers are left feeling as though they are the weird ones for questioning it at all.

By introducing the world of “King of Nowhere” #1 in this style, Prince provides a very basic understanding of how bizarre the story is going to be from the outset, but also provides a realistic angle on how someone would react to these goings-on, giving a general feel without explaining much of anything. Instead, the apparent normalcy of everything helps the audience to become accustomed to at least some of it, though not enough to truly disregard people who have the heads of different animals or other related phenomena, and all leads into an even more intriguing event to close out the debut which wouldn’t be as shocking without this quasi-familiarity instilled within each reader.

Much like W. Maxwell Prince, Tyler Jenkins more than shows his Eisner-nominated chops in his own contribution to “King of Nowhere” #1: the artwork. Jenkins utilizes a style that seems to blur the line between one section and another, almost blending one part of a scene into a figure and vice versa, especially when it comes to nighttime scenes. Furthermore, his use of shadows provides even more contrast, introducing sharper lines within the more bizarre imagery. All of these come together especially well in high-intensity scenes such as fights, as the blurred motion enhances the disorientation readers may feel, helping put them into the perspective of Denis himself.

While the eyes have very little variation from one panel to another on individual people, Jenkins uses the rest of the body to show a variety of emotions, from shock to disbelief to anger to terror to determination and more beyond. Even with a variety of different facial structures, ranging from animal-like features to merely having a human face turned in an odd direction to normal human looks, all of the characters feel alive and real, though with the unfortunate uncanny valley effect in regard to the eyes.

Even more than the artwork, Hilary Jenkins absolutely kills the colors with a marvelous, wide-ranging palette and interesting uses of color in general. While the colors themselves seem natural to one situation or another, the very nature of Nowhere itself allows the colorist to enhance the “alcohol-fueled dream” aesthetic, especially before it becomes clear that there is something more going on. Watercolor styles of purple, blue, green, and more all blend together in a changing sky, giving readers the impression that perhaps Denis is just dreaming… unless there is something much, much weirder at work.

The most interesting part about the coloring style Hilary Jenkins uses is the way that individual colors are not entirely beholden to the interior of figures provided by the artwork, even as they tend to follow their contours nonetheless. By having an outline of key colors, from orange out of a jacket to purple in blending with the sky beyond to a more emotion-centric yellow or red, Hilary Jenkins shows that each piece of the artwork is more than just the sum of its parts, providing an added life and unreality to each individual element, even extending as far as the rough way in which Andworld Design provides letters of various sound effects to give a very “street” feel to fighting in Nowhere.

Final Verdict: 8.0– An utterly bizarre introduction is lifted beyond even its well-written script with excellent artwork and even better colors.