Jason Aaron’s run on “Thor” is considered by many to be a modern classic and a bit of a welcomed oddity, considering it’s length. It is with great aplomb, then, that Aaron and longtime collaborators Esad Ribic and Ive Svorcina start to finish it all with this excellent “King Thor” #1. 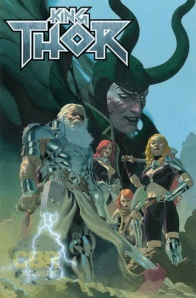 SUPERSTARS JASON AARON & ESAD RIBIC CONCLUDE THEIR EPIC THOR STORY! The creators of the legendary THOR: GOD OF THUNDER series that kicked off one of the most epic runs in Marvel history are back together for one last ride with the almighty Lord of Asgard! Seven years ago, Jason and Esad introduced the Thor of the far future, All-Father of a broken realm and a dying universe, as he stood in battle against the Butcher of Gods, wielder of All-Black the Necrosword. Now that nefarious blade has returned, in the hands of Thor’s all-time greatest enemy – his brother, Loki – for one final, cataclysmic showdown. Behold the book no comics fan should miss – the celebration of the end of a truly Marvelous era.

There is something about the end of a long run by a creative team or writer to a series that is at the same time familiar and experimental. Familiar, because the tone, themes, and characters are well-know by then, and the lenses the writer chooses to portray them, usual. Experimental, because with so few issues left, there is little reason to hold back, which becomes exponential in tales such as this, set in the far future and mostly free of the hindrances of continuity and current events. It is with that combination that “King Thor” opens up it’s celestial gates.

First of all, having Ribic and Svorcina return as the artistic duo on illustrations and colors is a gift. They immediately evoke that sense of a continuous tapestry, going all the way back to the very first volume (‘The God Butcher’). Nonetheless, they do hold some tricks up their sleeves, so not everything is more of the same (despite being a tremendous more of the same).

What may strike readers at first is how large in scale each of these pages look. Most of them have long vertical or horizontal panels, taking up large chunks of the page, which is obviously needed to display the sprawling cosmos, or the gigantic buildings of old civilisations. Ribic does not lose his sense of detail on these instances either, so even a huge planetary explosion, or a skyline-high stack of library books are all rendered in minutia, every book and dust counted.

“King Thor” #1 reads like two books in one, with a part set mostly indoors with Thor’s granddaughters exploring ancient ruins, the second with Thor and his brother Loki trapped in deadly combat. On the first one, facial expressions take centre stage, as well as setting a claustrophobic setting. Panels are a bit more rigid and plentiful. By opposition, on the latter of sections, pages open up to bombastic action, with more fluid panel designs and camera shots.

Aligned with that, Svorcina works with two very different pallets for each of these moments. The indoor pages are set in grays and watered greens, evoking a sense of old and humid surroundings. For the second piece, colors lean towards the bright reds and oranges, with bright shades dominating each page and adding movement to the intense battles.

Plot-wise, Aaron went straight for his source code to bring closure to his long adventure. All they key players from the original volumes are found here, from an older, not-so-wiser Thor, his granddaughters, a villainous Loki, and an adversary who shall remain unspoiled on this review. The themes of inevitability, of worthiness, of ancient rivalry, forever unresolved, all have a strong presence as well.

It is perhaps, the intensity, the finality of it all that speaks louder on these pages. There is no holding back for the writer and, consequentially, for the characters involved on this final struggle. Dialogues surely reflect that, with a renewed dose of vitriol, of evil, that can only be seen in truly desperate times. To balance it, having such resolute characters, so determined on doing what is right, despite all odds, despite all consequences, is reinvigorating. And the surprise reveal on the last page surely leads “King Thor’s” #1 audience to hope for a last hurrah after the plunge.

All in all, “King Thor” is all one should expect from a closing chapter on such a celebrated run. Gorgeous art, familiar, yet provocative characters and themes, all delivered with sharply written dialogue that can only arise from a strong connection with the pieces walking across the board.

Final Verdict: 8.9 – “King Thor” #1 is a worthy (pun intented) beginning of the end, with Aaron, Ribic, and Svorcina pulling their strength to end it all on a very high note.