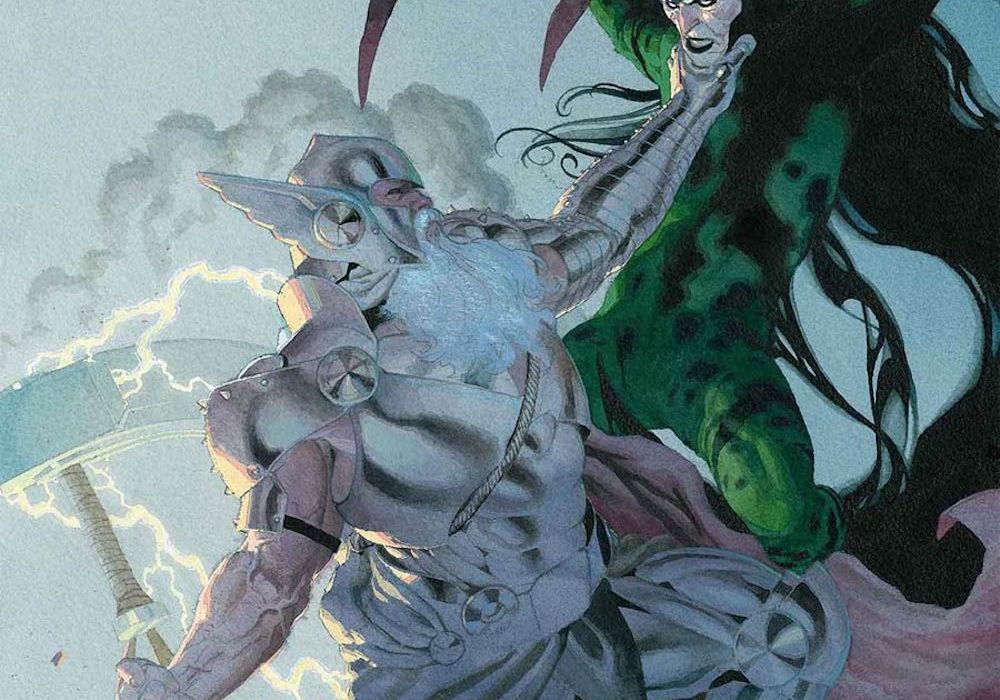 Gods and God Butchers continue their epic clash through this installment to the finale of Jason Aaron’s run on “Thor.” 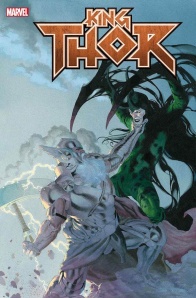 IT’S THE BATTLE FORETOLD FOR CENTURIES:

THOR VS. LOKI IN THE FINAL FIGHT OF THE MILLENNIA!

The universe is dying, and All-Father Thor is its only hope. But to save all life, the greatest god in history must defeat the one person who has always managed to escape his wrath – and that was before he got his hands on the weapon that almost killed three generations of Thor and stripped the God of Thunder of his legendary hammer. Loki, God of Lies, wielder of All-Black the Necrosword, finally faces his brother at the end of all time!

Since November of 2012 with the first issue of “Thor: God of Thunder,” Jason Aaron has crafted his epic tale of gods across the entire saga of the Mighty Thor and the Nine, then Ten Realms. With “King Thor,” he continues down the path of finishing what he started, drawing upon two continued plot lines connected to All-Black the Necrosword to finish the story of his Thor at what appears to be the end of time. After such a high note with “War of the Realms,” how can he keep up the momentum for this four-issue miniseries to close it all out? Such a question is answered with great success in “King Thor” #2, fulfilled with a dark mood alongside overwhelming awe.

While the old All-Father Thor is the protagonist of “King Thor” #2, Aaron’s character work with his antagonists is what really steals the show. On the one hand, we have Gorr the God Butcher, who has had quite an upgrade in the eons since his defeat at the hands of three Thors, even discounting the change in his title. First, there is his very much upgraded control over the Necrosword that has remained bound to him, enabling him to be not only a fearsome foe against the last two gods in existence, but for him to be at a threat level readers had not yet seen from him in order to truly show off the cosmic, godly might at play on all sides. Secondly, we have his personality, which has, while calmed down significantly, still been completely malevolent, reaching toward new lengths in these possibly final issues of his prominence for the time being. This older Gorr is left with a different kind of madness, one that befits his far older status and his solitude of untold years, enhancing a creeping menace above all else.

On another hand, we have the Old Loki, primary villain of “Loki: Agent of Asgard” who has risen once again in the latter stages of Aaron’s saga. In the end of everything, “King Thor” #2 shows him as far more than the evil god he claims to be, even with the corruption of the All-Black having run through him and the various trials he had gone through in the past. Rather than the cackling schemer, Aaron’s take on Loki is just… tired. He is tired and depressed, despairing at the end of time as he faces a foe he believes to be unbeatable, whilst also being weighed down with the idea of his adopted family’s loathing for him in nearly all persons but his adopted brother, the All-Father himself. In spite of everything he had done, in spite of his annihilation of almost everyone, it is not impossible to feel sorry for Aaron’s Loki as his goals are slowly lain out, testing the bonds of brotherhood in this bloody tale near the end of its seventh year.

The main problem that some might find with “King Thor” #2 is its concentration on being part of a conclusion to an overarching tale, to the detriment of any new readers. Not much context is given to what is going on in the story, with readers left to figure it out based on their knowledge of prior installments, especially the ‘God Butcher’ and ‘Godbomb’ arcs of “Thor: God of Thunder” and the various, rather piecemeal parts to Loki’s return, among others. For those who have been following the saga across its multiple writers since 2012, such a central focus on concluding the story may be important, and it is far from unexpected when considering the sheer scope of Aaron’s take on the divine conflict coupled with his departure from the title incoming, but regardless of any of that, “King Thor” #2 is not particularly newcomer friendly.

From 2004’s “Loki” to “Thor: God of Thunder” and beyond, Esad Ribic is no stranger to artwork befitting a tale of gods, nor stories of such a vast scope in general, as seen from his work on 2015’s “Secret Wars.” As the illustrator on the original tale of Gorr and thereby the first Jason Aaron “Thor” story, it is no surprise he would be brought back for its end, and he does not disappoint by a long shot. Ribic’s style is soft, yet highly intricate, crafting pages that feel as though they are more paintings for a museum than pages for sequential art. Each panel has a beautiful magnificence that only further showcases the sheer divine might of all parties involved in the struggle across “King Thor” #2, from Midgard to the Sun and back again.

Much like Ribic, Ive Svorcina is very much a veteran of Aaron’s run, and her colors yet again complement the illustrator’s pencils as exquisitely as ever. Ranging from the darkness of the All-Black to slightly more colorful tones around the gods and the various other characters, all of the hues point toward a sad, horrible time period at the end of its rope, the dull tones seeming as if the very world itself is waiting to end after all that had happened before. There are moments of brighter color, such as the clothing of Loki or the uncannily pale skin of Gorr himself, but most of the brighter coloration comes from fires of ruin, such as Asgard, or from the light of the Sun itself. The effect of it all is one of a ruined end, much like the story itself points in the same direction, and helps to fully pull the entire piece toward its penultimate installment.

Final Verdict: 7.8– The final pieces of this tale of gods and men are coming to fruition, but newcomers are likely to be left behind with at least some confusion.