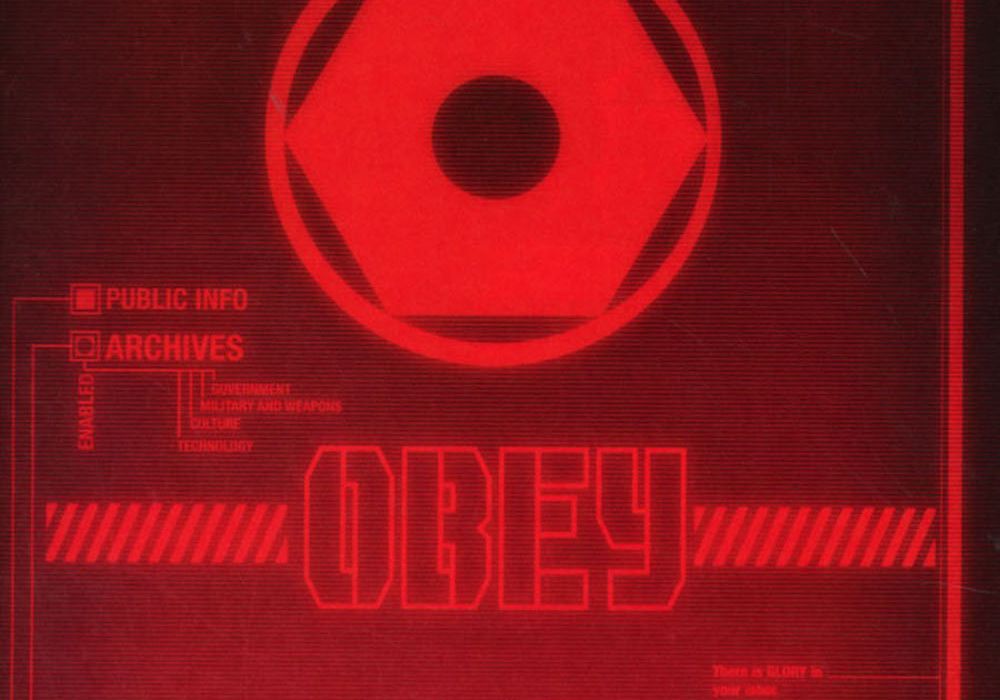 Viewed through a distinctly unsympathetic lens, “Lazarus Sourcebook” #2: Hock showcases the brutality of the regime in place on the east coast of the United States and Cuba, as well as giving a generalized overview of their leader’s paranoid personality and methods. 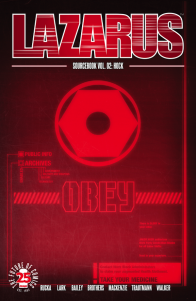 The Cull has ended and the world has changed. The Carlyle Family’s most implacable foe, HOCK, stands as determined and vicious as ever. Venture to the lands east of the Mississippi, where Doctor Hock has the prescription to cure all of your ills…if you can survive the treatment.

The main problem with this issue is that it is far wordier than its predecessor, the Carlyle Sourcebook. Due to having less attention to individuals within the Hock regime, the focus is relegated to a massive amount of prose, provided by Greg Rucka, Neal Bailey, David Brothers, Robert Mackenzie, David J. Walker, and Eric Trautmann. However, this lack of images also works to the advantage of “Lazarus Sourcebook #2: Hock,” as it imposes the oppressive nature of the Hock autocracy on the readers, making the brief appearances of the good doctor’s face, the only person seen in any individual portraits, a comfort from the lack of any human interaction beforehand. Overall, the effect is akin to the images of “Big Brother” from George Orwell’s famous dystopian novel 1984.

This is not to say that the issue is badly organized on the whole. In fact, its decidedly frank look behind the “Pharma Curtain,” likely from a Carlyle perspective, helps to give a full experience of what it means to be a part of their culture, in contrast to the more positive self-reflection given in the Carlyle sourcebook before it. Propaganda is identified, whether overtly or by implication that others’ stories are lies. The stratification of the society is explained in depth, along with brief, interspersed explanations of Hock territory history.

The look from Rucka and company at the society and territories involved combines to create a terrifying image, one far worse than that given by the preceding book. The writers do not treat their audience as completely ignorant to the way of life in the early 21st century United States. Instead, the authors seem to assume that their readership has at least a basic understanding of the three-branch workings of the United States federal government, with bonuses to those who are knowledgeable about certain tourist attractions on the east coast of the country. Through this belief in the readers’ intelligence, Rucka et al. provide their audience with feelings of horror as they systematically gut and repurpose their memories with the pure, undulated autocratic systems of a technocratic, pseudo-narco-state. Of particular note is “Camp Kingdom,” a boot camp that is sure to leave any who are aware of its implications with nightmarish visions of happy memories gone awry.

“Healthcrime,” which seems to be very broadly described, is reminiscent of Airstrip One’s “thoughtcrime,” with high punishments for anything related to the “health” of the society as a whole. Much like how 1984’s society seemed to police thoughts themselves, Hock’s pharmaceutically-induced control requires extremely intensive knowledge of every single citizen, to the point of a level of control rarely seen outside of the gravely ill in modern times. This authoritarian methodology is shown for how overly controlling it can be, as well as the amount of resources needed to keep it in check.

The difficulty of maintaining a dictatorship is shown not only through the ridiculously extreme medical knowledge, but also through analysis of the dictator himself, Doctor Jacob Hock. The elderly doctor’s personality, especially his antipathy for his archenemy Malcolm Carlyle and his dangerously increasing paranoia, is front and center. In contrast to how Carlyle’s sourcebook is more about the entire family and its social system, Hock himself is the only real focus, emphasizing his egocentric nature and his reluctance to delegate any authority abroad, even when he is forced to do so.

What little focus there is on others in Hock territory is still of note, if for nothing else but its scarcity. Readers can pick out possible allies for the Carlyle alliances if they look hard enough, which could, much like the revelation of a certain character’s identity in the previous sourcebook, lead to clues of how the story of “Lazarus” may develop going forward. Furthermore, attention to such developments as the actions of family Bittner and Jonah Carlyle in issues of the main comic are brought to light, drawing attention to the underlying unrest at play in Hock territory under his veneer of stability, as well as the consequences of an allied vassal family’s defection.

The long talk about the society comes at the expense of the Technology tab of the sourcebook. All that is shown is the drugs used, rather than any look into the armaments or armor used in combat, despite talk of nanotechnology research.

Still, the entire issue plays very well in general, giving the feeling of menace and hatred that would fit well into a Carlyle mindset about Hock while still teaching about their culture. The few pieces of artwork from Michael Lark, Brian Level, Tyler Boss, Santi Arcas, Owen Freeman, and Trautmann have a feeling of the oppressive nature of the society, with their darkness and the aforementioned lack of any portrait attention except for Hock, in contrast to the many portraits shown for Carlyle’s more family-based, corporate focus.

In all, the issue comes across well, but could do with better separation between sections, allowing for a more comprehensive view of the society in areas that are of interest to the war-based focus of the storyline thus far.

Final Verdict: 7.5 – A very interesting take on the more overtly villainous faction of the two main families in conflict, the second “Lazarus” sourcebook seems that it would do well with a little more artwork, even in the form of portraits of important figures, to space out the writing, give a more comprehensive look at technologies, and make it easier on the eyes of comic readers.