What do you get when you mix a fast-paced story about kaijus wrecking havoc, supernatural energies, a love story, and a kinetic art style? “Leviathan” #1 comes strongly out of the gate, with the passion infused by the series’ creators John Layman and Nick Pitarra being felt from the first page down to the last. 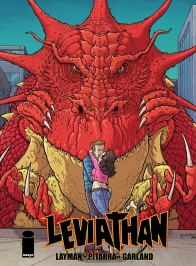 SERIES PREMIERE! Poor Ryan DeLuca didn’t buy enough beer for his party, and while he was out on a beer run his idiot buddies busted out some mystical arcana and performed a summoning ceremony-a ceremony that summoned a giant monster from hell! Join multiple Eisner-winning writer JOHN LAYMAN (CHEW) and Eisner-nominated artist NICK PITARRA (THE MANHATTAN PROJECTS), along with soon-to-be-nominated-for-best-colorist MICHAEL GARLAND (THE MANHATTAN PROJECTS) for an eye-popping, face-melting, reality-defying, nonstop rush of pure adrenaline.

It is always refreshing to see creators so committed to a concept and art style. More often than not, new projects can be presented as genre mixing, or alternative takes on what has come before. And while this is fine, there is a particular bonus when a story feels so different and unapologetic as “Leviathan” does. This is a project that should stand out from the shelves, from cover to surprising ending.

First of all, the visual narrative provided by Pitarra on design and drawings, as well as Garland on colors, is absolutely mesmerizing. This is a level of detail that should force readers to stop and simply take the pages in. Every brick, facial expression, and monster scale is fully rendered, to the point where panels truly feel like windows into completely new worlds. What is perhaps more surprising is that, despite this level of detail, the visual progression of the story is not hindered. It is always very transparent and easy to determine what is going on, where the audience’s eye movements should be at and where the focus of the story is.

A large part of this achievement by “Leviathan” rests on the smart use of perspectives and distinct character designs. The artistic freedom that Pitarra has allowed himself opens up possibilities from the mundane (like the introduction of the series’ protagonist from the inside of a refrigerator) to the fantastic (like the animated-like inclusion of hearts to quickly convey emotion). Still leaning on this stylized approach, all characters have a similar “alternative anatomy”: that is to say that no character portrayal attempts to be normal and, yet, they all feel consistent with the design aesthetics. More than that, within that frame, Pitarra gives each of them unique features, in a way that all characters come across as separate individuals. This is a world that feels inhabited my real people, as deformed as they might seem.

When the story really explodes — and explode it does — the partnership between Pitarra and Garland is most obvious. There is a splash page towards the middle of “Leviathan” #1 where the titular beast is shown in full glory that is truly gorgeous. Colors and line work coming together to the benefit of both, as fire, scales and signposts, all dressed in red, demonstrate a fluidity and clear delineation on par with the industry’s best. On more than one occasion, and certainly on that splash page, the art style and delivery shows signs of early Geoff Darrows work, which is as good of a compliment than any that can be given.

Over at plot and script, Layman adopts the same frenetic pace to story evolution as the art does. The mission statement and lead characters introduced earlier in the issue materially change throughout the issue, leaving the readers guessing what else might happen when all rules are off. There is a sense on unknown and of possibilities that makes each page a mandatory reveal. Also, the layer of mystery as to what caused the emergence of “Leviathan” harkens back to the early issues of “Y, the Last Man”, where multiple characters and situations could be the cause for the trouble, with all others being red herrings.

Character development is also very interesting. Although surely tilted to be more on the comedic side, “Leviathan” takes its time to flesh out both leads and supporting cast. In the same way that the art design makes them look unique, dialogue and motivations make them sound unique, adding further gravitas to the terrible events that happen around them.

In short, “Leviathan” excites both visually and conceptually, on a series debut that keeps the audience interested, guessing and curious to know what will happen with nuanced characters, all amid a detailed, yet not bogged down, art style.

Final Verdict : 8.4 – “Leviathan” #1 offers its audience a fresh new world, fully detailed and populated with compelling individuals, challenges and mysteries. The creator’s passion for the project is just as obvious as it is contagious.