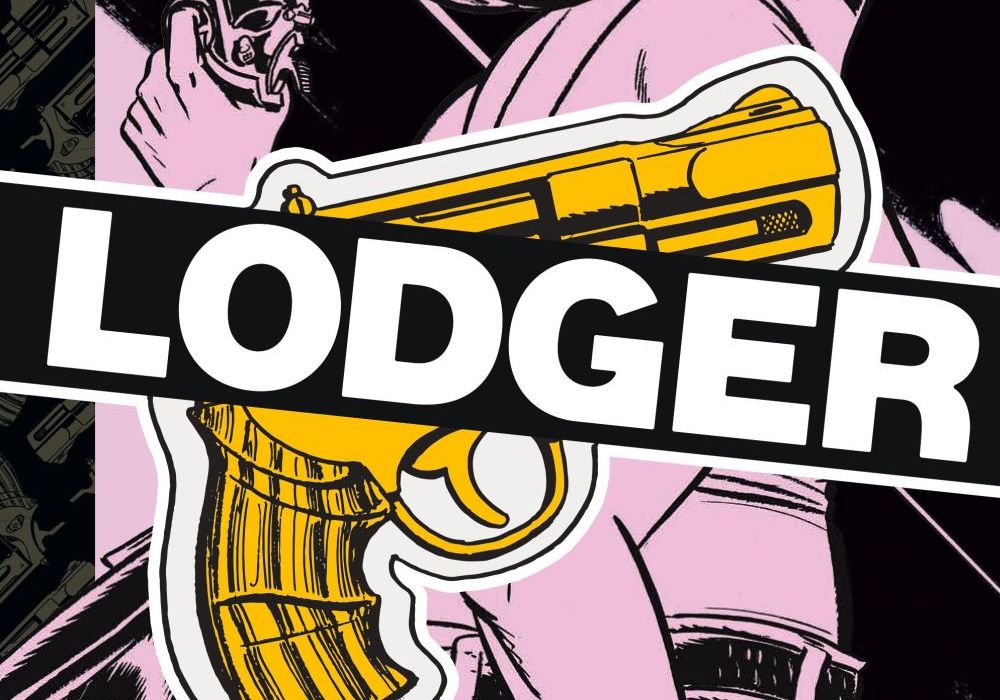 The Laphams have cred. Their “Stray Bullets” saga was hailed by fans, critics, and fellow creators as a longform crime noir masterpiece, so the first issue of “Lodger” arrives on stands with a certain amount of built-in cache that is amplified under IDW’s curated imprint logo, Black Crown, but does it live up to the high expectations? 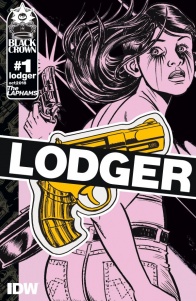 A handsome drifter murders his way through the midwest while hiding in plain sight as a travel blogger, leaving families in shreds and body bags in his wake. Ricky Toledo was fifteen when she fell hard for “Dante”—until he killed her mother and got her father sent to prison for it. It’s three years later, and Ricky will stop at nothing to get revenge. Lodger is a dark, grimy, psychological thriller—a game of cat and mouse between a broken young woman and a serial killer—and like all the best crime noir… a twisted love story.

Right out of the gate, “Lodger” demands much from the reader. The Laphams use the ubiquitous storytelling convention of the overlapping narrative, here there are text boxes that don’t “line up” with the actions readers are witnessing in the panels. The thing that makes the Lapham’s use in “Lodger” so challenging is that the two narratives have thematic and geographical similarities that seem to imply that they originate from the same source, our protagonist Ricky Toledo, a young woman on the trail of someone, someone vile and villainous who deserves what he has coming to him. It’s this initial confusion that sets the tone for the books ability to keep readers off-balance, unsure what exactly they are witnessing. The book’s solicitation text almost increases the confusion rather than providing clarity. In other words, readers shouldn’t expect to be spoon-fed, and if you have a good grasp of what’s happening after a single read of this first issue then you are way ahead of this reviewer.

Lapham’s art style will be familiar to fans of “Stray Bullets” and in “Lodger” he continues his tradition of black and white work with effective use of mood-enhancing chiaroscuro. There’s a variety to the panel layouts throughout, but the book mostly adheres to variations on an eight-panel grid. There’s some solid cartooning here that is grounded in real and unstylized anatomy and architecture, which make the noir proceedings even more familiar even as confusion about the primary narrative thread abounds. Where is this book going? Only the Laphams know, and they seem content to use this first issue to create a mood of revenge-fueled despair rather than to give too many clues on where the story might lead.

To be sure, the book is grounded in the conventions of noir storytelling. One of the stalwart aspects of noir is the appearance of passion even if void of tender emotion. Here, the Lapham’s story is clearly propelled by an elemental thirst for revenge on someone who has wronged Ricky, but readers do not yet know the extent of the crimes perpetrated by the story’s antagonist. As for the antagonist, it’s seems as if he has some supernatural power to defy physical laws by making himself grow younger and more virile. This adds an element not common in real-world noir conventions. By the end of the issue, only a unique facial marking clues readers into the fact that something here is out of the ordinary, and instead of packing an emotional punch, it leads to even more confusion. What is going on here?

“Lodger” ultimately feels confusing by design, and this first issue is more about setting a tone than communicating story beats. While we may be promised a game of “cat and mouse,” we don’t yet know exactly what has provoked this pas de deux. Ultimately the book feels a bit flat tonally, interesting but flat. We don’t yet know what the stakes are. Why do we care about what’s happening? Oftentimes, there is a slice-of-life quality to independent cinema that asks viewers to get on its wavelength and play an empathetic role in the proceedings. It’s why independent cinema does not have broader appeal. It is simply not designed to do so. “Lodger,” which seems borne out of the same primordial soup as underground comics, seems to be asking for the same commitment from readers. In other words, this may not be for you, but if you can show patience and the willingness to give yourself over the these characters, you will ultimately be rewarded.

Where “Lodger” really sings is in the painting of small town society and its associated murkiness. Far away from flashy urban headlines and concrete corridors, a life exists that is alien to many. In this place, disturbing things happen that simply do not in the city, and people take vengeance into their own hands. A sense of community has real currency. People know their neighbors. Connections between people are more obvious and far-reaching. On the other hand, it’s in the rural that a character like the Lodger can exist, moving from town to town, wreaking havoc in a manner that would be impossible within the parameters of an urban landscape. As census numbers indicate that with each passing year that more people live in cities, rural lives become more alien, and in the case of “Lodger” more foreboding.

“Lodger” may have things to say about rural life, but frankly, after this first issue, it feels like a book that seems disinclined to make pronouncements on anything. Instead it feels like a book that is content to tell a grimdark story that may have limited broad appeal in a way that is inherently unsettling. In a way, its obtuseness may be its strongest feature as well as its biggest pitfall. It may draw readers into its web of mystery or alienate them with its maddening trail of breadcrumbs and somber tone.

Final Verdict: 6.5 – “Lodger” may get under your skin just as easily as it may be dismissed as a book unconcerned with what readers think about it. There’s an admirable quality to that, but for a first issue, it may be a foolhardy way to hook readers.