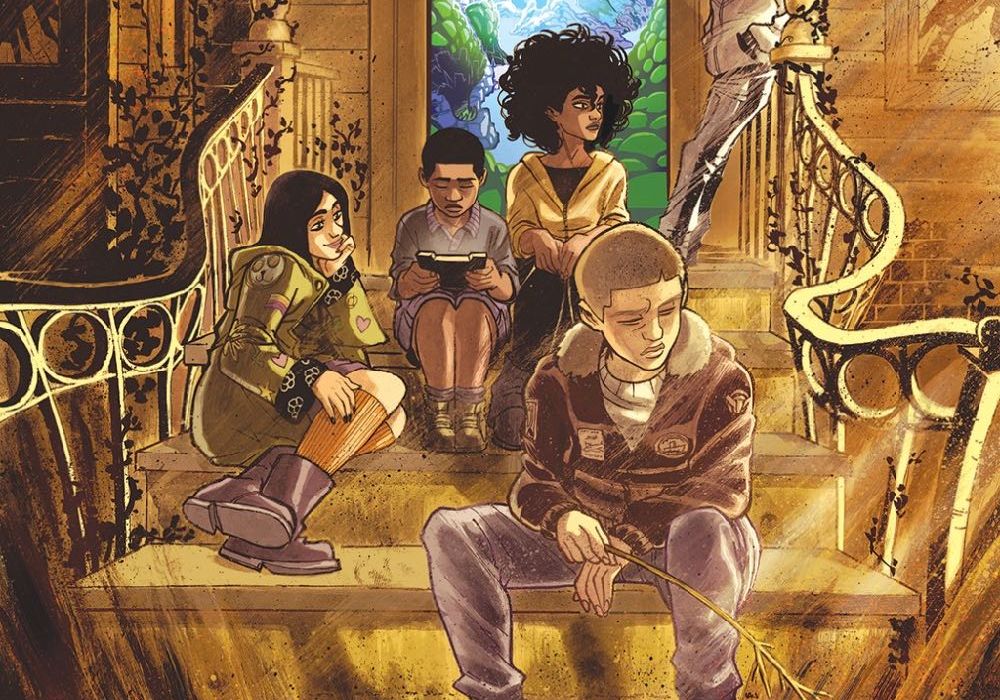 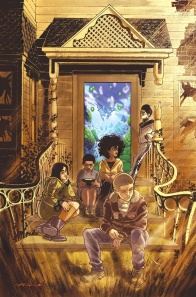 Following a brutal dust storm that drove them to seek shelter, the teens decide to venture out into the mysterious ghost town of Duster’s Wake to search for supplies…only to find that they are not alone.

For much of the debut issue, “Low Road West” felt like a fairly typical post-apocalyptic tale. Writer Philip Kennedy Johnson and illustrator Flaviano did an excellent job of establishing a crumbling, hyper-militarized, burnt-out husk of a world in which “our allies have become our enemies” and “Tommy Tango could be anywhere, at any time.” It was a solid premise, if not particularly unique or different. Sprinkled throughout the story, however, were a few well placed hints that not everything in this world is exactly it seems. Dig beneath the surface, down to a deeper level, and there are definitely other, more ancient forces at work.

In “Low Road West” #2, the creators continue to invoke post-apocalyptic classics like “Mad Max” and Cormac McCarthy’s “The Road,” while intermixing elements that pull the narrative more in the direction of “Stranger Things” than anything else. Again, it’s not exactly an out-of-the-box, breakthrough idea (especially in the shadow of the aforementioned Netlflix smash hit series), but it is solidly constructed, with a likable ensemble cast and enough subtle twists and turns to keep you fully engaged.

One of the definite highpoints is Johnson’s story structure. With strong, clear narrative beats in 3-5 page installments, the story never lags or even vaguely bogs down. Rather, it flows quite briskly, with one scene ending high as the next begins with sharp focus and narrative intent. There is no filler here, just action and dialogue that drive the story forward or further illuminate character dynamics.

In fact, perhaps the most refreshing feature of “Low Road West” is that its teen and tween protagonists are allowed to act like kids, jockeying for position within their newfound social hierarchy, evading honest answers to tough questions, making mistakes and being scared. These aren’t teen superheroes or cardboard cut-outs, they’re well rounded human beings with backstories, hopes, fears and goals.

Examples of this teen-centered ethos – and aesthetic – are found throughout this issue, but one of the most striking is when a new teen character appears. After shooting a marauding dog through the mouth with an arrow to send the pack yipping away, she says matter-of-factly, “My name’s Harm Wanna see some stuff I made?” Moments later, duly impressed, Shawn says, “This is so McQueen. Did you make all this stuff?” These are kids being kids, acting and speaking a bit too impulsively before eventually settling down to grapple with weightier issues. The fact that the slang term “McQueen” is never really explained only adds to the dialogue’s authenticity and quirky charm.

Visually, inker Flaviano’s art also tends to accent the book’s youth-centered look and feel. Wardrobe choices, in particular, underscore in the characters’ childlike innocence and optimism, even in the face of desperate circumstances. They may be fighting for their very existence in the middle of a vast, empty wasteland, but they’re going to be stylish and look good while they do it. Similarly, the characters outfits further illuminate and underscore their distinct character traits.

Amir’s instantly iconic nerdcore track suit gives him a bookish quality that stands out from the others. Shawn’s fake-fur-collared bomber jacket fits his glorification of all things military, not to mention his paranoia and constant fear of unseen enemies. Angela’s boots, high socks, short dress and iron-on patch studded hoodie give her alt-fashion street cred that far surpasses the others. Like any great teen ensemble their key strengths are clear from the start, while slowly and subtly revealing other traits and flaws.

Miquel Muerto’s colors also excel, as they did in the debut issue, though gone is the dramatic contrast between his sun-scorched yellows and interior blues and purples. The end of the first issue saw the teens fleeing from a dust storm. In the wake of that event, a hazy orange-rose twilight lingers. Outside, an eerie, almost neon glow hangs heavily, slowly lightening in intensity throughout the book. Inside, the blues are not as deep as before, tending toward aqua instead, cleverly foreshadowing the intense green and yellow palette that dominates the last page and half, including the final tableau.

Ultimately, this is a book where everything just works. The story structure is finely tuned and efficient; the artwork echoes the book’s themes and story dynamic; and the colors are distinctive and well considered, presenting a post-apocalyptic world that is simultaneously familiar and subtly different. As the story evolves and continues to surprise in interesting ways, it only stands to get better. As the second book in a 5-issue miniseries, there’s not a ton of time left to do that, but given what we’ve seen so far, I am confident that the story will finish strong.

Final Verdict: 8.6 “Low Road West” #2 builds on the considerable strengths of what worked in the debut issue, while further fleshing out its likable ensemble cast and adding a major twist. With two solid issues in place, don’t sleep on this miniseries.