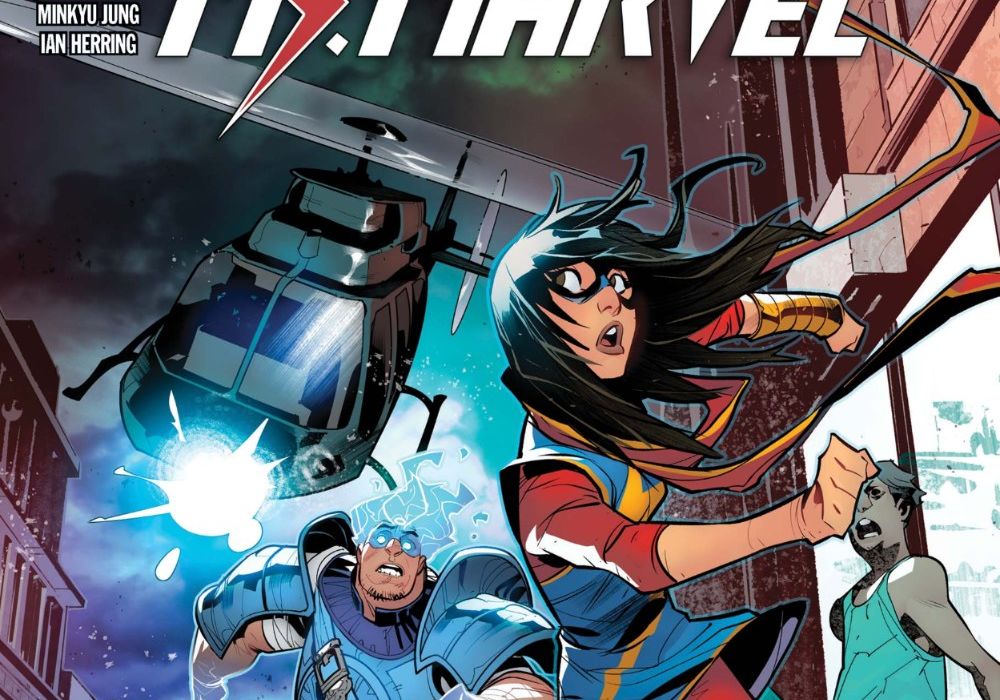 “Outlawed” is in full swing, with “Kamala’s Law” forcing underage heroes into hiding. So how does Kamala herself, the person the law is named after and also the magnificent Ms. Marvel, feel about it? Let’s find out in this issue. 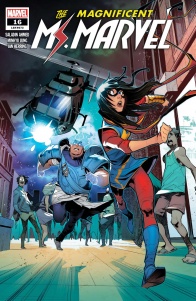 AMULET RETURNS – just in time for C.R.A.D.L.E. and Dum Dum Dugan to crack down on the teen heroes of Jersey City! An arcane horror threatens everything Amulet and Ms. Marvel hold dear – but can they do anything to stop it when they could be arrested at any moment?

“The Magnificent Ms. Marvel” #16 has two tasks at hand: the first is to continue the “Ms. Marvel” storylines and plots that have been progressing these past few issues. The second is to work with the “Outlawed” storyline impacting all the young hero comics. Fortunately, Saladin Ahmed manages to balance both of these storylines nicely, weaving them together into a cohesive narrative and even providing a surprise at the end (which I will not spoil here).

First and foremost, it answers a question that will be bugging anyone who wonders why Kamala will let Kamala’s Law go unchallenged: she’s upset about being used as a symbol for a cause she doesn’t support, but her parents won’t allow her to make public statements. As this is her secret identity, and she is still a teen, it’s not something that can easily be worked around.

The effects of Kamala’s Law can also be felt throughout the comic, both in the foreground and background. There’s no shortage of debates between the characters, mirroring today’s dialogue (for lack of a better word) about our own government and news sources. Some of the characters have valid reasons, like Zoe’s concern and trauma after seeing Kamala get hurt. Others have less compelling arguments, like Kamala’s parents bickering over whether TV or newspapers are more reliable news sources, but let’s be honest, that’s pretty realistic dialogue.

A less morally complex issue is the matter of C.R.A.D.L.E., the task force sent to bring in unauthorized teen heroes. There’s nothing subtle about them at all, from the black armored uniforms to the weapons they gleefully carry to their absolute eagerness to arrest anyone at the first sign of resistance.

Please note that I said they’re unsubtle and lack moral complexity – not that they stretch believability. In a previous year, I might have said they’re over the top, but we’ve seen authority figures display very similar behavior in recent months.

It’s hard to write about anything related to “Outlawed” without drawing the inevitable “Civil War” comparison. It’s hard to forget how the pro-registration side in “Civil War” crossed a lot of moral lines, but even then it was a matter of hero vs hero – there was supposed to be some moral ambiguity and valid points on both sides. There is no such ambiguity here. We don’t see C.R.A.D.L.E. as anything more than government-backed bullies abusing their power, which is nice for those who like clear moral lines, but less appealing when you see characters try to side with them.

Still, the matter of C.R.A.D.L.E. and Kamala’s Law is only half the story, and it helps segue over to the other half – Amulet, a recently introduced hero who helped Ms. Marvel in the past.

This is where we learn more about the character, including his backstory, mission, and mythological ties. He’s a fun character with a good backstory – a legacy and a wide variety of potential monstrous foes to fight. I could easily see him getting a spinoff or teaming up with other heroes. As it is now, he and Ms. Marvel make a good team, which made the scene where he reveals his secret identity but she just can’t (due to her guilt over Kamala’s Law) all the more impactful.

Now let’s talk about the art. Minkyu Jung provides the illustrations for this issue, backed up by Ian Herring’s color work.

Minkyu Jung’s linework uses a nice balance of detail and simplicity. The character designs are all clear and solid, utilizing distinct shapes and forms to make each person feel unique. Each character, from the clothes they wear to their expressions, help bring them to life and add personality. This is especially true for characters we haven’t gotten to know yet – there’s no question that the C.R.A.D.L.E. agents are bad news with their bulky designs and hairstyles that range from half-shaven to fully-shaven.

We only get a brief action scene near the end of the issue, but the artwork remains effective there as well. There’s a good flow to the action, and Minkyu’s illustrations make the Ghul they’re fighting look sufficiently otherworldly and demonic, while still including the proper cultural influences. Each hit or miss is given the right amount of impact to let you feel whether an attack is properly connecting or ineffective, and the use of Ms. Marvel’s stretching powers makes for a great fight illustration.

The colors are a little on the earthen, muted side. Not enough to dull the comic, but enough to make it feel more down-to-earth and less fantastic than some of the wilder comics in the Marvel universe. This actually helps, as it makes the characters feel more human and not quit as larger than life. There’s more in the way of bold, strong colors when Ms. Marvel and Amulet team up, especially with Amulet’s blue glow and the red of the Ghul they fight; the colors make a nice contrast there.

All in all, “The Magnificent Ms. Marvel” #16 is a good issue that manages to blend core story elements for the comic, “Outlawed” event, and characters nicely. It keeps things moving at a good pace, helps us feel for the characters, and adds in some fun action to the mix. It’s everything you can hope for in a “Ms. Marvel” comic.

Final Verdict: 7.5 – A good issue of a solid “Ms. Marvel” comic, which uses the “Outlawed” storyline to its advantage rather than let it derail the plot.