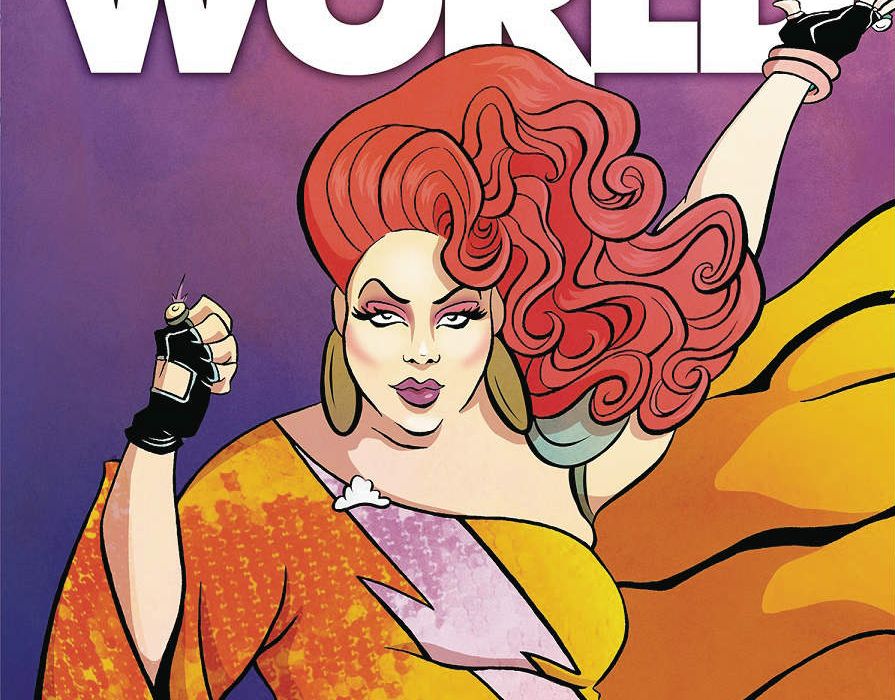 Bestowed with great power provided by a pantheon of legendary queer figures, Mama Tits fights all forms of bigotry and hatred across history. Brought to life by Charles Christensen and Terry Blas, “Mama Tits Saves the World” is a loud and uproarious call to action. 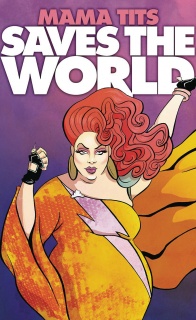 I was with my boyfriend at the midnight release Harry Potter and the Cursed Child when I ran into another friend. He wanted to try out other play scripts and asked me if I had any recommendations, so I threw him a copy of Angels in America. Naturally he wanted to know what it was all about, but as soon I started talking about the AIDs epidemic, where gay people were literally dropping dead by the thousands while the President of the United States openly laughed, his eyes glazed over and his interest waned. I don’t think he ever picked up the book.

The biggest reason I bring this up is because “Mama Tits Saves the World”, written by Northwest Press publisher Charles Christensen and illustrated by Terry Blas, fully acknowledges the progress we queer people have made in such a short amount of time, but it doesn’t want us to forget our history. It wants us to celebrate recent achievements like marriage equality, kids feeling more comfortable with coming out, and the increasing amount of acceptance we’re seeing overall, but we can’t forget those who fought to have that won.

“Mama Tits Saves the World,” therefore isn’t so much a story as an extended public service announcement. Christensen and Blas provide a rouges gallery of thinly disguised bigots for Mama Tits to take down. They all have an over-the-top gimmick they want to use for repressing people different than them, but it’s terrifyingly not far off the mark of how they really act and behave. And as Mama Tits goes around thwarting their evil plans, she reflects on how these people are dealing with their own insecurities, prejudices, and shortcomings. “Your fashion sense is as bleak as your outlook on the world,” she says to a stand-in for a certain Kentucky county clerk.

This is all fun and empowering, but the narrative itself runs thin. It’s so anxious to get from bigot to bigot, throwing out reference after allusions, that we never get any real drama or conflict. It’s about as subtle as a parading pink elephant at Circus Circus. The stakes are so big, they’re almost abstractions. This makes it harder to see “Mama Tits Saves the World” as little more than a Big Idea, a Chapter Header, rather than a specific detail. History’s acknowledged, but it’s also sort of glossed over.

For his part, however, Terry Blas brings a burst of life to the material. His Mama Tits is big and boisterous and the exact type of person you’d be willing to follow into a fight. He approaches the material with a clear line and bold sense of staging. He uses the mainstream superhero-esque widescreen panel layouts, but under his pen it’s a lot more fun and frisky. While his Mama Tits is certainly divine, I found myself digging his background characters, the people filling out the peripherals. Blas takes the time to include a variety of body types, genders, and ethnicities, so even if the background sets are never entirely filled out, the world of the comic appears whole and complete. Honestly, his work on “Mama Tits Saves the World” has a sort of Kagan McLeod look to it, which I wasn’t expecting after reading some of his webcomics. It’s an overall enjoyable book to look at, never mind how fun it is seeing her blast a certain conversion therapy doctor with a pride rainbow burst of energy.

In order to pad the page count, “Mama Tits Saves the World” also includes pinups and activity pages from Sonya Saturday, Diego Gómez, and Justin Hall. While these are fun and all, I wish some of this could have been devoted to the main story instead. Especially because Northwest retails the print edition of this book at $5. Like, maybe Christensen and Blas might have been able to develop more of the story, to make it more of a story, if they had the room to do so.

Throughout the comic, Christensen and Blas hit home that the fight against bigotry is all our fight and yes, it’s empowering. “Mama Tits Saves the World” tells us that it gets better, that it’s getting better, but it also reminds us not to neglect our history. When people get complacent, overly comfortable with the strides they made, when their eyes glaze over at the mention of the AIDs epidemic or Stonewall or something, this leaves an opportunity for wicked and evil people to make themselves known. It’s a loud proclamation, though not much of a strong narration.