As the weekly series by Bendis and some of comics best artists reaches its second half, it becomes absolutely clear that the writer has an unique and true voice for Superman and that the artist choice for each issue is more than a “who’s who” on DC’s roster. 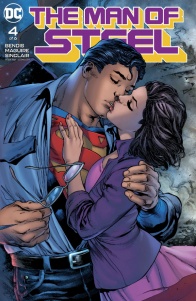 Rogol Zaar has committed a string of atrocities across the cosmos that have led him to the Fortress of Solitude-and now Superman and Supergirl plan to crush his schemes! But are even two Kryptonians enough to stop his sinister machinations?

“Man of Steel” #4 is another good issue on this weekly event, largely because Superman is not only being portrayed as a strong, powerful hero but, above all else, an honorable and sympathetic man. More often that not, writers of the Big Blue tend to lean too much on either of these aspects, leaving readers with an all-powerful deity, but detached from humanity, or a traumatic human being, carrying the weight of the world on his shoulders. On “Man of Steel” that balance is in full force, so the audience can’t help but cheer for Superman and fear for his well-being and of those around him.

Having reached issue #4, with art by Reis, Shaner, and Sook on previous entries, it is time for Kevin Maguire to lend his particular skills to “Man of Steel” 4. At this point, it becomes clear the choice of each artist for each chapter of the story (Reis in big action, Shaner on villains prone to the cartoony), so now the focus is firmly rooted on character pieces and conversations.

Maguire is well-known for his knack to deliver some of superhero comics’ best facial expressions and these pages offer a lot of room for him to flex those muscles. There are moments around Supergirl and Green Lantern that are great examples of that, when there is little need for dialogue or narration boxes to explain feelings and emotions. Even with supporting characters or even on background, that talent is spot on: note how a bystander to Rogol’s violence is terrified as she falls to her death, or even how the population of Metropolis looks up in awe as the explosive action unravels above them.

Talking about action, Maguire is no slouch there either. “Man of Steel” #4 finally offers a confrontation between Rogol Zaar and Superman, as both titans battle around the city’s skyscrapers. It is interesting to see how Superman avoids violence and destruction even against a foe who has given him so much reason for hate, and the art shows that. How he holds his punches, deflects debris and adjusts his course of action to save the innocent. It is a valuable touch to further frame character traits.

Sinclair also adds a lot on colors, especially on the aerial battles and in one particular moment when the energy build-up of Superman’s and Rogol’s powers destroy multiple windows on Metropolis’s buildings. It is quite a different effect being used, on what seems to be individual coloring on every shard of broken glass: truly a panel to pause at.

Beyond the art, however, “Man of Steel” #4 shines the most under Bendis’s pen. There is a lot to enjoy, both to old and news fans. First of all, it is obvious that Bendis wants to use this series, and hopefully his runs on “Action Comics” and “Superman,” to show how his lead character connects with the rest of the DCU. His exchanges with Green Lantern and Supergirl, Perry, Jimmy, and the rest of the Daily Planet cast, they all get how Superman would behave and how other characters react when he is around.

The same feeling of ringing true can be observed around Rogol Zaar. While there is a lot to be learned about him, and to truly set aside concerns of a generic alien villain, “Man of Steel” already presented a more well-rounded nemesis, with valid motivations and a hatred that contrasts with Superman’s hope. The dialogue between hero and villain has some deep and surprising  moments that propel the plot forward.

Not all is perfect, though. As the middle of the second act on this story, the plot seems to lose its way on occasion in favor of big action. It is not particularly bad, especially considering how beautiful the art is, but it is the slower issue of “Man of Steel” so far, despite the big moments and explosions. Also, the reveals around Jon’s and Lois’s whereabouts (the segments with Jason’s Fabok art) are too much of a slow burn, with a feeling of “previously, on this show” pervading the narrative.

“Man of Steel” #4 continues to offer a deep, meaningful understanding of what makes Superman tick, with excellent art on every issue, including the landmark facial expressions of Kevin Maguire on this entry.

Final Verdict : 7.7 – Bendis and the entire creative team continue to build on their foundation for this new era of Superman, by focusing on insightful character moments, exciting action and beautiful art.