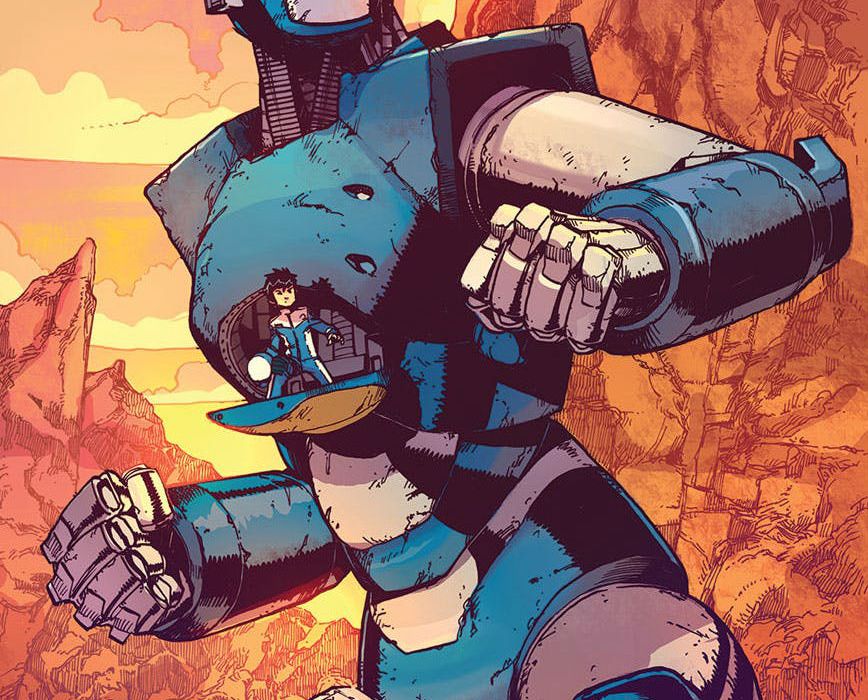 “Mech Cadet Yu” #6 narrates how Yu and the other cadets try to escape a horde of baby Shargs from their own base in an issue that is a light, fast-paced story with a strong focus on action. But is that a good thing, meaning a fun read with compelling art, or does it translate into a weaker-link of an issue, with limited character moments and a slow-burn in terms of plot evolution? 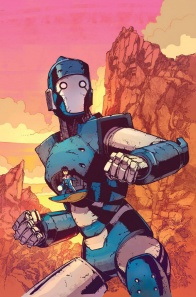 The cadets come face to face with the Sharg, but without their mechs, will they be able to work together?

Greg Pak is a writer famous for his intense action sequences, interesting set pieces, and world-building, with some truly outstanding work when that feeling of urgent, required action is intertwined with strong protagonists and character moments. For the most part of “Mech Cadet Yu”, the series has delivered just on that, as readers started to learn and care about the cadets as they mingle with each other and learn to deal with the extraordinary events around them. However, on this particular issue, that equal focus on character development and interaction is lost. Despite the neck-breaking pace Pak puts his characters through, as they must escape the Sharg infestation without the support of their Mechs, there is very little to be seen here besides the action. This issues reads like an extended escape scene with little sense of purpose beyond moving characters from point A to point B.

The story relies on two dilemmas to be effective: first, readers need to question the cadets’ abilities to work together, to find alternatives to defeat the Sharg without the support of their Mechs. Second, they must be concerned for their survival, in case their fighting skills fall short. However, neither of these plot points fully deliver. There is really no basis to think the cadets won’t prevail together and their success to defeat the Sharg with broken brooms as makeshift spears further brings that fact home. From that point on, any sense of a life-or-death crisis is robbed, to the point that a potentially interesting rescue later on the issue has very little impact. The advent of some of the adult characters feel equally unnecessary, as if the script had to bring all of them conveniently together for the issue to culminate where it was supposed to. Ultimately, readers are left wanting stronger, more complex characters and a truly challenging scenario where they could shown their abilities, camaraderie, and personalities.

On the other hand, Miyazawa’s pencils are very competent and are the main selling point for “Mech Cadet Yu” #6. The artist does his best to work with what the script allows him to but there is so much creativity that can be imprinted to a series of corridors and running sequences. But succeed he does: his Shargs are scary monsters that advance like a hive but that are equally able to attack individually with unique styles. The multiple confrontations feel real and immediate, with very good work being put into movement lines, adding a kinetic energy to each battle. His facial expressions are just as effective, finding multiple alternatives to convey fear and desperation, but also to express the eerie kindness on Buddy (Yu’s Mech) metal exterior. The moments where one cadet reaches out for the safety of his or her friends are some of the most emotional of the issue and that credit should go to Miyazawa for conveying it so effectively on body and facial language alone. The choice to load most pages with a high panel count also adds to the sense of confinement and claustrophobia, forcing readers to go through he same ordeals Yu and his friends are going through.

Farrell’s colors are a great component of the art as a whole. The blood spurts shed by the Shargs as they are defeated work particularly well, providing a sense of disgust very fitting to what these characters are going through. The same dedication can be seen on how corridors are lit, on the light reflecting on the cadet’s faces and on the burners that shine as the Mechs rush to the rescue. Of special note, some panels are stylized to be colored completely in one tone, to allow the more intense action sequences to take center stage. Those moments almost feel like animation cells and are some of the best “Mech Cadet Yu” #6 has to offer.

As the issue progresses to its largely predictable outcome, there are some events and decisions that do surprise, and one wonders if this wouldn’t have been a stronger offering if more of the story focused on these aspects, rather than the dragged on escape plan. Alternatively, if readers were caring more about these characters, that sense of dread and fear would have had a stronger payout, but since Pak does little to give each of them a voice and motivation, their ultimate success feels unearned.

Final Verdict: 4.9 – For a series as compelling and fresh as “Mech Cadet Yu” issue #6 is ultimately more about the noise. What could have been exciting sequences within the confines a more rounded entry, unfortunately ends up being too much ado about nothing, lacking on strong characters moments and believable danger. This is largely where the issue fails, despite a visually-grabbing art style and coloring that do their best to imbue interesting features.