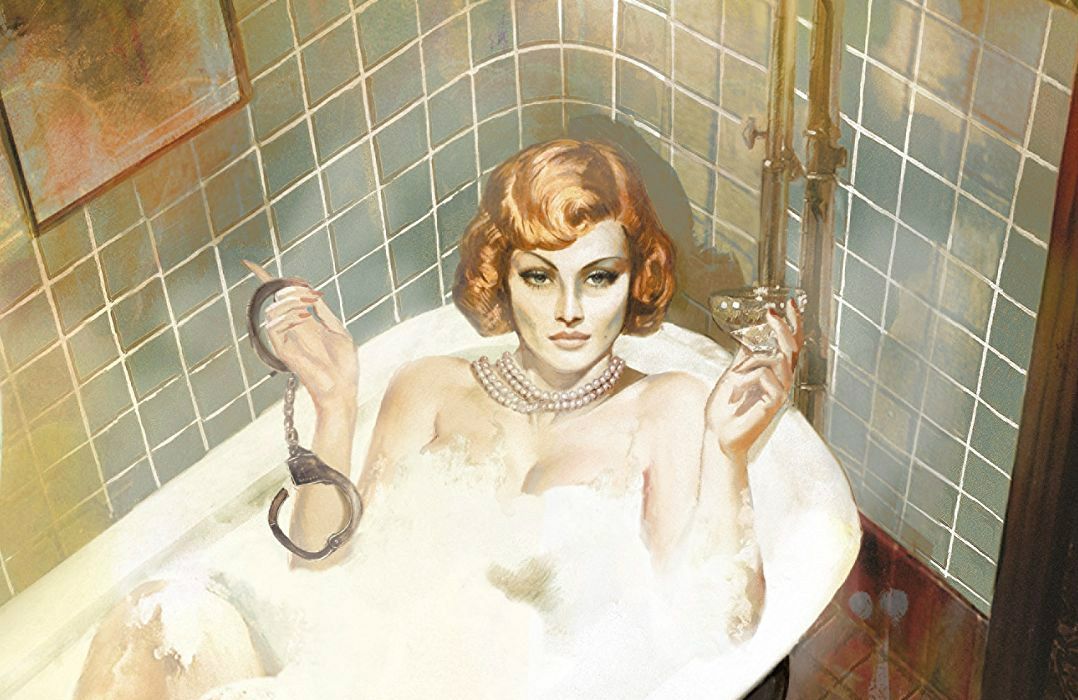 Oh Minky, what have you gotten yourself into? Spending time with Harry Houdini’s isn’t going to be any standard-issue job. The follow-up to the newest series from Hard Case Crime, based on the circumstances and unanswered questions behind Harry Houdini’s death, makes for a compelling story.

(Please note that this is an adults only series with graphic sexuality throughout.) 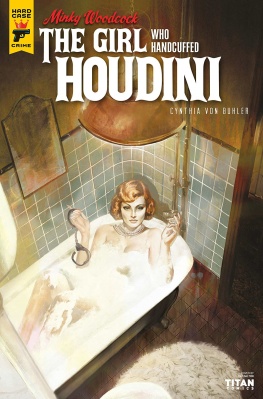 Minky’s successfully infiltrated Harry Houdini’s life. When they’re not performing for sold-out audiences, they’re lecturing on college campuses about the myth that is spiritualism, and taking their relationship past the professional to the personal. Minky’s also become a bit of a star in her own right, substituting for the injured Harry for a few stunts. But this newfound fame doesn’t derail our girl detective from finding out the truth . . . an investigation that gets derailed very quickly when practice for a new stunt for the show puts her in a very precarious — and dangerous — position.

Harry Houdini’s death on October 31, 1926 still remains shrouded in mystery over 90 years later. While he officially died of peritonitis caused by a ruptured appendix, the circumstances that led to said appendix still remain unclear. Did a student at McGill University deliver a fatal blow, possibly in the midst of a test of strength? Was it something else that was covered up? There’s plenty of evidence to suggest multiple threads of investigation, making Houdini a fascinating subject for a comic. Writer and artist Cynthia von Buhler has certainly done her homework on her subject; there’s an entire section of the Minky Woodcock webpage devoted to her research that presents a fascinating case for this (fictional) story. If you’re taking the time to read this series, it’s certainly well worth your time to visit that webpage to see this primary source material.

And what a story it is! After a debut issue that serves as an introduction to Minky and her family, we get a second issue that dives headfirst into our main story, climaxing in a handcuffing stunt gone wrong that leaves Harry Houdini very much dead at the hands of Ms. Woodcock. With a series that is only solicited to four issues, we can’t waste time on any more exposition (and truthfully, I was hoping for a little less exposition in that debut issue, especially with the short run), so I’m pleased that we’re off and running. There’s more that is teased here that I would hope is explored in the last two issues, such as the mystery condition affecting Mrs. Houdini, and the identity of the nurse traveling with the troupe. The background research that von Buhler provides will be a nice substitute if we don’t see it in the comic pages.

Minky herself also proves to be an interesting character, a woman raised in a man’s world (her mother passed away when Minky was very young) but constrained by the roles of women of the day (she’s left to play secretary at her father’s detective agency). I’d love to see her come back in her own mystery series, perhaps solving murders and thefts alongside some of the greats she’s name-dropped (Agatha Christie, Sir Arthur Conan Doyle).  Of course, there are two issues to go and her mystery-solving prowess is yet to be seen, getting yourself a job with the target of your investigation does not a detective make. With the backstory that we have already, whatever future Minky has in comics would certainly not be boring.

Ms. von Buhler not only writes her story, but illustrates it as well, and shows great care for both art and prose. She treats her female characters with respect in illustrating their bodies; no overly sexualized figures here. It’s too easy to make a magician’s assistant eye candy and nothing more, but that’s not our Minky. There’s sex in pen and inks when it’s needed, such as the medium who conducts her seances in the nude. The choice of a more flat, two-dimensional drawing style is perfect for the time period; you almost feel like you are reading a Gold or Silver Age book, not one published in 2017. While the women are quite period accurate in their depictions of fashion (finger waves, cloche hats, flapper dresses, and bobbed hair galore!), the men come across as rather nondescript. Is that intentional, a way to put women at the front and center of a story in an era when they were best to be seen and not heard? Perhaps. Take the time as well to look at entire pages closely. There’s detailed artwork underneath main narrative panels, not so detailed that they distract from the primary narrative, but enhance it. If there is any one drawback to this book, it is with panel layout. Some pages feature a little too much action in one page, and it can be distracting to the eye. Lettering and word bubbles are not often proportional to the panel size, masking Ms. von Buhler’s great artwork that deserves to be seen in all its glory.

This series combines two of my favorite things in pop culture: period pieces and strong women. We’re at the climax of this story and with only two issues left, I’m quite keen to see how Minky is going to work her way out of this predicament.

Final Verdict: 7.8 — Well-done writing and art but could use a little bit better lettering and layout so that they work more in tandem.