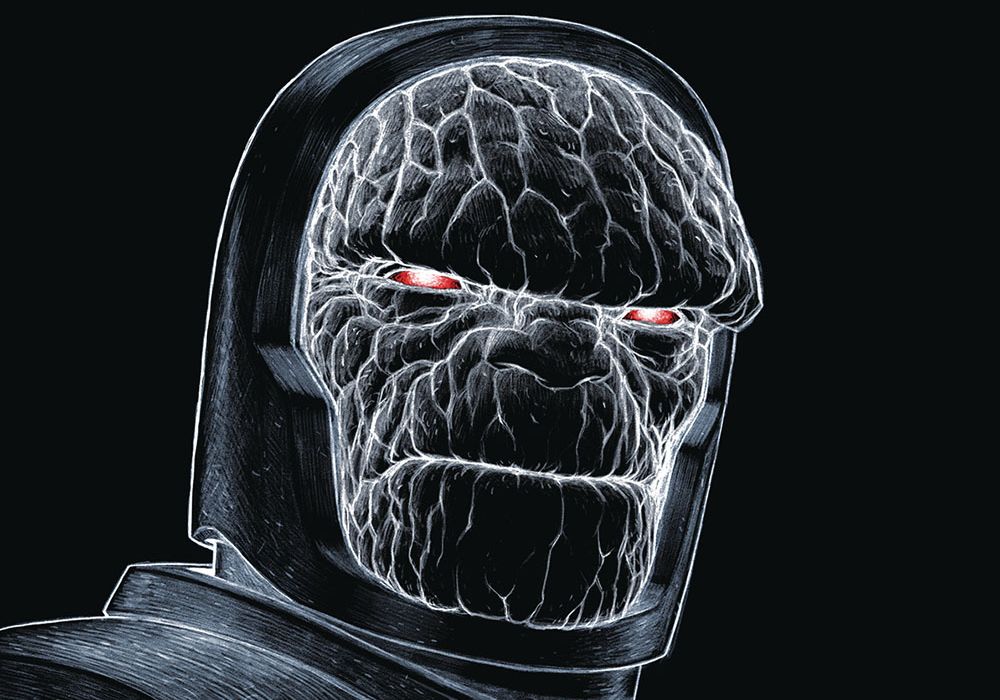 Arriving on shelves like a comic book version of an inky black singularity, “Mister Miracle” #10 features a cover by Nick Derington that finally depicts the evil lord of Apokolips in all his menacing glory. The image is inverted, like a photographic negative—an anti-image for the keeper of the anti-life equation. Inside, Tom King subverts the expectations created by this dramatic cover by delivering a more emotional drama of another sort.

Darkseid has put an offer on the table- something that can end the war between New Genesis and Apokolips once and for all. The stakes are high, but peace is important. Mister Miracle finds himself caught having to make a decision that won’t just change the new life he’s been building, but potentially the entirety of the universe.

Like Paul Levitz’s The Great Darkness Saga, King has withheld Darkseid’s physical presence from the pages of his series (save for a single panel in issue #6 and four shadowy panels in issue #9), opting instead to return to Darkseid’s roots as a malevolent orchestrator of doom. Many modern interpretations of the character have chosen to depict Darkseid as a galactic grappler, trading body blows and bolts of energy with the strongest of the DC Universe. But like the dorsal fin of a great white shark, the “Darkseid is” panels that have peppered the series to date have cast the villain in shadows and dreadful mystery in favor of showing how others, particularly the title hero and his nuclear family, react to his machinations.

Issue 10 picks up in the wake of the armistice bombshell delivered in issue 9. Scott Free must decide if he will sacrifice his young son in favor of achieving cosmic peace between Apokolips and New Genesis. It’s a war that Scott knows that New Genesis and the forces of light are destined to lose if it is allowed to go on, and Scott, the reluctant Highfather of New Genesis, must decide what to do… while planning a first birthday party for his young son, Jacob. Returning to a technique that King has employed throughout the series, the Eisner-winning team of King and Mitch Gerads depict emotional turmoil that bubbles under the surface of the banality of modern married life. Scott goes out drinking with his old Justice League International buddies, and his visit to the party supply store finds him spilling his guts to an unwitting but nevertheless very opinionated store clerk. Readers will get the sense that King is planting clues in these trivial episodes to how the series finale will play out, but the most important thing is to see how even a god can take solace from the horrible realities of cosmic war in acts of domestic mundanity.

At the emotional heart of the book is Scott and Barda’s young son. In particular, there is a scene with Funky Flashman where he recounts to Scott a story that he and Jacob have created together about a giant being called Stareater who is thwarted from eating Earth’s sun by a boy and the giant being’s herald, The Golden Retriever. That’s right. Instead of The Silver Surfer, it’s The Golden Retriever. It’s clearly more than just a clever nod to Kirby’s history with Funky Flashman’s analog, Stan Lee. There’s something germane to the final two issues in these pages that Scott does not quite understand about the significance of his son. In fact, he misses Funky’s elliptical point entirely. As a reader, I don’t yet understand its significance either, and that thrills me. On these pages, Gerads gives way to artwork by King himself, mimicking childlike sequential storytelling in a way that I thought was only possible when executed by an actual child. I hope that comes across as praise.

Back to Gerads, what else can be said about the way he and King use the limiting nine-panel grid format to their limitless advantage? The format has allowed Gerads and King to create crystalline, self-contained vignettes within an issue in a series that has itself been comprised of largely self-contained issues that are nonetheless building to something that could potentially be cataclysmic for the cosmos but more importantly cataclysmic for Scott and Barda. And as the seeds for that cataclysm try to germinate, Scott’s Highfather-worthy beard continues to grow. Meanwhile, he tries to get his kid to bed (the master escape artist can’t escape his son’s nursery without waking him), and he finds comfort in the domestic simplicity of resting his head in his wife’s lap (talking through things like regicide as casually as one might discuss an oil change). And I adore the way that Gerads renders Barda. She’s not classically proportioned or depicted like a giant supermodel. She is a massive presence and a physical force even as she sits on her couch mindlessly checking her Mother Box. The indestructible Barda even gets to deliver the issue’s most resonant line, reminding Scott that she has never had any other choice than to stand and fight for what she loves. For her, there is no escape and no life worth living without her love.

Like Jack Kirby’s Mother Boxes, King and Gerads have pinged all the right notes in this series, filling their panels with tiny bits of fan service and homages to Kirby’s original creations while building to a finale with emotional stakes just as high as physical ones. As the series stands on the precipice of its penultimate issue, there is a feeling that King and Gerads might have crafted their own slight of hand trick, one for which you don’t even want to guess the ending. King has stated that their series is a response to the anxiety induced by the modern world. Maybe for Scott Free, the master escape artist, the way out is to realize that there is no way out. It’s an escape only the mind can grant.

Final Verdict: 9.0 – King and Gerads continue to find new ways to recontextualize superhero comics, and “Mister Miracle” #10’s finale will leave fans of this series anticipating the final two issues with as much excitement as dread.