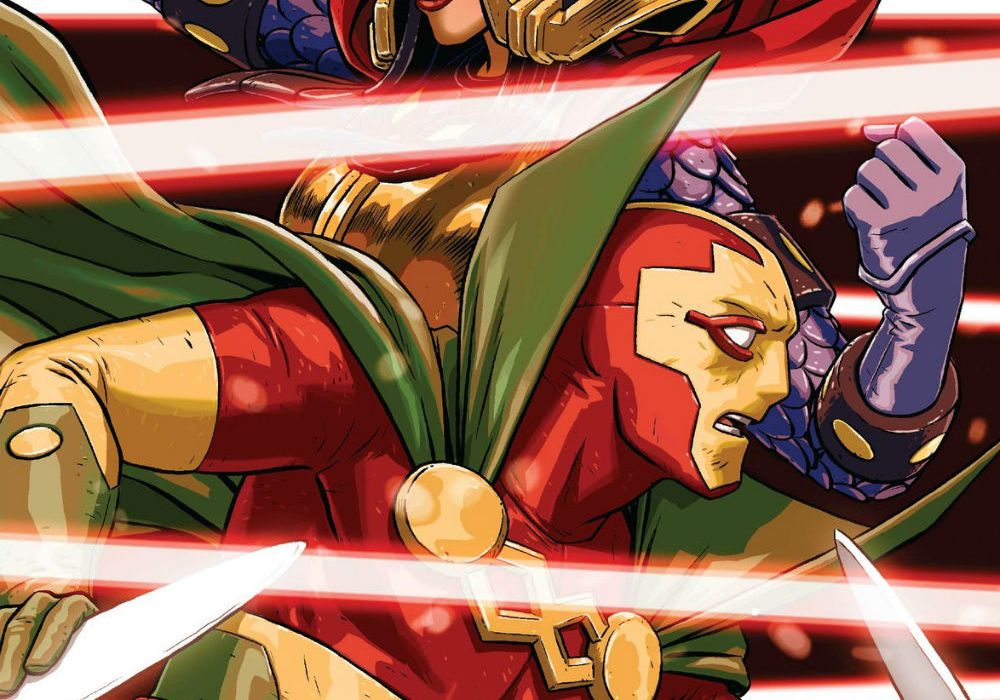 “Mister Miracle” has been consistently one of the best books on the stands for its five first issues. The mature take on Scott Free and Barda, combined with a traditional nine-grid panelling yet experimental storytelling, has been a successful formula for Tom King and Mitch Gerads. So does issue 6 continue that trend? Yes, absolutely yes. 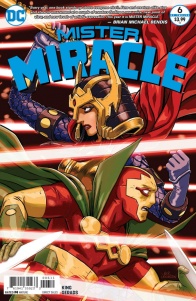 The hit miniseries reaches the emotional conclusion of its first arc! Scott Free returns to New Genesis to face his punishment, but instead finds the whole world has been flipped upside down. Mister Miracle and Big Barda battle their way through monsters and New Gods to get to the Highfather, but once they reach Orion’s throne room, they learn that the war against Darkseid has taken a bloody turn.

What has been the cornerstone of this series since the start, the perfect blend of King’s script and Gerad’s art and colors, remains the basis of quality for this issue. Having said that, the creative team continues to push to find new ways to drive readers in. This time around, this is done primarily in three ways: first, how Scott and Barda’s dialogue has little to do with the action going on. Second, how page layouts pull the readers to join the frame, in a similar way the main characters do. Third, in the way that the art guides eye movement through a densely packed issue. Let’s talk about them individually.

From its opening page, King is quick to establish what is more present on the minds of Barda and Scott are the changes happening in their personal lives, represented here by a desire to redo their condo, rather than the immediate battles waiting for them. These are larger-than-life heroes who know their opposition is no match for them. More importantly, as a narrative choice, this allows King to effectively deliver two stories for the price of one, which end up converging at the end for a very powerful climax. Mind you, this is not the same effect as observed in books like “Watchmen,” where the dialogue mirrors elements of the action and art, but truly something set in contrast of it. The effect is a story filled with details, both in the nuances of this conversation and the art that is left free to deliver all the necessary exposition for the main plot to move forward.

Gerards utilizes a framing device on issue 6 that is not seen all that often. On its early pages, Scott and Barda join the story from outside the framed action, as if they are leaving the reader’s world and ‘jumping in’ the page from the proverbial fourth wall. This is particularly noticeable on pages two and three, where the layout starts with a pre-established element (guards on patrol or a wall blocking the way) to then seeing their reaction to Mister Miracle’s arrival and only then to properly show Scott and Barda. That inverted order of impacted subject, then action, then main actor suits the mood of an escapee artist greatly. Even more remarkable is how Gerads breaks his own mold, by inserting sequences in the middle of the issues that completely shift pace as panels start to reflect a broader reality on the page to later revert to the style established on the issue’s opening. It truly is great work that almost teaches readers on how they should follow the story. And talking about following…

For such a dense issue, it would be easy to pack it with so many details t it leaves the visual narrative hard to follow. Not so here. Gerads is very effective on guiding the reader’s eyes, with the action in one panel leading unto the next effortlessly. There is a particular sequence where Barda is tossing a guard around, where light beams connect with helmets, which connect to movement lines. It almost feels like a ballet. One looking quickly at the page could almost observe the illusion of moving animation, rather than static drawings.

But is it all great? The issue does have some problems, less about itself and more about its place on the greater arc. As the capstone of the first half of the series, it really is hermetic for new readers to understand all that is going on – from Orion’s plans, to the couple’s relationship, to Scott’s internal struggle. And while the reveals and twists at issue’s end are compelling, they really need that larger context to be fully understood. It is not jarring for this issue, but still worth noting: those wanting to join “Mister Miracle” now would really benefit from reading the entire series from the start.

The trust and respect that script and art have for one another is present on every page and it is obvious that the creators have tremendous chemistry. While the story at this point makes it harder to welcome new readers, this is certainly a book and series recommended for any superhero fan.

Final Verdict: 7.9 – “Mister Miracle” #6 is another great building block to what will surely be a Tom King and Mitch Gerads phenomenal series.