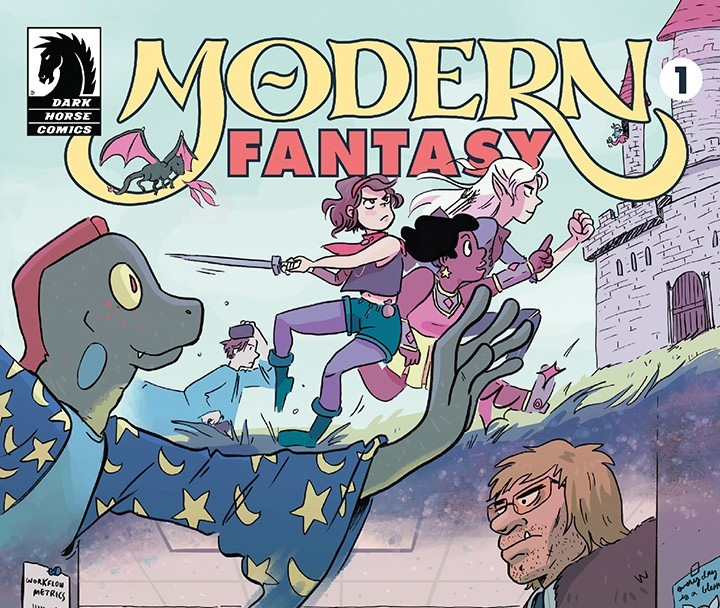 A young Ranger woman who came to the city with dreams of adventure, her drug-dealing reptilian wizard roommate, and her boisterous Dwarf maiden BFF embark on a modern-day quest to save the world while struggling to keep their crappy day jobs and pay off their student loans. The roommates become embroiled in danger when one of their significant others finds himself taken by criminals, and the trio must save him.

On the very first page of “Modern Fantasy” #1, writer Rafer Roberts and illustrator Kristen Gudsnuk deftly set the tone for the series. Roberts pithily describes the first setting as, “The City of God’s Helm. Warehouse district.” Visually, a contemporary Brooklyn-esque street scene in the foreground frames a distant floating city that hovers magically in the sky. In the following panels we see a couple of ogres and an owl-like creature menacing a pointy eared man in a typical office space. Via CCTV, we are also introduced to Lizard Wizard (who fits his moniker to a T) and his goblin boyfriend Fentax. We’re barely one page into the debut issue and we can already imagine a world where smug hipster tap rooms serve handcrafted beer, artisanal charcuterie and farm-to-table seasonal veggies to characters straight out of Dungeons & Dragons when they finish working their corporate jobs for the day.

Sure enough, a few pages later we meet Sage of the Riverlands, a young looking human female who works a mind-numbing office job with a literal barbarian for a boss. Somewhat predictably, Sage is sick of her daily routine and longs for adventure, dreaming of a life beyond her dull gray cubicle walls. Not coincidentally, she also happens to be Lizard Wizard’s roommate. Unbeknownst to the two of them, as well as their third roommate Gondra, Fentax’s penchant for swiping other people’s stuff is about to get them all in a boatload of trouble and this time around the pilfered product isn’t merely a collection of Jethro Tull albums.

Certainly, some of the verbal and visual gags can be charitably described as low hanging fruit. The characters’ handheld devices, for example, sport the brand name iScroll. Thankfully, other jokes are a bit more cheeky and clever. Two characters in the breakroom discuss a couple of their favorite TV shows, “Keeping up with the Kobolds” and “Growing up Goblin.” Later, a street sign reads, “Curb Your Hell Hound” and a corner store is called “Deli of the Beast.” There are puns, wordplay and site gags on virtually every page, ensuring that if one joke falls flat, another will quickly take its place, hopefully prompting a smile if not a hearty chuckle.

Visually, Kristen Gudsnuk’s style plays with common fantasy tropes like pointy ears and pointy noses while also infusing an edginess not always common to the form. At first glance, characters like Bock-Darr (the barbarian) and Darquin (an elf) definitely look the part, but after a moment it’s clear that there’s also a layer of subtle commentary. Bock-Darr has a big nose, protruding tooth and massive shoulders, but he also wears suspenders and a tie while sipping coffee out of a skull shaped mug. Darquin’s long flowing hair is quintessentially silken, but the knees of his jeans are torn and he affects an emo posture.

In many ways, Gudsnuk’s inks have an indie feel. Her lines are bold but loose, spontaneous and imprecise, as though anything could happen next. Her characters may be stuck in a rut, but the inks feel lively and energetic. Congruent with Roberts’s script, Gudsnuk wisely avoids even a hint of the overly reverential, stilted formality that tends to bog down certain works inspired by high fantasy.

Granted, some of the panels and pages are definitely crowded in this text-heavy debut, but the story moves along briskly so the trade off seems well worth it. Gudsnuk’s color palette is solid, nicely striking the balance between somewhat bright and fantastical (lime green, bright pink, purple) and more traditionally earthy (beige, taupe, brown, burnt orange) . Ultimately, however, it all feels a bit uninspired and doesn’t necessarily add much to the story. That said, there’s a refreshing range of skin tones which definitely makes the story feel more contemporary and vital. In terms of character types, this is the kind of diverse, instantly relatable fantasy world that should be the default.

In the end, Roberts and Gudsnuk take a somewhat familiar idea – the fusion or hybridization of high fantasy tropes with contemporary “real life” themes, elements and settings – and give it their own spin. They don’t necessarily break a whole lot of new ground, but the characters are compelling, the dialogue is witty and the plot is well constructed. In short, it’s a well made debut that will keep you turning pages and wanting to see what happens. Things are just getting started.

Final Verdict: 7.3 – Keep an eye on this series. Writer Rafer Roberts and illustrator Kristen Gudsnuk have delivered an intriguing debut that puts a refreshing spin on the fantasy-real world mashup.