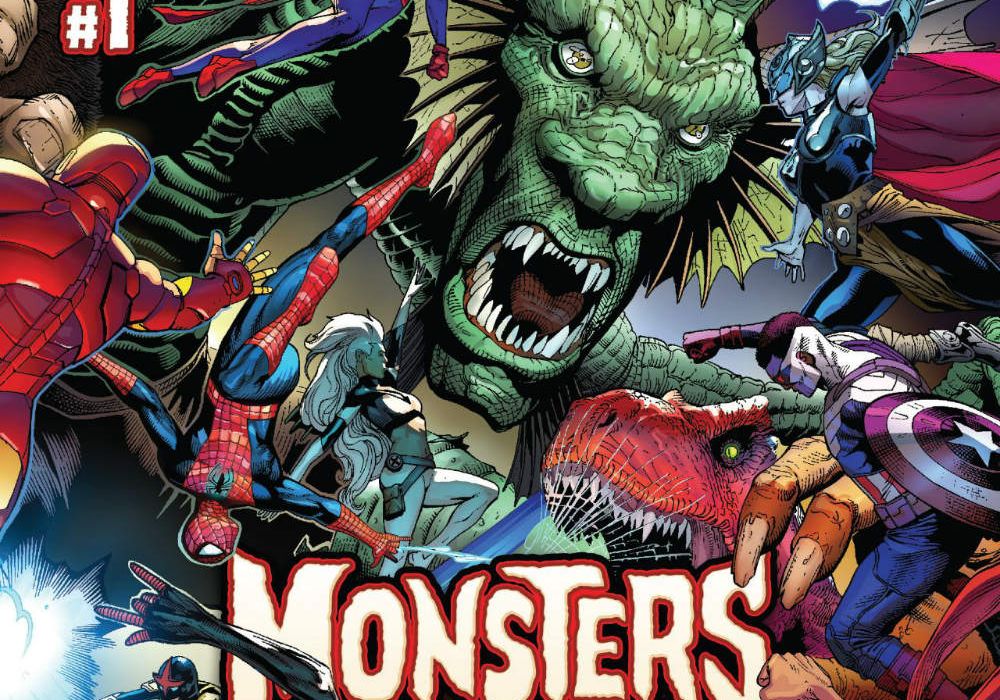 My first thought upon hearing about “Monsters Unleashed” was a slightly amused “Huh, this could be interesting.” But then I remembered what this means: every hero team fighting monsters together is the perfect breather after multiple consecutive events where heroes fight each other. That’s all the motivation I needed to get excited for this, so let’s take a look and see if it’s as entertaining as I’d hoped. 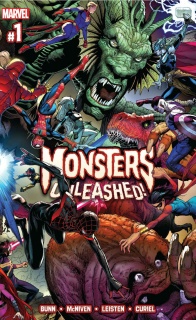 The epic battle Marvel fans have been waiting for, drawn by today’s greatest artists!!! It’s all hands on deck with the Avengers, Champions, Guardians, X-Men, and the Inhumans as they clash with monstrous threats that threaten to destroy every corner of the Marvel Universe. Who are the Leviathons? Who controls them? How can they be stopped before Earth becomes another tragic, barren world in their wake? Written by powerhouse writer Cullen Bunn and drawn by Marvel legend Steve McNiven, this issue is the beginning of something big that you just can’t miss!

What is there that can really be said about “Monsters Unleashed” that the title doesn’t already make clear? There are monsters. They are unleashed upon the world. Now the various superhero teams get to fight them, and we, the readers, get to enjoy the wonderful artwork that ensues.

A good portion of the comic consists of dual-page spreads, with monsters arising and heroes striking out to fight them. Each team gets at least one spread, with the Avengers and Champions getting a few more pages than the rest. And every single panel is awesome.

I love the different monster designs, which range from typical monster movie-style creatures to eldritch horrors to creatures inspired by mythology. Each one looks just as monstrous as one would hope, and each is clearly making the teams they fight work hard to overcome them. There’s also a particularly amusing moment where the Champions bicker over whether or not the creature they’re fighting could be classified as a “kaiju.” (For the record, I would say yes, and counter Nova’s argument of “this thing landed on American soil” with “There’s an American Kaiju now, he fought the New Avengers.”)

Of course, as fun as it is to watch super teams go toe-to-toe with giant monsters, we still need a story. So the issue may look great, and is packed full of plenty of high-octane action, but does it have anything in the way of narrative progression?

Well, it’s starting to. There’s definitely a story forming, but much of it is being saved for later issues, since this first issue serves to set up the conflict (ie. “giant monsters are appearing out of nowhere and attacking everyone”) and begin looking into the questions we’re hoping to see answered.

To do that, it gives us three separate characters who aren’t currently fighting giant monsters – well, technically four: Moon Girl and Devil Dinosaur, Elsa Bloodstone, and Kei Kawade. Each helps advance the plot in one way or another, and it seems all will connect sooner or later.

Moon Girl and Devil Dinosaur have until recently had more of a tangential connection to the other events in the Marvel universe, but it seems that this coming will be giving them more of a center role. Moon Girl is searching for a scientific solution (or at least Moon Girl is, while Devil Dinosaur would prefer for a more “kill and eat” sort of solution), and while her appearance in this issue is brief, her search for a modern solution parallels nicely with Elsa’s search for answers in ancient documents.

Now, my first introduction to Elsa Bloodstone was through “Nextwave,” which is a comic I would recommend to absolutely everyone. To me, she’ll always be the coat-wearing badass who opted to fight an army of robot samurai with a shovel, because a shotgun would be useless against swords. And to be fair, every subsequent appearance has done very little to dissuade me of that impression.

We get our dear Ms. Bloodstone marching into ancient ruins, casually leaping over traps without even pausing her internal narration, and seeking some ancient secrets that will undoubtedly be important down the line. Once again, the artwork is top notch, whether she’s diving neatly between multiple chainsaw blades or in a dark cave examining carvings on the walls. This is absolutely one of the best looking comics I’ve read all week, both in scale and detail.

Last but not least, Kei Kawade, aka “Kid Kaiju,” who first appeared in “Totally Awesome Hulk” in 2016. His appearance in that comic showed his ability to summon monsters via his drawings, although he can’t control them. It’s no secret or surprise that he’s connected to the monster appearances, at least not to anyone who looked into the comic before picking up the first issue, but how far his powers go and what their limits are has yet to be revealed. He does certainly look older than he’s supposed to be, though; he doesn’t look at all like an 11 year-old, which I suppose marks the only issue I can bring up with the art.

At any rate, just seeing the monster appearances run parallel with his sketching makes it clear that they’re connected to the drawings somehow. But the extent of his power, and what he’s doing by drawing all these monsters into existence, that’s a question to be answered in later issues.

Until then, though, we can still get plenty of mileage out of seeing our favorite heroes fight monsters. At the very least, it’s a good fun breather from seeing them fight each other.

Final Verdict: 8.2 – Light on story, but plenty of amazing artwork and excellent monster designs, while setting up what’s to come from this event.