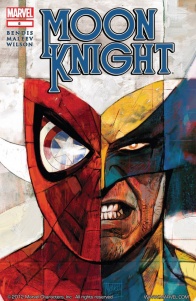 The new kingpin of L.A. has brought the fight to Moon Knight’s front door and now Marc Spector is going to return the favor. Moon Knight unleashes hell on the L.A. underworld in his race to uncover the kingpin’s secret identity!

After leaving our heroes surrounded by police at the end of the last issue, “Moon Knight” #5 kicks off moments later with Moon Knight trying to work out the best way to handle the situation via his three Avenger personalities.

The opening few pages are fantastic. Maleev makes the panels feel full up, with Petit’s lettering only further filling the space to make the situation feel very claustrophobic and make the Avenger personalities arguing more intense. In addition, Wilson’s colorwork shines once again. The backgrounds of the panels alternate between red and blue to injects a further sense of panic and emergency into the book and all the characters are shaded blue or red, not only giving the scene a realistic feel, but making the scene come to life, with the characters pulsing the different colors like with the police lights.

Having seen the Spider-Man and Wolverine personalities used in the first four issues, it’s refreshing to see Moon Knight opt for Captain America’s suggestion this time, which is to react calmly and try to defuse the situation. This first-time adoption of the persona does not end well. The police officers ignore him, not aware of who Moon Knight is, with one of them not sure what a Moon Knight is. However, despite not knowing him, they still take the opportunity to try and take photos of him, hoping to make money from them online. Here, Moon Knight’s patience runs thin and he bursts out and fights them off, leaving Echo behind. Echo, of course, manages to escape on her own. While seeing our heroes escape from the clutches of the law is a good thing, the continued presence of the cameras on the police officers’ phones throughout the fight could cause the police to put a target on their backs.

The action sequences in this issue have a real energy, an urgency in them, not only because of the nature of them being an escape, but also because we see Moon Knight doing different things. In this issue, he’s flying through the streets of L.A like, well, (I hate to make the comparison that is so often used with Moon Knight) a bright white Batman soaring through the streets only for him to land on Echo’s escape vehicle. From there, he rips off his cape to chuck it out towards the pursuing police cars to block their windscreen. Not only a resourceful method to try and get away, this moment allows for an amusing exchange between Marc and Buck about how the cape was, with Marc asking for another one. Clearly, he’s not as wealthy as Bruce Wayne, otherwise he’d have another one set aside.

While Moon Knight and Echo both managing to escape police on their own, the same cannot be said for the returning Tick Tock. After being held for some time to get him to give up information, Tick Tock seems incredibly close to giving Detective Hall something significant in their investigation. Unfortunately, with his lawyer turning up just in time, we’re left with another close call with any answers to the Mystery Power plotline. It’s clear there’s still a long way to go before we’re given any answers about the Mystery Power. There may not be such a long way for Tick Tock to go now though, if the Mystery Power finds out the Tick Tock was so close to breaking.

Buck returns in this week’s issue to pick up Moon Knight after his escape. He was having an evening off, spending at the strip club run by Snapdragon. This scene is only short, but Bendis manages to fill it up with potential for the future. We’re already aware of Snapdragon’s intentions for her workers to learn information, but Buck isn’t and, despite his resistance to interrogation, I don’t think it will be long before someone ends up connecting the dots between him, the TV show and Moon Knight.

Overall – After being critical of issue #4 last week because the issue failed to further the Mystery Power plotline, I feel foolish to view this week’s as a significantly better entry in the series, but there’s far more threads being played with this week which makes for a much more fulfilling read.