A missing magic butt, a collection of weird visions that make Miss Cleo and all those other late night psychics look tame by comparison, and that milestone of the First Relationship Spat. Sounds just like a normal day in Blython. Whatever normal means. 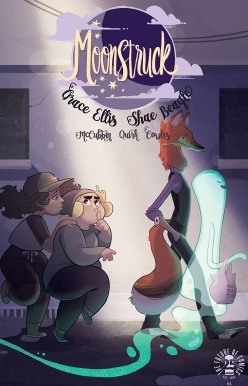 So Chet still doesn’t have his butt, but there’s a plan to get that butt back by capturing the ghost that knows the magicians that stole his butt in the first place. Sounds simple, right? Not so much when one of your team members’ inner eye seems to be going havoc with some pretty disturbing visions, and two more of your team members (who just happen to be dating) are having trouble in paradise.  Will Chet find that pilfered posterior, or will all the internal conflicts doom it to the unknown forever?

I don’t think I am ever going to get tired of writing “stolen butt” or any of its variations. (“Pilfered posterior” is my personal favorite.) So it’s a shame this issue is the penultimate one for this story arc. We’re either going to have to find Chet’s behind or accept its new residence at the Island of Lost Things. As it has been a while since the last issue, you may want to re-read issue #3 to find out what the exact plot the Little Dog 2 crew have to find answers for. But if you don’t have time for that, it is the busy and festive holiday season, after all, here’s the “tl;dr” version: get the ghost that knows the most and get that most out of him. (Or her. Or they. Let’s not assume gender in the Blython universe.) And what is a plan if it doesn’t have a few kinks to overcome?

This is one of those filler issues that sets the chess pieces up for the final confrontation and resolution and that’s okay. It’s not without major revelations or movement: Julie and Selena have that relationship milestone of The First Fight. For all the positioning in Cassandra’s visions about whimpers ascending to roars and the ominous vignettes of the couple within her visions, the actual moment of conflict seems . . . anti-climatic. There was nothing in previous issues to suggest any sort of tension, but sometimes even the smallest of irritations causes your emotional pot to boil over.

With this penultimate issue, I would be remiss if I did not offer my praise for Grace Ellis for providing a touching, heartfelt exploration of the queer experience within her universe alongside a fun fantasy story. Ellis includes non-binary characters such as Chet and same-sex relationships at all stages as part of the fabric of the narrative, not there for the simple sake of providing diversity. As an activist and ally for the LGBTQ+ community and a geek, I’m always on the lookout for healthy representations of queer lifestyle within our comics. Those kinds of stories are the best at gently educating, explaining, and reaching those who need to hear the message most. I’m reminded of the afterword from the first issue of “Kim and Kim: Love is a Battlefield” that calls upon creators to embrace the entire queer experience in their characters, which Ellis is doing beautifully:

But whereas queer superheroes tend to be locked into that one partner, real queer people often have multiple partners… Queer people have bitter exes, awkward longterm crushes, people they’ve flirted with for years but it never quite happened. Queer people have friendships with other queer people that are 100 percent platonic. In comics…we finally see queer characters who occupy entire queer universes.

Further beauty can be found in this issue’s art, which continues to be a fanciful pastel wonderland. Julie appears in her fairy dress that is straight out of The Wizard of Oz, one almost expects her to float into the cafe in a bubble. Caitlin Quirk’s colors have this blush of optimism, even in the darkest of Cassandra’s visions or the shadows of an interrogation. Shading provides depth as needed but it’s a gradual, blended so flawlessly you almost miss it. The love of the lighter side of the spectrum doesn’t diminish the intended fear and terror of Cassandra’s visions. They’re bordered in black and purple to show darkness, magic, mystery, spirituality, and the presence of a third eye. It’s a wise choice: in addition to those properties, purple is the combination of the warm, energetic tones of red with the cool, stable tones of blue.  As there is both energy and calm within these panels of Cassandra’s mystic tellings, it couldn’t be a better choice.

I’m still not convinced of the purpose of the Pleasant Mountain Sisters interludes in each issue, though this one does allude a little bit to this comic’s final pages. Kate Leth is having fun switching up drawing style from Shae Beagle’s softer, rounded, thinner lines to a heavier ink that looks right out of a 1980s/early 1990s Saturday morning cartoon. Just like The Baby-Sitters Club books that had to have been the inspiration for the series, it’s heavy on the color block nostalgia.

This issue also features some rather inventive panel layouts. Cassandra’s first vision appears in black and purple soap bubbles, distinct bubbles enveloping each member of our ensemble but connected by a purple membrane, illustrating our characters independence but continuing interconnections.  The second vision takes on even darker tones with a 3×3 panel layout, but Beagle and Quirk’s art style has a pastel crayon effect here, so it’s scary with a side of non-threatening. The final pages, the fulfillment of the opening prophecy, take up the entire page, and while Cassandra only has one eye visible, you can see the fear at what she probably dismissed as a bad dream coming true. Finally, Clayton Cowles’s lettering runs a wide variety of styles: purple and white for divinations, teal curvature for the target ghost’s first appearance, white on black for the panic of frightening predictions coming true.  The main lettering is still a little too small for my taste.

I’m very grateful that this book exists, for its boundary and convention breaking in writing and art. I’m sad it has to end.

Final Verdict: 8.1 – Clever color choices with creative meaning and ingenious paneling make even this setup issue for the final showdown a feast for the eyes.