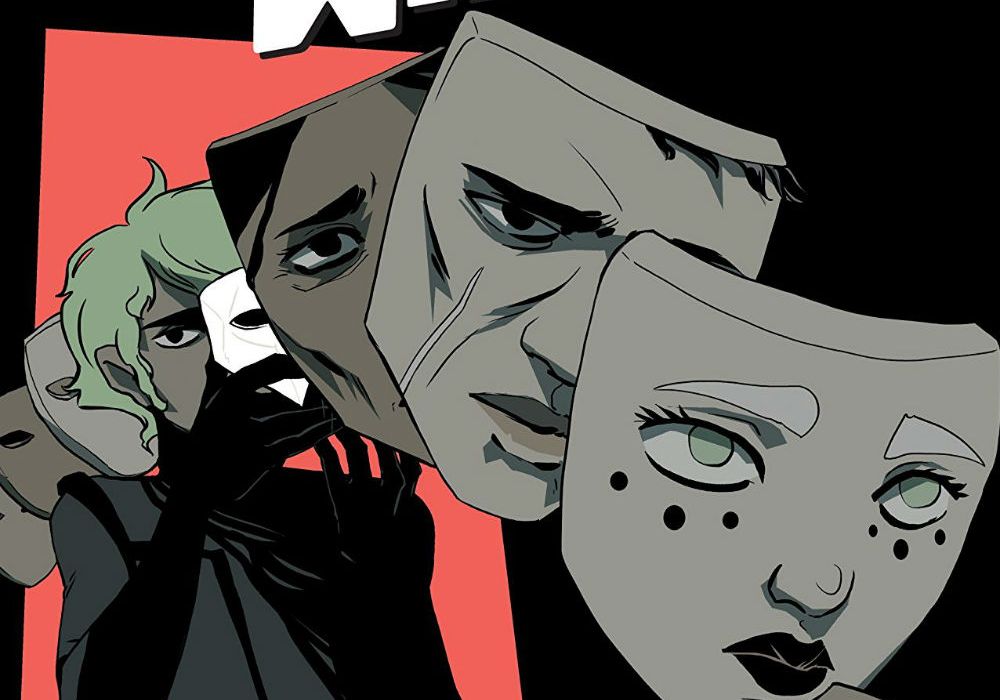 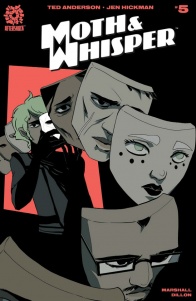 After a stunning revelation about their parents from their unexpected new ally, Niki is ready to take the fight to Ambrose Wolfe once and for all. Taking out the most powerful man in the city won’t be easy when he knows they’re coming — but then, the Moth and the Whisper are known for accomplishing the impossible…
A Young Adult cyberpunk thriller starring a genderqueer super-thief, MOTH & WHISPER is the brainchild of Ted Anderson (My Little Pony, Adventure Time) and Jen Hickman (Jem and the Holograms, The Dead) — a socially significant and engaging story that AfterShock is proud to tell.

“Moth and Whisper” #5 is an OK conclusion to an OK book. To bury the lede any more would be foolish. Despite the ideas at play, the comic never seemed to find its footing and instead circled around the tropes of the heist genre, toying at new ideas without every allowing any of them to coalesce. The only successful aspect of this was the protagonist’s genderqueer identity being central to the narrative in an overt and covert manner — the heist aspects taking a noticeable step backwards into the background.

That isn’t to say they are not present in issue #5; they are highly prominent, but the impact that they have emotionally is minimal. The whole climactic heist, which is more of a B&E with a tiny bit of trickery, is rote and by the numbers.

It’s like watching the figures of a cuckoo-clock: well-choreographed and plotted tightly but ultimately the same as the last hour’s performance.

Hickman’s art in “Moth and Whisper” #5 isn’t dynamic enough to carry the action either. Their figurework is solid and the environments and backgrounds are well constructed but there is a flatness to them that is highlighted by the darkness.

Hickman’s artwork seems to work best when they’re going all in on their stylizations. They know how to use negative space and solid colors to great effect — see the scene where Niki describes their parent’s parenting — but in the main portions of the comic, this isn’t present.

In particular, the coloring is a distraction, a mixture of washed-out browns, greens, blues and grays, which dims the artwork just enough to simulate night but not enough to provide the requisite atmosphere. Presentation is standard, with very little stylistic risks being taken, which contributes to the flat feel. There are a few clever moments but it feels like the team never truly takes advantage of the conceit nor the setting, which ends turning what would have been the triumphant end to this narrative point into an OK version of a well-thought out idea.

A lack of tension to the break-in is a problem as well and indicative of “Moth and Whisper” #5’s biggest issue: the pacing is not balanced.

The heist, despite taking up at least 10 pages, zooms by, leaving no place for the tension in the scene, thereby making the pay-off at the end come across as hollow. It’s not that the plan is unbelievable or silly, it’s a brilliant one that was almost explained enough through the techo-babble at the start, but because the preceding scenes did not allow for the fear of capture to take hold, it is just another development without the right foundation. Additionally, the narration, and to a lesser extent, the dialogue, that is present throughout that scene did not need to be there, even if the “narrate the plan over the heist” is a standard trope. It, again, undercuts the tension and while it helps slow the action down, trusting Hickman to do that silently would have greatly benefited the scene and the reveal.

On the flip side, the execution of those tropes is still enjoyable. The cloak and dagger antics of Niki and Walter as they break into the building is presented well and while the tension may be lacking, the desire to know how they’re going to pull this off is strong. They set the scene in that regards well through the conversation between Niki, Moira and Walter at the start. Moreover, watching them thwart the villain is just plain cathartic. There is enough of a connection created through the other four issues, what with NIki hunting down the man they think is responsible for their parent’s disappearance and then the mind games he played with Niki, that seeing him get his comeuppance through a clever ploy is satisfying.

It’s also presented in a striking way, with the darkness being complete, and Niki’s goggles glistening green as they declare their victory. These are the moments where it all comes together and the fun, intrigue and execution of issue one re-appears. It doesn’t last, as the denouement drags on with a conversation that, while central and crucial to Niki’s arc, has been elucidated through previous conversations and is more of a restatement than conclusion. Still, it provides a voice to an experience for a character that does not always get such a voice and that is a good reason for its inclusion.

Small tangent: soliciting a mini as an ongoing is nothing new to the industry, nor is it something that can be helped: sometimes a series’ scope is changed for a variety of reasons. However, that change shifts expectations, one expects the pacing of the third issue of a five issue mini to have a very different feel to the third issue of an ongoing. I say all this because discovering that “Moth and Whisper” #5 was the end of the series (based on available evidence,) and not the end of the first arc, makes it end less on the open note it wanted to but on an unresolved one instead.

We never did find out what happened to Niki’s parents, which is perfectly fine. But after spending so many pages with it being the sole driving motivator, having it taper off into nothing in the final issue when the expectation was that it would be resolved at a later point, or at least the story would have the time to explore why it is no longer important to Niki what happened, only that it did happen and now they can move out from their parent’s shadow, hits a discordant note that impacts the reading of this issue on its own.

As a trade, it may have less of a impact but as is, it harms more than it helps.

Final Score: 5.9 – “Moth and Whisper” #5’s strengths are the same as always but the weaknesses are more readily apparent now that we’re at the end, closing out with the thought that a little more decompression would’ve gone a long way.