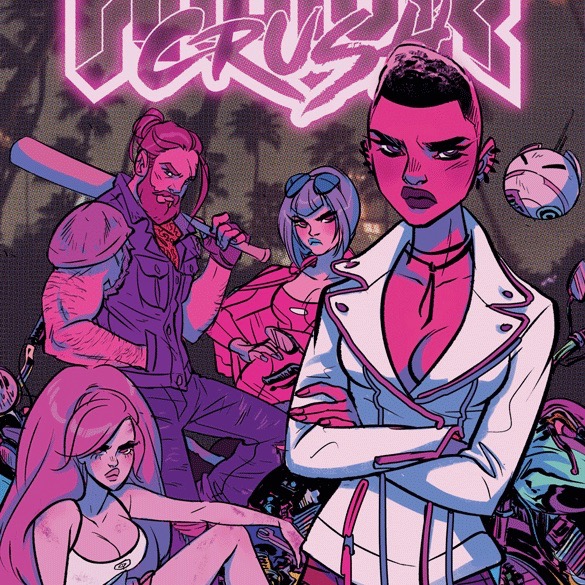 With a strong female lead and an intriguing premise, “Motor Crush” works best when it knows exactly where it’s going. Issue number eight hits a rough patch in the middle but recovers just in time to finish with a brilliant cliffhanger. 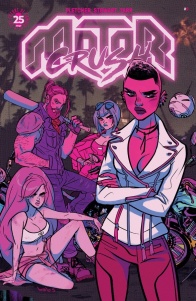 Calax leads Team Swift to a potential new source of Crush as Domino’s past races back to haunt her.

The first arc of “Motor Crush” was all about the need for speed, drawing obvious comparisons to the campier, more childlike “Speed Racer.” (Full disclosure: my favorite show of all time.) Certainly, there were various subplots and layers, but throughout the first five issues things clearly centered on celebrity racer Domino Sullivan, her meteoric rise to fame and the intense pressure she faced to stay atop the leader board.

The major plot twist, of course, is Domino’s addiction to the titular “machine narcotic” crush, which we soon came to learn doesn’t just give her a competitive edge, it keeps her alive. Her addiction also dragged her into the seamy underworld of illegal street racing, for which the nightly prize is a precious vial of neon pink crush. Creatively, there was also an interesting layer of intentionally intrusive, social media inspired metadata that punctuated the main narrative while reinforcing the futuristic setting.

Now, with the second arc in full swing, many of the elements that first defined the series — from the intensely competitive motorsports aesthetic that constantly fixated on the standings to the social media atmospherics to the race inspired plot structures — have completely fallen away. This isn’t necessarily a bad thing, but it’s a definite change in direction. Domino’s life-or-death need for the illicit neon pink drug that fuels her motorcycle and body is clearly the major plot line, overshadowing everything else.

Did I happen to mention that crush is neon pink? Because, if there’s any lingering doubt as to what this installment is all about, from the cover all the way through, there’s a veritable crap ton of neon pink. Some of it feels natural, thoughtful and strategically placed; some of it feels heavy-handed, a tad too obvious or downright indulgent (more on that particular issue in a minute).

All of that aside, after a one-page scene that efficiently sets the stage for the final cliffhanger, issue #8 seamlessly picks up moments after chapter #7 ended. From there, we get a great action sequence and much of the book’s best artwork. After a tense confrontation that also nicely intermixes some critical exposition, Cal and Domino make their escape. Illustrators Babs Tarr (on pencils) and Rob Haynes (on layout) beautifully intercut between tension-filled, action-packed close-ups and larger, wonderfully rendered half-page panels bursting with detail and drama. It’s a brilliant combination motion lines and unique perspectives that throw you into the heart of the action from the moment Domino first hits the throttle until her bike disappears from view over the horizon.

Naturally, in order to catch our breath, things have to slow down after that. Instead, they grind to a halt. Back at home, Domino casually strips down to her underwear while Cal takes off his shirt, announcing he’ll spend the night. The two of them then speechify and power through some backstory, talking past each other in a sea of dialogue bubbles. Importantly, there is nothing sexual about this. In fact, as far as we know, Domino is only attracted to women. Presumably, her ex-girlfriend Lola knows this, too. So, when Lola shows up the next morning to find Domino half-naked and sleeping next to a bare-chested man, it feels entirely convoluted to see Lola get upset. Nonetheless, Lola scowls and glares, arms indignantly folded beneath her massive breasts, wordlessly conveying her jealous outrage in what can only be described as a self-indulgent clunker of a scene. Maybe somebody thought they needed to ramp up the sexual tension, but gratuitously featuring Lola’s cleavage as she stares icily at her ex-girlfriend is probably not the best way to do that. Lola has always had an unrealistic Barbie doll figure, but this is beyond distracting and utterly derails the story, especially because she’s always colored bright pink. She dominates every panel she’s in, whether she should or not.

Honestly, after this confusing middle chunk it takes several pages for the book to get back on track. Eventually, the new triumvirate of Domino, Cal and Lola enact their semi-ingenious plan and make their way onto Turtle Island in search of crush. In another nice action sequence, the art returns to form with excellent paneling, energetic pencils and a varied color palette that feels more deeply rooted in the setting and far less arbitrary. As the book comes to a close, it doesn’t exactly fire on all cylinders, but it comes close. And the cliffhanger is brilliant, framing the book in a way that hints at a brand new story line. Is it enough to redeem the ham-handed middle? Probably not, but at least it bodes well for the series as a whole. As the second arc closes out, things could get very interesting.

Final verdict: 6.1 – “Motor Crush” #8 starts off strong and returns to form at the end, but nearly crashes and burns in the middle.