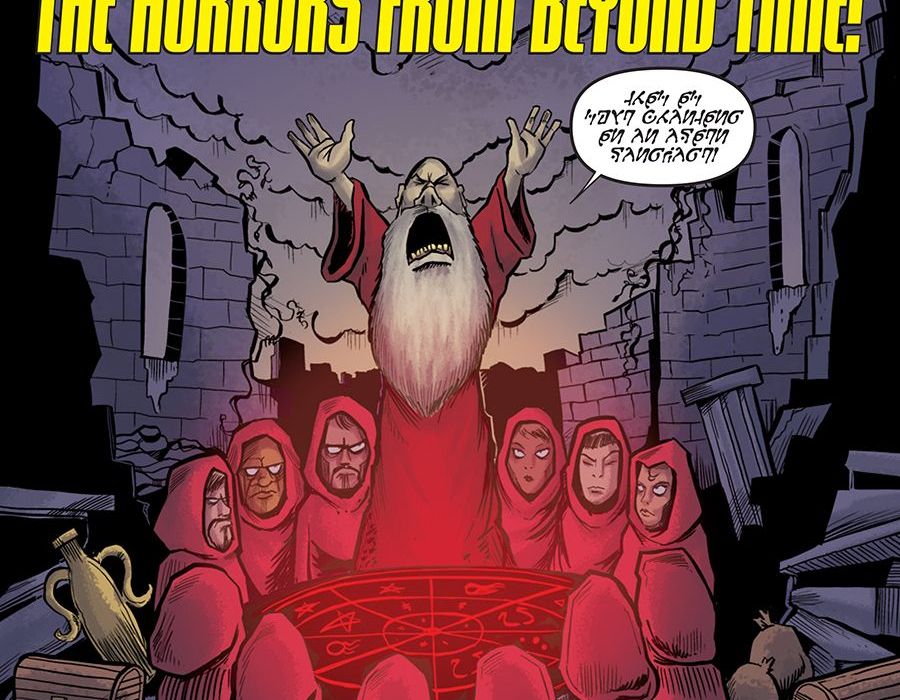 Last week I reviewed “Dungeons and Dragons,” so this week it only seemed fitting that I review a comic based off a game that’s loosely based off “Dungeons and Dragons.” By that, of course, I mean “Munchkin.” While the game is all about killing monsters, collecting treasure, and betraying your friends, the comic has been a series of shorts that can either poke fun at the fantasy, dungeon crawling genre, or explore any of the other “Munchkin” spinoffs, while featuring characters who… kill monsters, collect treasure, and betray each other. 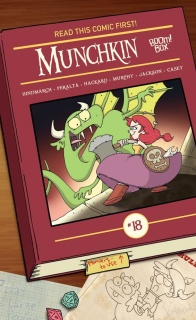 Written by Will Hindmarch, Andrew Hackard, and Steve Jackson
Illustrated by Len Peralta and Phil Murphy

Spyke and Flower are summoned to a different dimension when a cult tries to call forth Cthulhu!

When looking at a “Munchkin” comic, there’s rarely ever any need to compare it to previous issues. There’s little in the way of any continuing storyline, just a series of one-offs that quickly come and go. However, that makes it easy to judge each issue by its own merits, as each can hit or miss.

This time, the main story in the comic is less D&D and more “Call of Cthulhu,” featuring the game-typical assortment of investigators ready to take on the generic cult. By bringing in Spyke and Flower, the main characters of the “Munchkin” comics (I hesitate to call them “protagonists,” but they’re still main characters nonetheless), you get what would happen if a goofy D&D player somehow managed to bring his characters in to a game of “Call of Cthulhu.”

In short, the dark arcane horrors of H.P. Lovecraft meets adventurers who will happily beat up eldritch horrors for gold.

Unfortunately, given the length of the comic, it didn’t have too much time to explore the potential here. In fact, it was mostly just several panels of characters being confused, and then an explosive end.

That doesn’t mean there aren’t any worthwhile moments in it, though. There are some nice gags, everything is well-paced for what little space it has, and the overall “Munchkin Cthulhu” theme works quite well.

This is absolutely enhanced by the artwork by Len Peralta. The expressions, the character designs, and the use of colors all create a fantastic combination of “Munchkin” and “Call of Cthulhu.” The two full pages where the eldritch horror is called forth, accompanied by Spyke and Flower, are just excellent, and the “horror from beyond space and time” has a great design. Another panel, nearly taking up the whole page, shows Spyke and Flower ready to take on the horror, and makes those goofy characters look awesome.

The second part of the issue is a shorter comic, talking about one of the “Munchkin” game’s oldest monsters, the level 20 Plutonium Dragon. It’s short and goofy, getting in a few nice gags wherever it can, and the cartoonish artwork by Phil Murphy contrasts well with the darker art in the previous part. As a little short to highlight an iconic “Munchkin” monster, it’s quite acceptable.

Last but not least, it has a short one-page comic, written by Steve Jackson (creator of “Munchkin”) himself about remaining environmentally friendly, in the most Munchkin-esque way possible. However, as it is just a page long, it’s really just one joke, and can’t really be critiqued aside from “is it funny?” (It’s… okay.)

Final Verdict: 6.5 – while not necessarily bad, it doesn’t have as great a punch or as much hilarity as some previous issues. Still, it will certainly entertain anyone who’s a fan of “Munchkin” and the Lovecraft mythos.