“Naomi” is the second entry on the Bendis-managed umbrella imprint called ‘Wonder Comics.’ If the first of those delivered on big action, fast-pacing and known characters (“Young Justice”), this series is a much more character-driven, insightful exploration of identity and purpose, despite its superheroic surroundings. 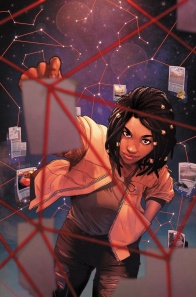 DC’s biggest, newest mystery starts here! When a fight between Superman and Mongul crashes into a small Northwestern town, Naomi (last name?) begins a quest to uncover the last time a super-powered person visited her home-and how that might tie into her own origins and adoption. Follow Naomi’s journey on a quest that will take her to the heart of the DC Universe and unfold a universe of ideas and stories that have never been seen before. Join writers Brian Michael Bendis, David Walker and breakout artist Jamal Campbell in Wonder Comics’ massively ambitious new series and star… NAOMI.

In today’s marketplace, delivering a series on a new, unknown character and property can be a daunting task, especially when working for the Big Two. There is a strong sense that the tried-and-true concepts are safer bets, so when a book like “Naomi” comes along, with such a strong and talented creative team, it deserves special attention. After reading this first issue, there is already enough to be very optimistic about this new story, including a big sense of anticipation on what might come next.

Before that, though, the present day surrounding Naomi is so elegantly portrayed, so beautifully shown that it deserves a lot of praise. What Campbell has made visually is to create a world, unique characters and a deep grounding of these adventures that feels deliberate and very well executed. First of all, Naomi’s hometown comes across absolutely as a three-dimensional world. That is achieved by smart use of repeating panels and page layouts that seem to be structured around where actual streets and buildings would exist. It is the same feeling that readers might get when reading “Watchmen,” when Gibbons would use panel layout that were consistent, symmetrical as to how an actual existing space would exist. Also, the bucolic feeling this town presents, the little details that show people going on about their day-to-day does not go unnoticed. On the single situation where large action breaks out, Campbell is no slouch either, with some very interesting compositions and strong use of movement lines to convey the urgency of what is happening.

Moving past the world itself and into the characters, it is very refreshing to see so much diverse representation in so few pages. Not talking about, necessarily and only, about minorities of race or gender, but also of different body types profiles and body language. Campbell certainly invested on making each bystander, each member of the supporting cast stand out from one another. That is specially fitting when the script adds further layers to them and how they talk and behave becomes further parts of their identity and representation.

Colors (also by Campbell) add the cap to this package, walking a thin line between what is the fantastic optimistic and the grounded reality. This town manages to be believable, and yet, feel slightly magical in a way. Not fantastic, as in an other-worldly environment, but perhaps that lightness that one gets on strolling around a very nice place, in a particularly joyful and sunny afternoon.

Bendis and Walker have a very deliberate choice of pacing in terms of plot and script. If the issue opens with a bombastic sequence, as zoomed in on superheroes as one can get, it is only done so to remind the audience on how incredible that would be for the real-life citizens of a small town. The jarring transition to the quiet life reframes the whole issue, and reader’s point of view, extremely quickly. It is almost as if it is telling that what the audience has grown used to in comic books, would be absolutely fantastical if not seen day in and day out. It resets the perception of what the reaction to these events should be.

After doing that, the pair fleshes out a number of characters surrounding Naomi. Readers start becoming familiar to her through the way that she treats and interacts with her friends and families, and how the feelings they have towards her is justified. In very quick fashion, Bendis and Walker provide the feeling that Naomi is not a new character, but rather one that you simply did not know yet. It might seem a bit vague, but the sensation is similar to when one starts reading comics, aware that the mythology is much richer than any particular issue.

As a hook for what comes next, Bendis and Walker deliver just enough to keep readers guessing. Again, the reveals come as a secondary item to Naomi’s exploration of her self-identity. And this is, perhaps, the best thing “Naomi” has going for itself: its lead characters is an absolute joy to read and get to know better. Real, emotional, filled with the questions that happen at that time in life and in a situation like the one she is in. Like a good new friend that you are just getting to know.

All in all, “Naomi” #1 is a great start. By choosing not to reveal a lot, to avoid the usual comic tropes, and, rather, focus on characters, the creative team allowed the best aspect of the package to shine the brightest.

Final Verdict: 8.9 – “Naomi” knows what it wants to be and the message it wants to deliver. By focusing on creating such a compelling new character and letting the story unravel around her, the creative team hit gold.