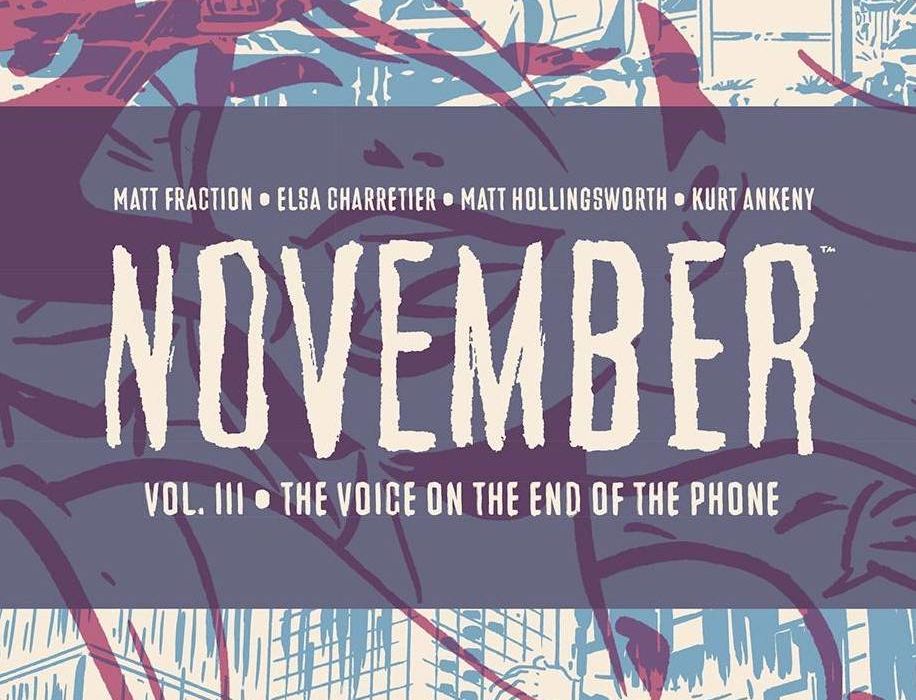 The penultimate volume of “November” has the creative team giving the reader the first glimpses at the overall narrative tapestry that they have been weaving together throughout the series of graphic novels. “November Vol. 3: The Voice on the End of the Phone” masterfully utilizes the space granted by its format, beginning with an expansive visual sequence, expanding the world and exploring the characters. This all builds to one of the best endings to a comic I’ve ever read. The series’ unique aesthetic and approach to development is evident throughout. The end of “November” may not yet be here, but it is in sight, and it is immeasurably enticing. 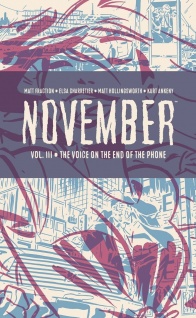 “November Vol. 3: The Voice on the End of the Phone” follows three women trying to survive through a manic time in the history of the city that they live in. While they initially appeared unconnected, the seedy underbelly of the city has touched them all. The tendrils of corruption grasp them, and drag them under throughout this neo-noir crime thriller.

Attempting to summarize the events of the first two volumes of “November” would do a disservice to the carefully controlled dissemination of information that these graphic novels were. “November” is not a series where you can leap in halfway through and expect to get a complete, satisfying experience. If you haven’t read the first two volumes, do so before even contemplating reading this third one. We have discussed both volumes (Vol. 1 here and Vol. 2 here) if you need a refresher.

As confident in execution as these two previous volumes were, “November Vol. 3: The Voice on the End of the Phone” is the creative team swelling their limits far above even their previously high watermark. This is evident from the second sequence, an extended depiction of a phone call between Kowalski and her estranged girlfriend. This could have been a couple of pages of dense text, a quick back-and-forth. Instead, the team behind “November” fills twelve pages with all of the emotion, tension, and loaded silence that such a high-stakes conversation would have. Ankeny’s handwritten letters add life to each strained phrase. Charretier gives form to each subtle shift in body language, and uses shadows to obscure true emotion until the moment at which revealing them will have the most impact. This exchange could only happen in such a manner in the extended format of “November”, with a team working as fluidly as Fraction, Charretier, Ankeny, and Hollingsworth clearly are.

With the tone of the book firmly established, the pace picks up considerably. When the plot is not unfolding, the reader is shown the life of Dee, both before and after her fateful deal with Mr. Mann. Charretier handles these small character moments and frantic action with equal levels of finesse and heart. These glimpses add even more depth to an already nuanced character, and help to show how Mann’s enterprise pushed Dee over an edge that she was teetering over for a long while. Hollingsworth uses flashbacks to break his established, incredibly limited color palette for a scattering of panels throughout the book. Each time this happens, it catches the reader off-guard, because they have become so used to the colors attributed to each character. These palette breaks are another example of the team showing their skill and adding meaningful elements to “November” in its penultimate volume.

These elements, old and new, all come together to bring about a pitch-perfect finale. The chaos and panic throughout the middle parts of the book keep the reader from feeling comfortable or knowing what to expect, amplified by the increased, disorienting breaks in Hollingsworth’s color palette. When the end does arrive, it both surprises the reader and feels perfectly fitting for what has happened in the book up until that point. Matt Fraction has described the ending as ‘the best last page [he’s] ever written in [his] career’, and I am inclined to agree. It puts a neat cap on the series up to this point and leaves the reader giddily awaiting the final volume.

“November Vol. 3: The Voice at the End of the Phone” is one of the most unique and fascinating graphic novels to come out this year. It plays with the possibilities of both the graphic novel series and the medium of comics. Each member of the creative team exhibits some of the best work of their respective careers. The volume flows towards a climactic ending that is almost cruel in how effectively it builds anticipation for the fourth and final volume. I could edit this piece for days to try and find an ending that is even close to the same league as the third volume of “November”, and still fail. Go read it.