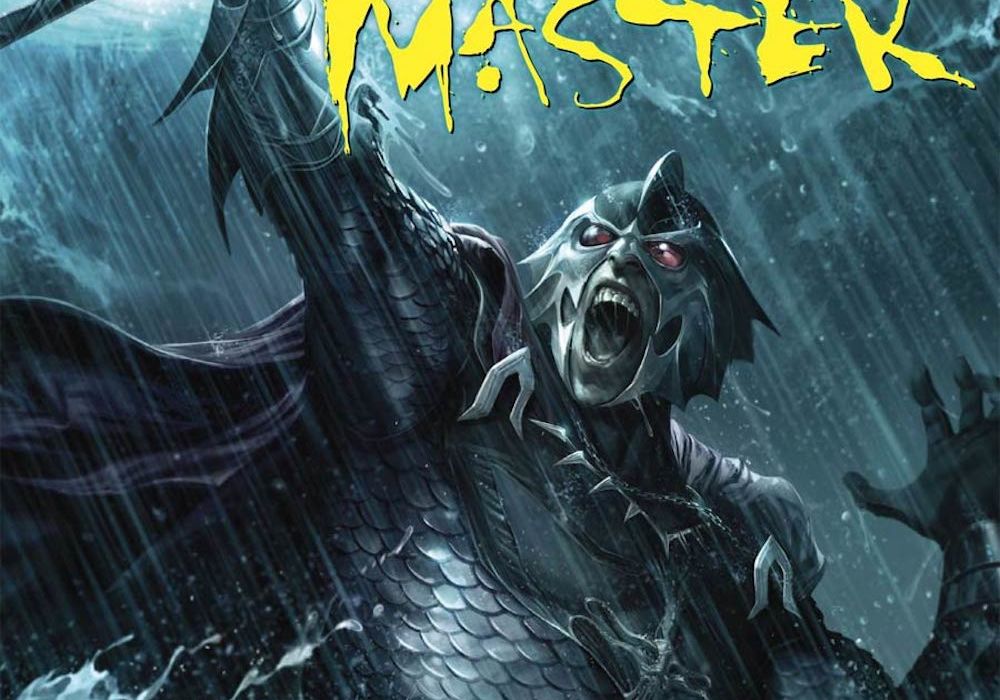 Somewhere, below the sea, there’s sadness waiting for he… Ocean Master, that is, in this masterfully crafted tale of obsession and misplaced focus. 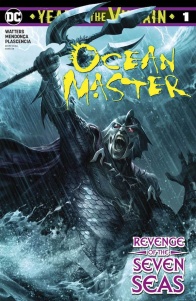 Orm Marius lost nearly everything following the events of ‘Drowned Earth’-his crown, his love, and his freedom. Now, in the battle between justice and doom, Ocean Master struggles to find his place. But don’t count him out just yet-Ocean Master is about to prove exactly what makes him the true king of the seven seas when he discovers a new power that will change the tide forever!

Ever since his reemergence in the post-Flashpoint New 52 timeline during “Throne of Atlantis,” Orm Marius, better known as Ocean Master, has been not a diabolical mastermind or up-front villain, but rather a more sympathetic figure who is just trying to help the people of Atlantis. The prosperity of the kingdom he wishes to rule, achieved mostly without his involvement, lends itself, alongside the overall “Year of the Villain” storyline, to a character-centric tale that holds true to the very essence of this fallen king through his various trials and tribulations: a tragedy.

Dan Watters crafts a story that weaves into the very core of Orm, showcasing not only the negative aspects of Ocean Master as would be implied by him having a “Year of the Villain” one-shot, but also his positive qualities, such as they are. Ocean Master truly wants to be a good man, to defend Atlantean interests against encroachment from the surface. He even has a different reaction than almost any other person who is directly contacted by Apex Lex Luthor about receiving one of his dark gifts, and one that is very much essentially true to who Orm has always been in a way that some of the other recipients have seemed to act oddly given their own histories. However, he is much harsher of a figure than Arthur Curry or Mera, being quicker to act toward murder or revenge over negotiation, and blaming others for dying rather than mourning their demise. Furthermore, unlike the aforementioned other two rulers, Ocean Master places Atlantis above all else and constantly looks down on others on the surface to the point of choosing his kingdom over those he loves in almost any instance. As such, even when he does achieve victories, Orm Marius is still portrayed as alone and filled with loss, losing what he holds dear even with the best and most altruistic of intentions (from the perspective of his culture).

The inclusion of Orm’s surface-dwelling fiancée Erin Shaw and her son Tommy as what is primarily a framing device for the main adventure of the issue helps Watters to showcase both the humanity behind the helmet and the ominous nature of his focus on the undersea kingdoms. Having Erin call Orm out on his priorities and lack of admission to feeling any remorse pulls what is mostly a sympathetic view on the Atlantean back into perspective, giving a “common” voice to speak toward royalty in a way that Ocean Master would have often ignored in others he did not love. Essentially, Orm could have happiness and everything he wanted without focusing on politics and military matters of the ocean, but his obsession with duty and the defense of his people below the surface of the waves keeps pulling him back with the merciless tides. He is not an entirely sympathetic figure, with his seemingly final words to Erin about his plans for Tommy having a decidedly ominous bent to them (even if from his point of view they are generous), but in the end, even with him having achieved a significant victory, it is difficult not to feel sorry for this man who finds it almost impossible to change his ways.

Miguel Mendonca provides a high level of emotional resonance between the scenes themselves and the story they are telling. Action is slow and somber during the surface confrontation with Erin, befitting the depressed mood and overall feeling of betrayal. Using angles that give a more foreboding and at times shadowed view of Ocean Master, Mendonca helps readers to feel much more for Erin’s side of the conversation. When out of conflict and still in Atlantis, the art is more focused on Orm (justifiably given him being the narrator), but is also more even-handed, not lending itself too much toward benefitting him or the beggars with which he converses, to the overall effect of giving a relaxed feeling to the entire encounter as he feels at home, even if said home is far from the throne he wished to rule. When it comes to heavy action sequences, the artwork is brutal and unforgiving, presenting a perspective that benefits whoever is more in charge of a given encounter, be it a combatant or even the dangers of a high-pressure environment in and of itself. Mendonca also makes excellent use of facial expressions. From Erin’s rage and sadness to Orm’s own fury, the audience can feel the emotion bleeding off of the page they are reading.

Ivan Plascencia’s use of dark, cool colors for the story fits both its locations and the narrative’s mood itself. On the one hand, these hues and shades are useful due to the surface portions taking place at night, and the undersea ones being not only below the ocean, but in the darkest areas of Atlantis and the trenches beyond. Even the new characters introduced seem to have a sea green color to them, working well with Ocean Master’s obsession with the sea.

On the other hand, Plascencia’s colors fit perfectly with the sometimes somber and often tragic nature of Orm’s quest. He is in a dark place mentally and emotionally, so it stands to reason that colors would interact well with said overall tones, barring a few exceptions amongst the sea-changed mutants below.

Final Verdict: 8.0– Diving deep into the depths, the tale of Ocean Master provides a beautiful story of his continued fall from internal peace.