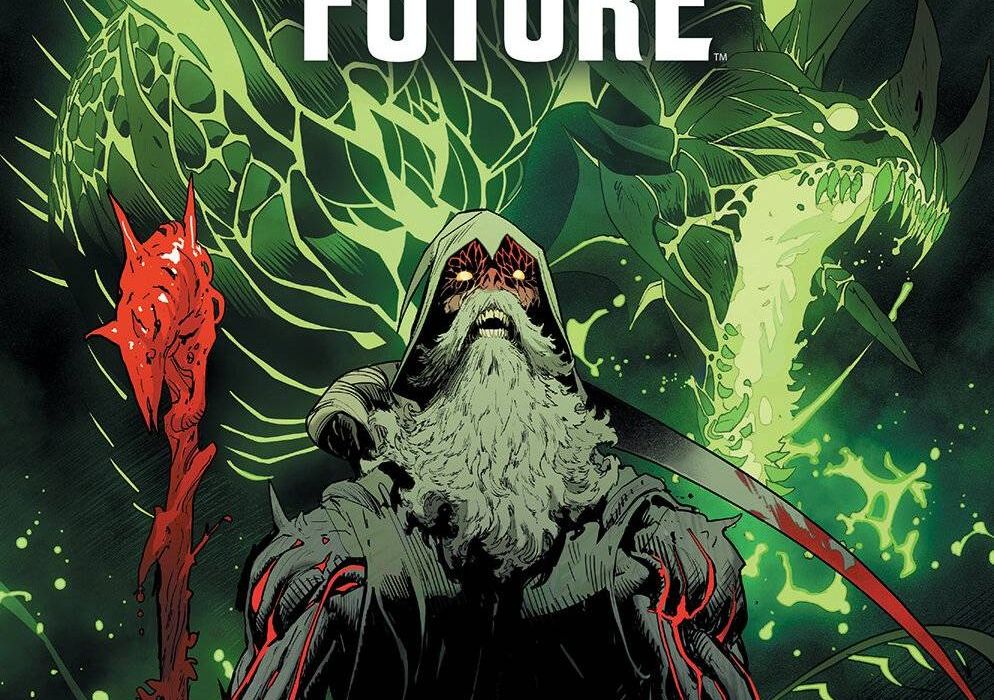 With a new arc underway in “Once & Future,” it’s time to meet new threats and characters. What new twists does Kieron Gillen have in store for his intrepid adventurers, and what aspects of English folklore will come into play now? We find out in issue 8, so there are some spoilers ahead. 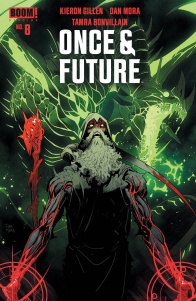 When a strange newcomer arrives at the dark court of Camelot, his presence disrupts The Otherworld. Sometimes winning the battle risks losing the war…as Duncan and Bridgette will soon find out.

I’ve often praised Kieron Gillen for his writing. The story, dialogue, and characters he creates draw us in to engaging adventures filled with wit, twists, and personality. “Once & Future” embodies this with Duncan and his gran, Bridgette, as well as the addition of Rose to their team.

That remains true throughout the entire issue. Whenever Duncan and Bridgette are on the same page, the dialogue is clever and snappy, filled with their distinct voices. The chemistry between the characters is great, giving us their familial connection while still showcasing how very different they are.

While Rose only gets a short appearance in this issue, she’s still a welcome addition to the team. Her ability lets her immediately point the cast towards the next plot point, which is convenient for keeping the story moving, but also lets us know when the plot is about to crash into them.

Speaking of the plot, the first few issues gave us a dark tale that twists the King Arthur mythos. Now that’s expanding to additional older tales with the addition of other stories. In this case, Beowulf. His introduction is fantastic, bursting in to Arthur’s hall (as Beowulf is known to do). We get a nice clash between forces, showing off their might and artwork for just long enough to make full use of the art without overplaying their hands.

Not only that, but another character enters the story. I’ll avoid spoiling his identity, but Arthur’s reaction provides interesting setup for things to come.

The use of story archetypes and roles within the main story plays with the structure nicely. While the first arc placed characters in Arthurian roles, including specific knights, the addition of Beowulf reframes how they’re positioned. With Beowulf as their enemy, Duncan and Bridgette are described as “a monster and a mother,” framing them in the context of Beowulf as Grendel and his mother. Stories and the roles of characters in them have an important role in “Once & Future,” so it will be interesting to see how they work within this framework.

And of course, we also get a little foreshadowing of threats to come and multiple motivations that can drive characters one way or another. Every page gives us something new to consider, and one can never predict exactly where Kieron Gillen will take his stories.

Since “Once & Future” is a horror-themed comic, the buildup starts paying off well within the issue. It drops the threats on our heroes quickly and puts them in immediate danger, although it also takes the moment to tie the last line of the issue into the first to bring the issue full circle.

At this point, I’ve spoken a lot about Kieron Gillen’s writing, but that’s just half of what makes “Once & Future” great. Dan Mora’s artwork and Tamra Bonvillain’s colors do an amazing job bringing the story to life.

Dan Mora is a perfect choice for this comic and its story, which is no surprise since Kieron chose this story specifically after being asked to work with him. His art style is detailed and captures the horror theme wonderfully, even when not dealing with the monsters.

The dark atmosphere and ominous scenery makes even scenes where the characters stand around talking feel tense, especially with the solid character designs and expressiveness he gives them. But Dan Mora’s artwork really shines when we see the more monstrous characters, like the reanimated, skeletal King Arthur or the burning berserker that is Beowulf.

There’s a perfect blend of intensity and creepiness that he gives each of the characters. Their undead-esque appearances and glowing eyes make them feel truly monstrous, especially when the flames around Beowulf dance with intensity.

Then we have Tamra Bonvillain’s color work. The things Tamra does with color is wonderful; it sets the dark tone nicely, but there’s this significant shift in the overall color scheme when the monstrous and supernatural appear. It creates a sense of unease while adding to the visual style of “Once & Future” and making the scenes feel eerily unnatural. The green and purple shades are put to great use, especially when contrasted with the dark blue shades of the night scenes.

“Once & Future” continues to impress, with wonderful characters, great story progression, and suitably grim artwork. It’s a thrill to read from the first page to the last.

Final Verdict: 8.0 – A great comic with an all-star team, creating a story that draws you in from the very first panel.