Ahoy, mateys! For this year’s Summer Comics Binge, I finally tackled a huge gap in my manga library; the gargantuan “One Piece,” written and illustrated by Eiichiro Oda. I journaled my way through the first 100 chapters, making up the East Blue Saga. Last week I finished things up and was very satisfied with the book thus far. This week, I present a very special endeavor…the first ever Summer Comics Binge Gummy Gummy Awards! 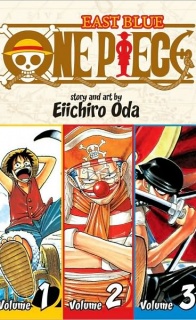 As a child, Monkey D. Luffy was inspired to become a pirate by listening to the tales of the buccaneer “Red-Haired” Shanks. But his life changed when Luffy accidentally ate the Gum-Gum Devil Fruit and gained the power to stretch like rubber…at the cost of never being able to swim again! Years later, still vowing to become the king of the pirates, Luffy sets out on his adventure…one guy alone in a rowboat, in search of the legendary “One Piece,” said to be the greatest treasure in the world…

No surprises here, Luffy’s the first and greatest Devil Fruitee that we meet in the the ‘East Blue’ saga. From his first “Gum Gum Rocket” to the “Gum Gum Battle Axe,” the creativity with which he uses his stretchiness to vanquish villains is astounding. Furthermore, the amount of comedic relief Oda gets out of Luffy’s ability is top notch. 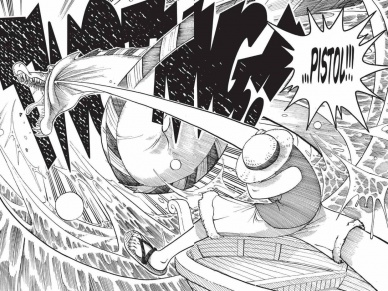 This battle comes smack dab in the middle of the “Baratie” arc, derailing the events pretty significantly. That said, seeing two great swordsman giving it their all, with Zolo fighting within an inch of his life, is one of the most surprising and interesting action sequence in the series’s first 100 chapters. 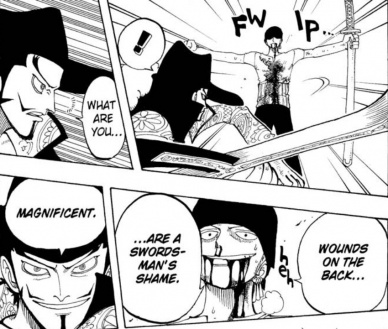 From the moment I saw Buggy I said to myself, “this guy has Frieza energy.” Early villains in shonen manga are often some of my favorites. Buggy makes a very lasting impression in his first appearance thanks to his Chop Chop powers and his colorful henchmen. I loved Oda’s use of the title pages, showcasing his efforts to reclaim power behind the scenes. It all culminates in a surprising and exciting return in the last few chapters. Also, Buggy arguably comes the closest to defeating Luffy. For all of these reasons, I crown him “best villain.” 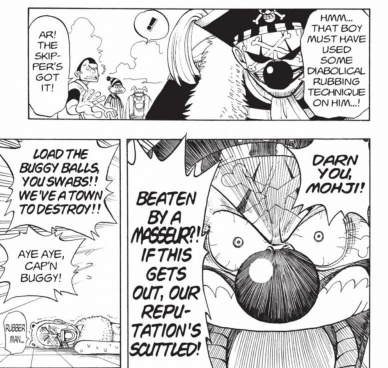 Gaimon is a tiny green haired man living in a treasure chest on an island of misfit chimera animals. I don’t think I need further explanation. 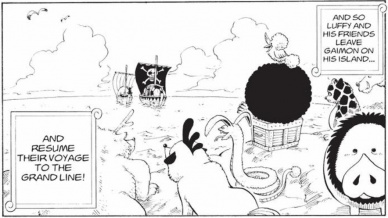 Many of the goodbyes we see in “One Piece” are extremely dramatic, wrought with emotion and big, hearty tears. However, Nami’s arc is by far the most tragic and powerful. The loss of her adopted mother, her subsequent entrapment and grooming under Arlong, and her secret quest to save her village makes for a truly powerful tale of redemption. So, when we see her leave her village behind, I’m very glad she gets to do it in a way that’s distinctly “Nami.” 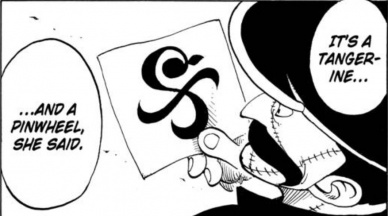 Luffy is the main character and he’s very funny, but that’s about all he has going for him. He’s stubborn, ignorant, a little selfish at times, and he often makes situations infinitely more complicated and dangerous than necessary. Sure, he regularly saves the day and he may one day be the Pirate King, but for now…he kind of sucks?

I really wanted to rank Zolo higher. He has the whole “stoic samurai” vibe that I’m a huge mark for, so it’s a testament to just how much I loved the remaining Straw Hat characters that he comes in near the bottom. Zolo’s origin is arguably one of the weaker ones, but his quest gains a lot of momentum thanks to his newfound rivalry with Hawkeye. After Luffy, the final chapters arguably do the most for Zolo, positioning him on a quest to not only become the greatest swordsman, but to track down some legendary, potentially magical swords. That’s very impressive.

Nami is the actual best, even though she comes in at number 3. First, she has a bo staff, which is a very awesome weapon. Second, she’s the only one of the Straw Hats who can function as a human being. Third, she’s arguably the only Straw Hat to have survived and overcome extreme tragedy and insurmountable odds. I certainly hope that she gets to use her newfound agency and freedom to really take charge on the quest to the Grand Line.

Sanji has the best personality of all the Straw Hats. Sure, he’s a womanizer, but he can also cook, he’s very suave, and his code of honor very respectable. Most importantly, when it comes to style, Sanji is second to none. He steals every scene that he’s in and honestly I want to be him.

Usopp, you sweet boy. He’s a joker, he’s a smoker, he’s a midnight toker. Ok, I “lied,” he’s only one of those things. Usopp doesn’t have any useful skills besides his wit and his trusty slingshot. He’s a bit of a coward, but I would argue that he has more heart than any of the other Straw Hats. Yes, even more than Luffy. His battle against “Choo” of the fish-men feels triumphant in a way that the other battles don’t. I certainly look forward to this misfit’s journey to become a better person, which, if we’re being honest, is the truest and best goal of all. 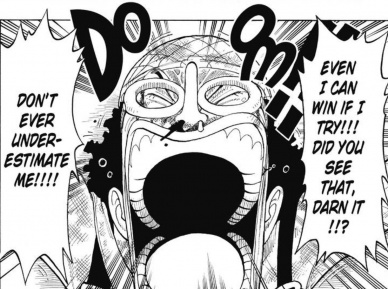 With all the awards handed out, I bid my farewell. I thank any and all who have joined me on this journey, as well as to any who may come along in the future. I plan on continuing to read “One Piece” in my spare time and perhaps I will return with some thoughts. In the meantime, keep your treasure safe, but maybe think about sharing it with others as well.