Ahoy, mateys! For this year’s Summer Comics Binge, I’ll be tackling a huge gap in my manga library; the gargantuan “One Piece,” written and illustrated by Eiichiro Oda. Over the next few weeks I’ll be journaling my way through the first 100 chapters, making up the East Blue Saga. This week I’m covering volume 3, consisting of chapters 18 through 26. This volume wraps up the Buggy arc and takes our characters to another village with more problems. 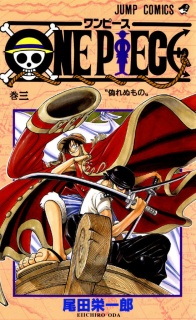 Sure, lots of people say they want to be the King of the Pirates, but how many have the guts to do what it takes? When Monkey D. Luffy first set out to sea in a leaky rowboat, he had no idea what might lie over the horizon. Now he’s got a crew–sort of–in the form of swordsman Roronoa Zolo and treasure-hunting thief Nami. If he wants to prove himself on the high seas, Luffy will have to defeat the weird pirate lord Buggy the Clown. He’ll have to find a map to the Grand Line, the sea route where the toughest pirates sail. And he’ll have to face the Dread Captain Usopp, who claims to be a notorious pirate captain…but frankly, Usopp says a lot of things…

Chapter 18: The Pirate Buggy the Clown

Time for the main event! Luffy vs. Buggy, two devil fruit empowered clowns duke it out. It’s actually a pretty interesting fight, thanks to Oda’s creative use of their respective powers. Buggy literally cuts loose, converting his lower half into a semi-human buzz saw. Stretching and splitting makes for a lot of dodging, making for a frantic fight sequence that covers a lot of ground. Oda’s artwork really shines here, particularly in terms of perspective. Panels with motion toward and away from the reader are nearly as common as those with left-to-right movement, making for a chapter that feels surprisingly three dimensional. 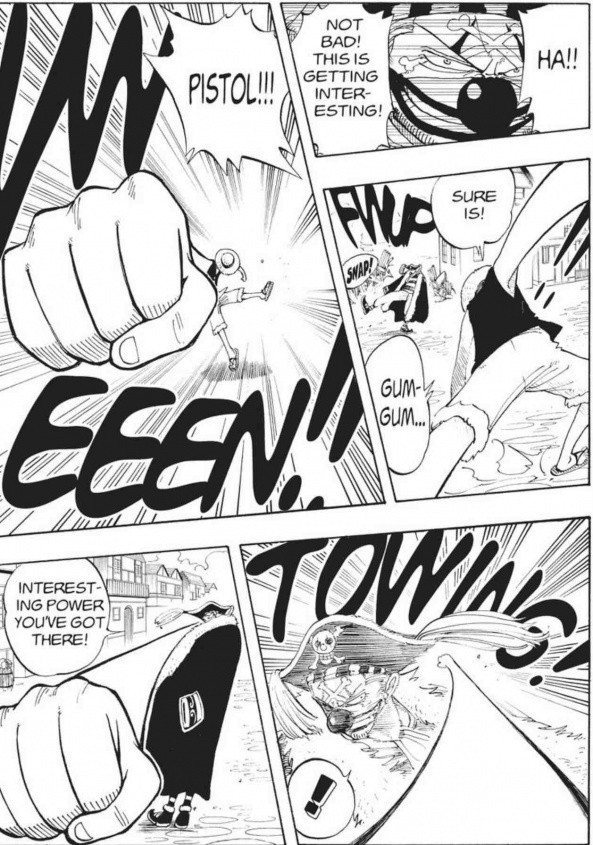 Th chapter ends with Luffy at wit’s end, thanks to a decisive attack that leaves his precious hat irreparably damaged.

Here we get an extended look at Buggy’s origin, which just so happens to feature a young Shanks. Again, Oda’s sense of humor is on display as he showcases Buggy’s bumbling efforts to strike it rich, culminating in his consuming the Chop Chop fruit. Buggy’s twisted perspective is further highlighted by his skewed recollection of Shanks. It’s not the most original backstory for a villain, but it does add another layer to the current day proceedings.

Chapter 20: The Way of the Thief

This chapter is an absolute blast. Buggy goes all out, flying around like a bat out of hell. However, separating your vital body parts has its downfalls. While Buggy’s upper half flies headlong at the thieving Nami, Luffy lands a decisive blow. 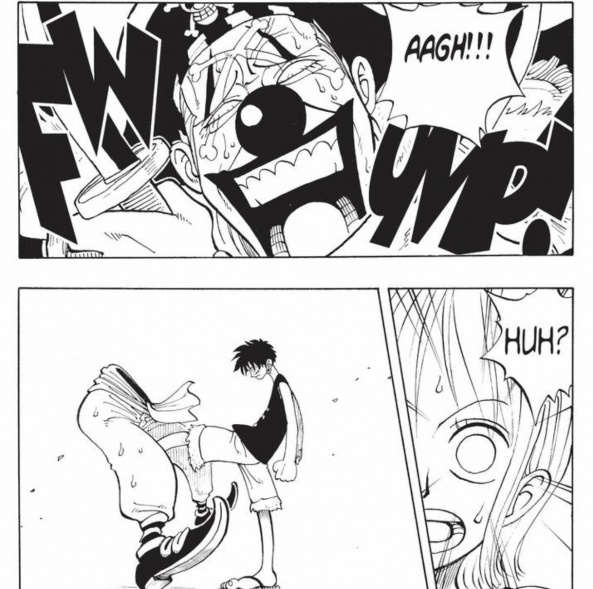 It’s a little crass, but it works! Even better, when Buggy splits apart even further, Luffy turns the tide of battle by tickling his feet! It’s all very wholesome, really.

With Buggy disposed of, this chapter serves to wrap up a few remaining threads. The townspeople come upon the fight’s aftermath, finding their Mayor in an unconscious state. Luffy, who only knows how to make a bad situation worse, riles them into a furious mob. Luckily Chouchou vouches for them, holding off the villagers as Luffy and crew make their escape. We get a touching moment with the Mayor and fun call back to the trio of pirates from earlier in the arc. With that, the book’s second arc wraps up! Our trio are off, with a boatload of booty and a map of the Grand Line in hand.

Here we have a fun little interlude between arcs, as Luffy and company come across an island deserted but for a group of misfit creatures. We’ve got rabbit snakes, pig lions, and…I don’t know, a rooster fox? The strangest inhabitant is a tiny, treasure chest bound man named Gaimon. Poor Gaimon has been stuck on this island, guarding his secret treasure, inside a treasure chest, for 20 years. It’s fun little diversion without much consequence, again highlighting Luffy’s kind heart that often obscured by his contrarian nature. Interestingly, Gaimon turns down Luffy’s invitation to join his crew, choosing to instead stay on the island to care for the animals. Gaimon and his critters are far too interesting to be simple one-offs, so I expect we’ll see them again in the future. 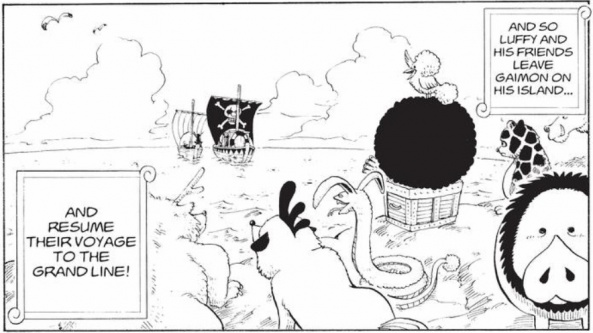 This chapter offers a bit more in terms of world building, as Nami describes the geography of the world of “One Piece.” It seems this world is predominantly water, with two great oceans divided by a single strip of land that circumvents the planet. The land mass is the Red Line, and it runs perpendicular to the Grand Line, which seems like an increasingly daunting place. To find One Piece, it seems Luffy will have to sail all the way around the world, making it a bit easier to imagine how the story may progress.

Also, we get some degree of confirmation that Luffy is bullet proof? Maybe this was touch on in earlier chapters, in the Captain Morgan arc, perhaps? Either way, good to know, I guess.

Kicking off a new arc, we’re introduced to Usopp. Aptly named after the fabulist Aesop, Usopp is a “boy who cried wolf” figure, though in this case it’s pirates. He and his crew cause mischief around the village, but instantly go into defensive mode when they spot Buggy’s sails on Luffy’s commandeered vessel. Luffy and crew have stopped to seek better ships, better food, and grog, but they get a bit more than they bargain for with Usopp, the not so dread captain.

With all the action of the previous arcs, we haven’t had a lot of down time for Luffy, Zolo, and Nami to interact much as a group. This chapter has a bit of that, but still not quite enough to endear the group to the reader. While they’re all fun characters on their own, they don’t quite feel like a cohesive group yet.

We’re also introduced to a bedridden heiress, Kaya, who seems to share some connection to Usopp.

It seems Usopp’s reputation for tall tales precedes him, negatively in the case of the townsfolk who deem a liar. Kaya, however, seems to look forward to his tall tales to brighten his day. This arc seems set to tackle classism in the world of “One Piece.” Despite it being the Age of Pirates, it seems that adventurers of the sea are still looked down on by the wealthy aristocrats of the world.

One such member of this caste is the butler Klahadore, a seemlingly lousy guy who does carry one of my favorite manga/anime tropes; the pushing of glasses of the bridge of the nose. 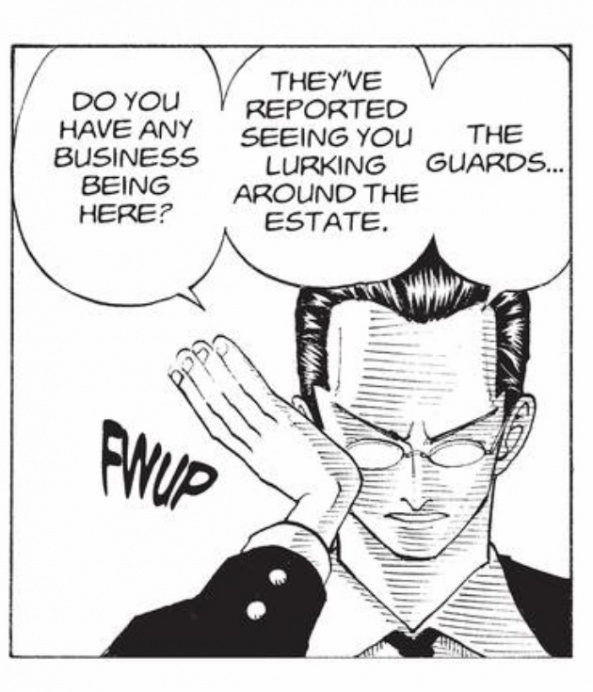 Through Klahadore, we learn that Usopp is actually the son of a pirate, making him unfit to share the company of Kaya.

This chapter is broken up into three disparate but intriguing sections.

The first section picks up immediately on last chapter’s confrontation. After learning more of Klahadore’s history and the reason for his servitude to Kaya, he’s a slightly more sympathetic character. It seems he and Usopp have Kaya’s safety and happiness at heart, but approach her in completely different ways.

In the second section, in a sequence that could be best described as Lynchian, we’re introduced to the backwards walking hypnotist, Django. Django manages to hypnotize Usopp’s young crew as well as himself. This section feels slightly surreal, sandwiched between two grounded and emotional moments, but its importance is demonstrated by chapter’s end.

The third and final scene involves Luffy and Usopp. It turns hour that Luffy remember’s Usopp’s father, Yasopp, from his days spent with Shanks. His stories of Yasopp are an encouragement to Usopp, who is soon to be in much need of encouragement. As the two reminisce, they spot Django on the beach with none other than Klahadore. When they eavesdrop, they overhear mention of Operation “Murder Miss Kaya!”

So…it turns out Klahadore was a huge jerk after all. Not because he’s an elitist jerk, but rather because he’s the scheming and murderous Captain Kuro. Luffy, lacking a single ounce of self-control or foresight when it comes to combatting injustice (which is not unadmirable), reveals himself and confronts Kuro. He’s quickly hypnotized by Django, leaving the responsibility to alert Kaya and the village of the imminent pirate invasion to…Usopp, the boy who cried “pirate.”

You can surely see how this is going to go.

That’s all for this week! Come back next week as I learn how Luffy and Usopp overcome Captain Kuro’s plot. It’s somehow a strangely good plan, by shonen villain standards.