Ahoy, mateys! For this year’s Summer Comics Binge, I’ll be tackling a huge gap in my manga library; the gargantuan “One Piece,” written and illustrated by Eiichiro Oda. Over the next few weeks I’ll be journaling my way through the first 100 chapters, making up the East Blue Saga. This week I’m covering volume 4, consisting of chapters 27 through 35. We get into the heart of the series’s biggest arc yet, as our trio and Usopp go up against the Captain Kuro and his Black Cat Pirates. 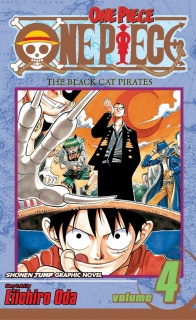 Captain Kuro of the Black Cat Pirates was the most feared evil genius on the high seas…until he vanished. Most people believe he’s dead, but only his crew knows the truth: Captain Kuro has been lying low in a small seaside village, posing as a mild-mannered butler until the time for pillage is just right. Now that time has come, and the ruthless Black Cat Pirates are about to attack…Unless, of course, Monkey D.Luffy can stop them! All Luffy has on his side are his sword-wielding first mate, Zolo; his thieving navigator, Nami; Usopp, a local kid with a knack for telling lies; and his own bizarre rubber-limbed powers. If these four amateur pirates want to stop the entire Black Cat crew, they’ll have to come up with a pretty slick plan…

Usopp’s history of telling lies (no papa) comes back to haunt him in a major way, as not even Kaya believes his warnings of Klahadore’s impending attack. However, this chapter does a nice job of distinguishing the powerful differences between “lies” and “stories.” To the village, Usopp’s lies were a nuisance, but for Kaya they were a blessing and a gift. Nevertheless, the good will and strong relationship is tested is chased off the premises at gun point.

Usopp continues to use his lies to protect those he loves, in this case his young “crew.” He does, however, share the truth with Luffy, Zolo, and Nami, preparing for the inevitable battle to come.

On a very important note, this chapter starts a feature that runs throughout the volume, titled “Question Corner.” Readers wrote in questions for Oda and he answers in alarmingly charming fashion. The highlight from this chapter:

It’s the calm before the storm as the heroes prepare for the oncoming invasion. They formulate a plan, pick their battle field and lay out traps. Unfortunately, they miss the mark in terms of the pirates’ landing point, leading to a frantic struggle to join cut them off before they reach the village. Unfortunately, only Usopp and Nami make in time. Zolo is trapped in an oil spill like the precious baby bird he is, while Luffy gets colder by the minute… 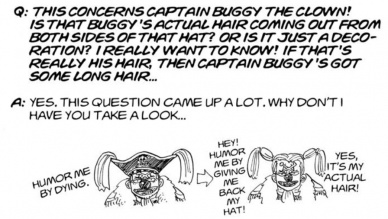 This is a fairly sleight chapter, essentially functioning to build tension waiting for Luffy and Zolo to arrive. However, can we just take a minute to acknowledge how cool and great Nami is? She gets some great moments in this chapter and it kind of sucks that she has to job just so that the boys can look cool.

Tired of waiting and realizing that something must be impeding his plans, Klahadore, or Kuro as I’ll refer to him from here on, sets out to join his pirate crew.

Using the power of his hypnotism to revitalize the exhausted crew, he accidentally catches the “feeble-minded” Luffy as well, sending him into a berserker’s rage. Luffy takes out the entire crew with his “Gum-Gum Gatling Gun” and precedes to go fully extra, ripping the bow from the pirate’s ship, crushing him as he falls asleep. This entire sequence is a joy in so many ways. It showcases Luffy’s power, clears the board for the next stage of the battle, and increases the tension by temporarily removing Luffy from the fight. Overall, great plotting, scripting, and illustrating by Oda. 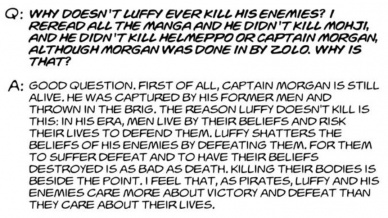 After the all the lies, the truth is set free. Kaya discovers Merry, lying near-death at the hands of Kuro. With Usopp’s claims vindicated, she leaves the safety at home to seek out her spurned protector.

With all the pirate adds disposed of in the previous chapter, we’re now ready to move on to the mini-boss. Siam and Butchie Meowban, guards of the Black Cat pirate ship, aren’t terribly threatening at first glance. They are, however, another brilliant example of Oda’s knack for designing villains, particularly of the animal-themed variety. Siam makes the first strike, “cat-burgling” two of Zola’s swords, leaving him at a serious disadvantage.

Zolo goes one on two against the Meowban brothers, who live up to their names as a couple of feisty felines. Interestingly, when Usopp tries to distract the brothers with his slingshot to allow Zolo time to grab his other swords, Zolo intercepts the blow. At first I expected this to be a matter of honor for Zolo, unwilling to accept help in a sword fight. Rather, he took the hit to prevent Usopp from drawing aggro from the Meowban brothers. Like a true tank, Zolo’s sense of honor is selfless, not selfish.

Things look especially dire with nearly the entire team incapacitated, but the action grinds to a halt as Kuro arrives…

Thinking Kuro might be weakened from his three year hiatus from the pirate’s life, the Meowban brothers attempt a mutiny against their former captain. Too bad for them, this kitty has claws too! 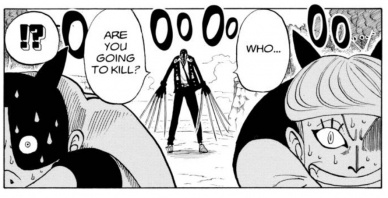 Kuro gives his crew an ultimatum; kill the Straw Hats in five minutes, or everyone dies!

Nami manages to finally wake Luffy up by stomping him in the head. However, his durability is put to the test even further as one of Django’s hypnotizing chakra blades embeds itself squarely in the middle of his occipital lobe. However, as Oda’s alluded, Luffy’s somewhat brainless, so he shrugs it off as a particularly painful flesh wound.

With three minutes remain, Kaya confronts Kuro. Things get very dark as Kuro confesses the lengths he has gone to in order to kill a young girl in cold blood, even as said girl points a pistol in his direction. Usopp springs into action, but it’s Luffy’s projectile punch that takes Kuro down. 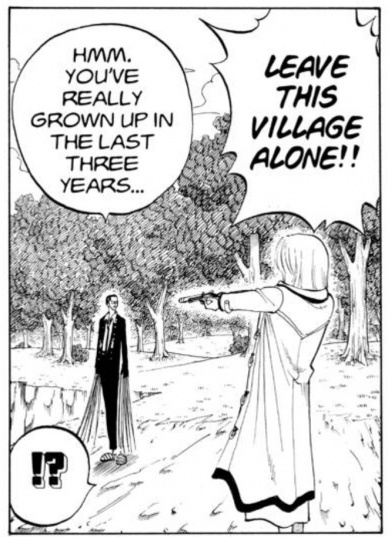 This volume wraps with what appears to be the beginning of the final showdown. Usopp sets his crew on the task of protecting Kaya and also dispatches Django, Leaving Luffy and Zolo to face off against Kuro and the remaining Meowban, Butchie. Again, it’s very lame that Nami appears to be sidelined, injured as she may be. It’s starting to be a rather frustrating occurrence.

This chapter also begins a fun gag involving the chapter covers, which highlight the ongoing adventures of Buggy’s crew. The “Buggy’s Crew Adventure Chronicles,” according to the “One Piece” wiki, is spread across chapters 35 through 75, meaning it will be with us for much of the remaining Summer Binge. This chapter features what remains of Buggy, head, hands, and feet, frantically fleeing carnivorous fish in a make-shift raft.

With that, we wrap on the particularly action packed fourth volume of “One Piece.” Next week should see the (hopefully) exciting conclusion to the Captain Kuro arc.