Ahoy, mateys! For this year’s Summer Comics Binge, I’ll be tackling a huge gap in my manga library; the gargantuan “One Piece,” written and illustrated by Eiichiro Oda. Over the next few weeks I’ll be journaling my way through the first 100 chapters, making up the East Blue Saga. This week I’m covering volume 5, consisting of chapters 36 through 44. It’s a great week overall, as we wrap up the very strong “Captain Kuro/Syrup Village” arc and begin what is shaping up to be my favorite arc thus far. 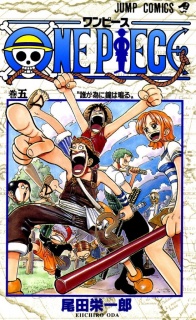 Once upon a time, Usopp was just a local boy with a talent for tall tales. Everyone in his little seaside village knew him as the joker who claimed to be a pirate captain and woke people up in the mornings by shouting “Pirates are coming!” But then real pirates landed on the beach…Now Usopp’s village is under attack by the Black Cat Pirates, one of the most legendary and feared crews on the high seas. And three young would-be pirates have joined him in defending the village: Nami the thief, Zolo the swordsman, and Luffy, the straw-hatted wannabe pirate with incredible rubber powers. Usopp is about to find out how an imaginary pirate stands up to the real thing… and what it means to be a real pirate. His neighbors would never believe it in a million years…

Such an apt title chapter! Much of it deals with Django chasing after Kaya and Usopp’s pirate crew. Usopp can barely stand, but doesn’t stop him from trying to save his friends. Despite being cast as a liar and a definitive goofball, this arc has done a terrific job of building up Usopp as an enjoyable character. His characterization possesses a charm and depth that is second only to Luffy at this point. Well, not to say Luffy is particularly deep…but, I digress.

Zolo makes surprisingly quick work of the last Meowban brother, despite his berserker rage and formidability in prior issues. This allows Zolo and Usopp to take off after Django and the others, leaving Luffy behind with Kuro.

Oda certainly knows how to set a scene and, even more, a fight sequence. In the same vein as the particularly well choreographed battle between Buggy and Luffy, Oda plays Kuro’s skills against Luffy in a manner that is exceptionally dynamic. The opening pages in which Luffy stretches out in order to slingshot into Kuro, only to be twisted and dodged, is elegantly portrayed. The sequence only becomes more exciting as Kuro dodges a punch, only to land perfectly on Luffy’s outstretched arm. He then runs the length of Luffy’s arm to kick him squarely in his rubbery face. Kuro’s speed and cunning is less interesting than Luffy’s gum gum abilities at face value, but the way Oda turns Luffy’s power against him his quite enjoyable.

The chapter isn’t all fisticuffs, however. Much time is devoted to fleshing out Kuro’s motives and backstory. We discover a convoluted 3-year plot involving murder, hypnotism, and subterfuge, all for the purpose of allowing Kuro to exit the pirate game with wealth and peace of mind.

Of note, the back matter for this chapter features character sketches for an early anime-only character named Ganzak. He’s a crab themed pirate with extra robotic appendages and he is very cool.

Kuro’s relationship with his former crew has been on thin ice since their reunion and we’ve finally reached the breaking point. Kuro announces is intention to not only kill Kaya and the Straw Hats in his quest for a new life, but all parts of his old life as well. He’s certainly going for a clean break. Kuro’s intentions are entirely selfish and fairly one dimensional, and his pirate philosophy stands in direct contrast with that of Luffy and Usopp. In his most frightening display yet, Kuro goes on a rampage, slaughtering his crew where they stand at lightning speed. There have been several moments where Luffy has “had enough,” going into a saiyan-esque rage, and his disgust with Kuro’s treatment of his crew is perhaps the most powerful. 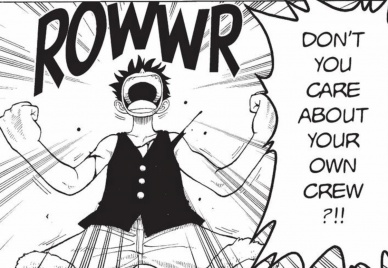 Chapter 39: For Whom the Bell Tolls

Talk about banality of evil. As dangerous and cunning Kuro has been up to this point, his “doom” is announced in this chapter’s opening panel. This is a fantastic use of lettering and sound effects, something I don’t acknowledge often enough. Both Luffy and Usopp get the upper hand on their respective opponents and, in a stunningly composes spread, deliver felling blows. 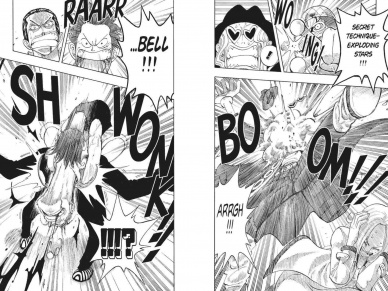 It’s especially touching that, at this point, the Black Cat Pirates have turned on Kuro and are cheering for Luffy. Luffy, man of principles that he is, will have nothing to hear of it, assuring their comeuppance is at hand as well. Is Luffy a cop?

The villains have been bested, now for the emotional wrap up to the longest and most well developed arc of “One Piece” so far.

I’ve mentioned already how much I’ve really come to like and appreciate Usopp during this arc. His decision to “lie” about the pirate invasion, as well has his part in stopping it, is the pièce de résistance. It’s a strong call back to the character’s theme as a trickster, and ultimately positions the character for future growth. The moment when Usopp tells his crew that he plans to disembark for parts unknown, the farewell is tear-jerking, both in its sadness and its absurdity.

Ok, maybe I’m overanalyzing things here, but this is the second chapter that I’ve noticed that opens on Luffy and a “doom” sound effect. Maybe the intention for a Japanese audience is different, but to me it feels ominous as all get out. Of course, when the subject matter is the proper disposal of fish bones, I suppose there isn’t that much to worry about?

For a minute I was very worried that Usopp was going to sail off on his own. We’ve seen other potential additions to the Straw Hats crew, such as Kody and Gaimon, go on their merry way, passing out of this story into their own. However, I’m glad to report that Usopp will go on the “Merry Go” way, joining Luffy and company aboard their brand new ship. The gift from Kaya is delightfully whimsical and I love it. Speaking of Kaya, a character who is for now being left behind, she gets a sweet send off, pledging to become a doctor. 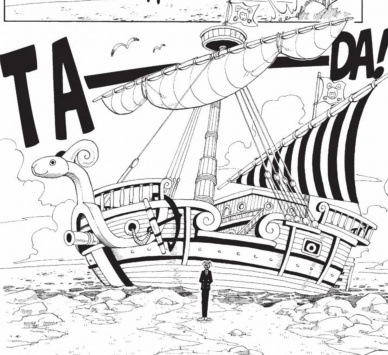 As we’ve seen with the conclusion of other arcs in this series, this next chapter is a bit of a one-off, transitioning from one story to the next here. The latest McGuffin involves a pair of bounty hunters, the titular Yosaku and Johnny, who are familiar with Zolo. During a bit of target practice, Luffy and Usopp destroy the rock the brothers had sought refuge on. This leads them on board, where we learn that Yosaku is mysteriously ill and on the brink of death. He’s suffering from some awful symptoms, which Nami, the only clever one on board, recognizes a scurvy. A few limes later and he’s back on his feet. I feel scurvy is one of the first things that comes to mind when thinking of pirates, but the whole thing still comes off as fun and educational, along the lines of similar sequences in “Food Wars” or “Dr. Stone.”

While the crew had previously argued over what role they should focus on for their next crew member, this live demonstration on the importance of a well balanced diet sets them on task with locating a proper chef. Luckily, Johnny knows just the place.

Also, the return of “Question Corner!”

My only prior context for the character of Sanji is a one-shot crossover between “One Piece” and “Food Wars” that was published in “Weekly Shonen Jump” a while back. So, I know that he’s a chef, but little else. It turns out, he’s also the hero of any one who has ever worked in any sort of customer service position.

This chapter, and to be slightly telling, the following chapter, are a lot. The absurdist nature of the series gets ratcheted up a few notches and it’s certainly for the better. In quick succession we are introduced to the Baratie Ocean-Going Restaurant, in all its glory, as well as the Minster of the Navy, Lt. Ironfist Fullbody. At first glance I though that Fullbody looked suspiciously like the Naval officer that was given credit for capturing Kuro during the flashback in chapter 38. I think that would be neat little connection between the two arcs. Unfortunately, regardless of how “full-bodied” he is, the lieutenant lacks the strong cheekbones and cleft chin of that former naval officer.

Then, SO MUCH HAPPENS. Let’s try to run through it: the Navy fires on the Merry Go, Luffy bounces it back into the the Baratie, Fullbody makes a fool of himself, Sanji makes a fool of Fullbody, the head chef enlists Luffy as an indentured servant, Fullbody has a fly in his soup, and Sanji beats Fullbody to near bloody death. That’s all in the span of about 12 pages. “Food must never be wasted” is the most badass catch phrase ever.

This chapter continues to up their ante on the farcical nature of the previous chapter. Let’s do a quick run through to close out: the peg-legged chef pegs Luffy with a flying jump kick, then demands a replacement leg, Sanji’s rival “Patty Cook” practices sweet customer service lines like “welcome squid-face,” Sanji does this; 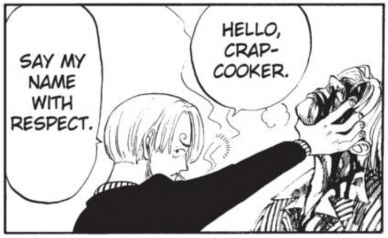 Then, everyone fights, an escaped pirate comes in, murders a man, then everyone fights some more. It ends with Sanji feeding said murderous pirate a delicious meal. I haven’t quite had the moment where I’ve come away from these readings saying “I love this book” until these last couple of chapters. Bring on Baratie and Sanji!

That wraps up my very long and meandering recap of volume 5. I very much look forward to the next couple weeks, as I learn more about my new favorite boy, Sanji.