Ahoy, mateys! For this year’s Summer Comics Binge, I’ll be tackling a huge gap in my manga library; the gargantuan “One Piece,” written and illustrated by Eiichiro Oda. Over the next few weeks I’ll be journaling my way through the first 100 chapters, making up the East Blue Saga. This week we’re at our halfway point and I’m covering volume 8, consisting of chapters 63 through 71. We wrap up the Baratie arc and dive into the much anticipated Arlong Park storyline, featuring a startling revelation about one of the Straw Hats! 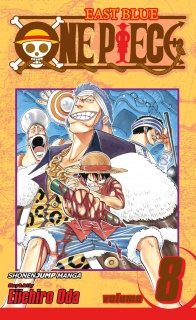 If Luffy wants to get out of a year’s worth of chore-boy duty on the oceangoing restaurant Baratie, he’s got to rid the seas of the evil Don Krieg. Unfortunately, Krieg’s armed to the teeth and aided by his “Demon Man,” Commander Gin. The battle takes a surprising turn as Krieg reveals his increasingly deadly military might! Meanwhile, Nami has sailed off on the Merry Go with treasure in tow, and she’s headed to Arlong Park, home of creepy Captain Arlong and his Fish-Man Pirates. What business does Nami have at Arlong Park, anyway? Something fishy is going on and Luffy’s crew just may be in over their heads!

Chapter 63: I Won’t Die
Gin is on the brink of death but, thanks some dubious medical science, he may be able to be saved? I don’t think gas masks work that way, but this is also a world with a very stretchy boy and a man that has lived in a treasure chest for a decade.

The theme of this chapter centers squarely on death. Or, more specifically, one’s destined place of death. We’ve at the endgame of the Krieg/Luffy battle and, despite Luffy’s plot armor and Krieg’s very spiky armor, it seems like it could be anyone’s fight. One interesting wrinkle in this fight is Luffy’s weakness to water. Since all of his significant fights have taken place on dry land, his Gum Gum induced flaw hasn’t been a significant factor. Now, fighting amidst the wreckage of the Baratie and Krieg’s ship, one wrong step could send Luffy to an untimely, watery grave.

I’m tackling these chapters in tandem because, essentially, they tread the same ground. While the battle between Luffy and Krieg is perhaps the mostly dynamic and visually impressive yet, it is drawn out of three chapters of one-upmanship and upheavals, leading to Luffy’s inevitable success. 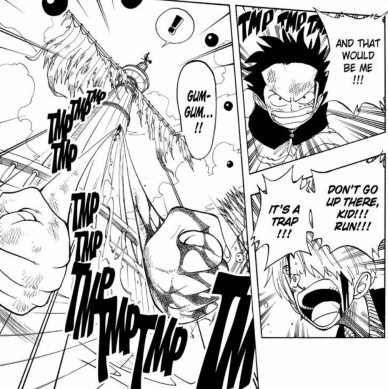 Luffy continually overcomes every tool in Krieg’s outrageous arsenal, a great teachable moment for Zeff to instruct Sanji on the concept of “Grit.” There’s some payoff for Sanji’s arc here, and his attachment to Luffy is cemented, but it becomes a bit wearisome. By the time I reached chapter 66 I was begging for Krieg to just stay down, not out engagement in the conflict, but out of a desire for something new. Not quite the feeling I wanted to have at the close of this arc.

Yes, give me more of this! In the aftermath of Krieg’s defeat, we get some terrific moments between Sanji and the other characters.

First up, there’s the resolution of the Sanji/Gin thread. Hovering on the bring of life and death, Gin vows to go on living Krieg’s dreams as his own. His story is a tragic one, but it ends in hope. I hope that his promise to meet Sanji and Luffy again in the Grand Line comes to fruition.

Next, we have Sanji and Luffy. There’s a wonderful moment, as Sanji tells Luffy the legend of All Blue, as Chef Zeff looks on from above. “He still lights up when he talks about it…,” Zeff notes, and it’s true. Sanji regals Luffy with an air of childlike wonder and zeal. It’s great to see the curmudgeonly chef have something to be excited about. 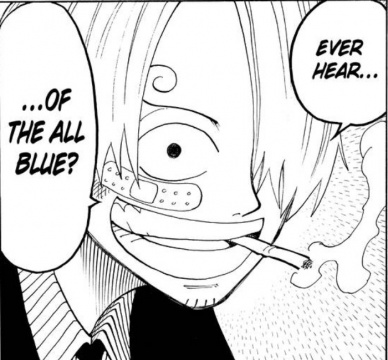 Still, even with Sanji and Luffy’s newfound bond, the former will not give up his obligation to the Baratie so easily. This leads to an absurd plot in which the ships crew pretends to despise Sanji’s cooking to drive him away. In essence, they give him the “White Fang” treatment. Between Luffy’s stubbornness and the Baratie’s relatively thin walls, the plan doesn’t work out quite as intended.

Rather, it takes the unexpected reappearance of Yosaku to convince Sanji to join Luffy and chase their foolish dreams together. As has become a custom for the series, Sanji’s departure is rung out with a massively emotional display of tearful sentimentality. 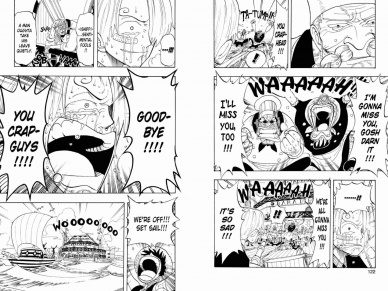 We’re finally on our way to Arlong Park (nice).

As we learned last issue, Yosaku was able to deduce Nami’s course. Here, we learn that he believes that she has gone after Arlong, a notorious fish-man with a large bounty on his head. We also learn about the Seven Warlords of the Sea, a group of government recognized pirates. Among this group is Hawk-Eye Mihawk, who battled Zolo just a few chapters ago. Once again, “One Piece” continues to succeed in creating a compelling world and foreshadowing important plot points to come.

We’re quickly introduced to Arlong the fish-man, his unique crew, and the less than savory navy men that he deals with. Arlong himself is a striking figure with his chiseled physique, saw-toothed nose, and prominent chin. Other fish-men make appearances as well, such as the octopod Hatchman. The concept of the half-man, half-fish race within the world of “One Piece” is a welcome one. I can foresee potential for stories centered on discrimination and other-ness. In this vein, I hope that not all fish-men will be cast as villains, as I could see that getting problematic quickly.

Speaking of villains, this chapter ends on the series’s most shocking revelation to date. Nami is a double agent, a pirate after all, an officer in Arlong’s crew! 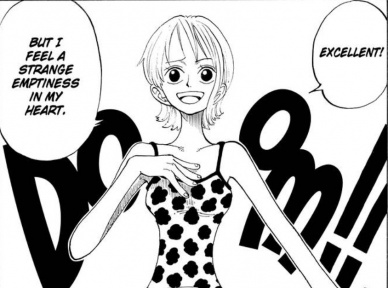 Chapter 70, 71: The Great Adventure of Usopp the Man, Lords of All Creation

We finally catch back up with Zolo, Usopp, and Johnny. They too are looking for Nami and, tracking her to Arlong Park, are seeking a way into the compound. Unfortunately, they run up against a couple of fish-men. While Usopp and Johnny make a rather cowardly escape, Zolo is captured and taken to Arlorng. There, he is reintroduced to the treacherous Nami. I’ll have more on that in a minute.

Johnny and Usopp, meanwhile, stumble upon a town that has been recently wrecked by the fish-men. It turns out that fish-men have the strength of ten men, which gives them the strength to…*checks notes*…flip houses upside down? The pair runs across a pair of survivors, the young boy Chabo and the eerily familiar Nojiko from a nearby village.

These threads begin to converge as we learn that Nojiko is Nami’s step-sister. From previous chapters, we know that Nami has a grudge against pirates because of the death of someone close to her. Here, we learn that Nami and Nojiko’s guardians have since died. From Arlong’s own mouth we learn that Nami forgave the death of parent for money. From these clues, we can begin to paint a picture of Nami that is less than savory. However, things may not be as they seem. In an attempt to provoke Nami, the bound and injured Zolo throws himself into the water to drown. Nami not only rescues Zolo but sets him free while Arlong is away. There’s likely missing pieces to Nami’s story and redemption may still be at hand. 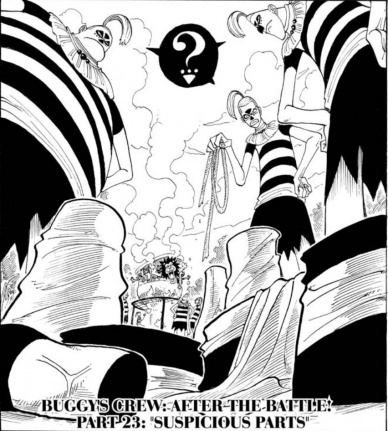 With all the big things going on in Luffy’s world, I still want to take a quick minute to check in on old Buggy. It seems that Ritchie’s revolt has taken a turn for the worst. Buggy, meanwhile, as seemingly arrived back home with his new pirate friend in tow. With Buggy’s remaining body parts left unattended, he makes another play for control. Again, I wonder if we’re being set up for a Frieza-esque return for this early series villain.