Dive into the disaster that sets up the new status quo for Marvel Comics’s teenaged superheroes with “Outlawed” #1. 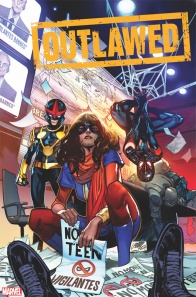 EXPLODING FROM THE PAGES OF INCOMING!

In the wake of a devastating tragedy, the United States passes a law that will shake the Marvel Universe to its core.

The world has had enough of teen heroes. The crackdown has begun. And the lives of Marvel’s next generation will never be the same again.

EVE L. EWING and KIM JACINTO launch a new era in this game-changing event one-shot that will send shockwaves across the Marvel Universe! You won’t want to miss this one!

A disaster involving teenaged superheroes leads to the enactment of a law that splits the superhero community apart, with Captain America in particular being on the side of people who are against said law. Does this description feel familiar? It should, and that’s not necessarily a good thing. With the “Outlawed” #1 one-shot, Eve L. Ewing treads all-too-familiar ground for anyone who knows about the Stanford Incident and the events of (and at least three-year fallout from) Marvel Comics’s “Civil War” of 2006 and 2007, itself recently revisited in different forms as a concept across the Marvel brand in 2016. While this type of story is already a recipe for disaster (and not in the way intended), it falls on Ewing’s shoulders to make the effort worth it.

Unfortunately, Ewing’s writing does not help at all. From what is seen, the inciting incident of the eponymous law seems to be a relatively normal thing for superheroes, and even appears to have less fallout than some others, with the only known injured (let alone killed) being a single hero. The elements that could be blamed on the Champions are not explained well, with events simply spiraling out of control without much, if any, internal reasoning. Yes, there was a dangerous threat, but it was on a level that many of these heroes had seen before or at least were aware of, with the outcome appearing to be relatively arbitrary.

Once the reason for the title is made evident, Ewing’s methods of showing it are extremely heavy-handed. When the government sends in teams to round up and stop teenaged superheroes to the point of raiding private homes, the effect can be disconcerting, especially in the United States during the period in which this is being written, and is much harder hitting than the relatively reasonable requirement that heroes be regulated and public-facing, rather than outright banned. However, when the group doing the rounding up is called by an acronym that spells out “C.R.A.D.L.E.” for teams of people who are, at their oldest, twenty, and outright called teenaged in many other contexts, said actions become a lot harder to take seriously, and almost appear to be a parody of the very “think of the children” approach it has its antagonists professing. While yes, tearing down that approach may be the intention of the ‘Outlawed’ arc, the entirety hits with the subtlety of a cartoon anvil on the head.

Despite being a spiritual sequel to “Civil War” in all but name, “Outlawed” #1 lacks any real self-awareness about how this kind of thing went the previous time (which of course may be the point about certain cyclic elements of real life, but that’s neither here nor there). Speedball, infamously turned to “Penance” by his survivor’s guilt over the events of the Stanford Incident, would make sense to appear on the side of the law, but having him be one of its main enforcers with commentary about how he knows what they do is a bad idea misses part of the point in what had actually happened at Stanford. As stated earlier, Captain America again takes up the defense of teenagers by using his experience in World War II, a completely different scenario, rather than bringing up the events only a few years prior and how things had spiraled out of control after the Superhuman Registration Act had been passed into law.

More than anything else, “Outlawed” #1 plays into a trend that many readers have grown tired of: heroes fighting other heroes, rather than villains, in the name of morally gray structures. When everyone is a little right and a little wrong, when readers are divided rather than united, why should they care about what is happening to any of these people beyond waiting for this arc as a whole to be over?

Kim Jacinto’s artwork is the saving grace of “Outlawed” #1. In the opening, the use of three columns per-page as panels helps to give the impression of an interrogation, turning the off-panel lawmakers into nondescript bogeymen for the teenagers and their allies to hold up against. The heroes that people know are viewed in close-ups, giving a view into their intricate emotions and wild gestures, while their opposition is seen from further away and rather impersonally handled to distance readers from that point of view and see it as out of touch with the world itself. At the same time, by splitting up that structure when Spider-Man (Miles Morales) makes his rebuttal to the entire affair, Jacinto is able to show both the teenager’s righteous anger and his ability to, however ineffectively, stand up against the authorities who aim to push him down.

Jacinto’s ability is all the more visible with how he deals with the far more dynamic behavior around the Coles Disaster itself. High-intensity emotions and thick lines helping to add to the feeling of youth among the various heroes, and lending the entire thing an air of being a cartoon for kids before the events of the Disaster itself spiral wildly out of control. Jacinto perhaps makes the Champions appear even younger than they usually are, helping to add what credence is possible to the Underage Superhuman Welfare Act itself. This dynamic style follows through to the events after the act is passed into law, with even the wider lens used to give a bigger picture image still appearing to be very lively.

Espen Grundetjern uses his coloring expertise to further enhance the emotional effects of Jacinto’s pencils and inks. A brilliant green flame can give an image straight out of the depths of Hell for the sake of horror, while yellows can give the same effect in lesser degrees. Dark brown and orange against a blue sky can give an alien entity a sense of menace often ignored at a closer range, with similar, but faded greens to the nearly infernal fires above can be a source of comfort and calm in the midst of terror. As the most interesting use of color, a streak of bright blue from the eye sockets of Nova’s helmet give the dual impressions of symbolic tears in regards to ineffectiveness and of utter power being just barely held back for the sake of morality.

Final Verdict: 5.0– Dynamic artwork and well-done colors can’t save this script from being a retread of all-too-familiar ground.