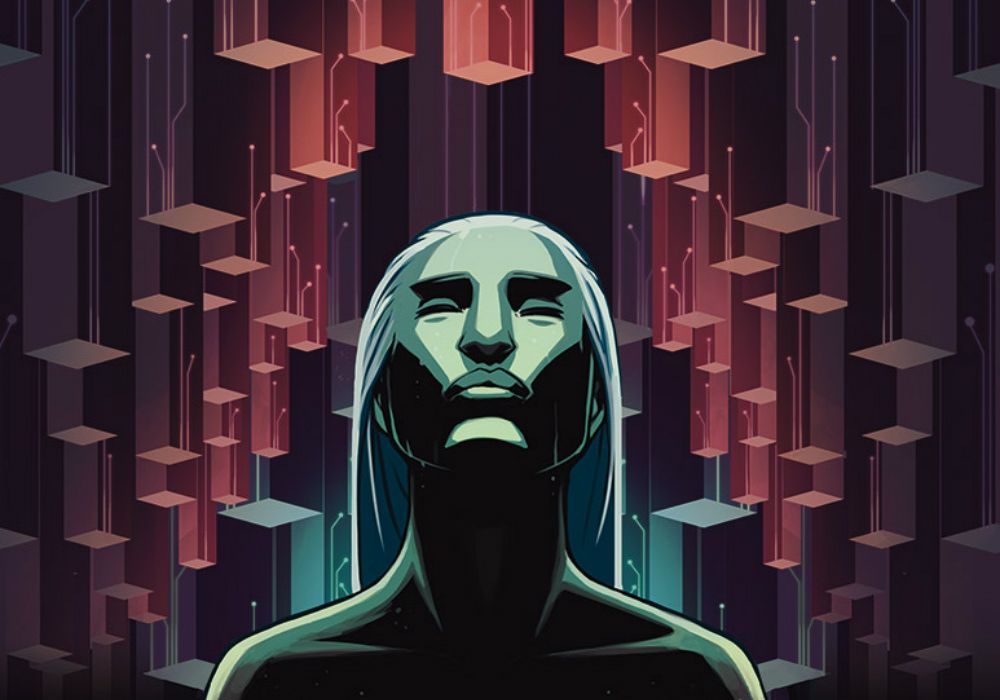 Karin, Jack, Noira, and Vance depart from Arbuck and head for Centrum, but ‘Diso has other plans in store. The sentient city has a darker underside that begs to be explored. Our review will contain minor spoilers. 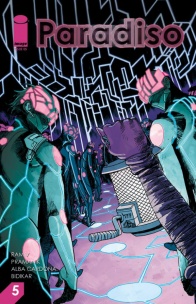 “DARK DWELLERS,” Part One Delving deeper into the city in search of answers, Jack and his allies find Paradiso coaxing them toward a place beneath the city—an inverted metropolis of warrens and tunnels populated by the things that live in the dark.

It’s been some months since we’ve last seen “Paradiso” so fans will be pleased that this new arc is a welcome return to form. The first four issues of the series introduced readers to a fascinating future world in one of the best new Image comics of the year. ‘Dark Dwellers’ Part One expands the mythology of the titular city with a retelling of the battle between the makers and the made—and the machines’ ascension and subsequent split leaving the world as we see it now. “So the Eidotecht remembers. So the Eidotecht must tell.” It’s an effective prologue to open the second arc, a religious spin to the moments leading up to the Midnight Event. Ram V and Devmalya Pramanik are far from showing us all ‘Diso has to offer, and as you may guess from the subtitle, #5 has us journeying to the machine city’s subterranean depths.

Devmalya Pramanik is the key to bringing the living, breathing metropolis of Paradiso to glorious life. Now that Paradiso has revealed a city beneath the city, a whole new world is exposed for Pramanik to dream up. With each flip of the page, more technological marvels of Paradiso’s machine architecture are introduced. Glowing circuit board walls, hexagonal beehive floor tiles, rows of translucent tubes containing human (?) specimens, a spiraling mechanical rictus tunneling into the ground, and protruding tangles of metal pipes and tubes flesh out the ever-growing city’s character. The trio of cybernetic warriors of the ‘Diso underground are also great character additions with computerized visors that conceal their faces. Fans will know that Pramanik excels at character designs like Mr. Honeybad, Hazard, Kronos, and Watcher from issues past—no exception here.

Once the crew is underground, the tone shifts to horror for a short segment. “Paradiso” has always maintained an undercurrent of horror from the very first panels of issue #1. The city can be a scary place after all with its Black Factory, the mysterious fog, and the “monsters” who reside within. That element of terror is again effectively implemented here when the crew encounters subhuman creatures in the underground darkspot. Aditya Badakar reuses his amorphous maroon word balloons to letter the creature’s speech, a nice visual addition to reinforce its inhuman nature. ‘Dark Dwellers’ is a very fitting title for this arc with more horrors surely in store for our spelunkers.

Alba Cardona Gil has replaced Dearbhla Kelly as series colorist. Fortunately, the quality remains consistent and any changes go unnoticed. Gil’s colors help segment each story section with a visible change in hues. Bright shades of green glow from behind tubes of human specimens and conductive tracks of circuit board walls in Karin’s flashback, from her scavenging days eleven years ago. The change in color serves as a smooth transition from past to present and shows the state of decay Paradiso has undergone. Paradiso’s underground is now pitch black with only the color of rusty red to light their way.

“Paradiso” remains a comic that demands careful attention. In fact, a reread may be in order to catch up with Jack and the gang. Never a story to hold your hand, “Paradiso” again immerses readers into new parts of the city where little is explained. Rather than annoy, however, the mystery makes the narrative all the more enticing. As the city changes itself to reveal new pathways and possibilities for its inhabitants, so too does the story in relation to its readers. After all, this is a story where even its characters remain in the dark regarding the truth of the world through which readers experience vicariously. Here, we’re presented with a brief “meanwhile” interlude about the enigmatic irontrees elsewhere in Paradiso. Why are they here, and what do they mean? It can be taken as a meta-analogy for reading “Paradiso” itself. Trust that these pieces are here for a reason—there’s a greater purpose to all things even if their meaning isn’t initially clear. As Carson, maintenance man of the irontrees, says, “You can’t see the whole world, only the bit that matters now.”

Final Verdict: 8.2 – “Paradiso” returns and adds to its mythology with a dark dive beneath its sentient city.