The tale of “Penny Dreadful” nears its conclusion in the penultimate issue of the comic’s ‘The Victory of Death’ arc. 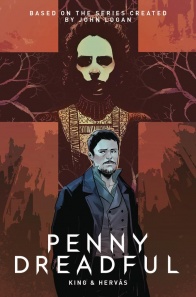 Vanessa Ives’ body has been inhabited by the ultimate evil, Satan, as the hordes of hell rampage through the streets of London. Ethan, still grieving for the love of his life, has committed an act that will surely lead to the ultimate destruction of mankind… unless they can find the eternal flame, the only thing that can put an end to the horror that has befallen humanity.

With so much at stake, and time of the essence, Catriona Hardtegan and Victor Frankenstein are charged with gathering their scattered troops, all the while battling demons and the Nephilim, in a desperate attempt to put on a show of force when they hunt down the immortal scourge of souls, and their last hope for redemption…the elusive Dracula.

As the penultimate issue of a sequel comic clearing up the plot of a three-season television series, “Penny Dreadful” #11 can perhaps be forgiven for being a bit hard to get into for newcomers. Readers are assumed to know who the characters are coming in, though there is some attention given to the idea of new readership.

Chris King’s writing is a fair bit faster than the plotting of the television show, with a higher emphasis on spectacle that likely could not be easily replicated on a television budget. However, the pacing, which allowed for the deaths of several rather major characters, is more in line with that of later episodes of each season of the source material, and so is far less jarring than it normally would be.

For the most part, the pieces are already in place through the preceding ten issues. The events are rapidly approaching a conclusion, from Ethan Chandler’s corruption to the machinations of Lucifer and his brethren, alongside the events revolving around Lord Hyde and the remaining heroes. Hyde is disturbing enough, but also does not overstay his welcome, providing some last minute Victorian science fiction horror before delving into the more gothic trappings of Dracula or the full-blown religious horror of Lucifer. In the other scenes, Ethan’s internal conflict and corruption takes the fore, drenching the terrible actions to take place in despair befitting a Victorian horror story.

On the other hand, increased focus on the comic’s newer elements may make it hard for people who are a fan of the overall media franchise to really just jump in at all, even those who are familiar with the events of the television series and its three seasons. Comic original characters Nanuq and Sedna may be difficult for people who have only seen the television show to understand beyond “two werewolves,” and there is dramatic tension revolving around them that may be hard for those who are just jumping in from the show to the comic to really care about.

That is not to say that characters introduced in the comic are all bad. The arrival of “Dracula” character Quincey Morris adds more to the overall mythos of the series in its final moments, and he is interesting enough on his own to be brought in at this climactic entry. Furthermore, the brief appearance of Kharon (also known as Charon, to fans of Classical mythology) is rather memorable, with the use of blood magic an intriguing method of moving forward with the story, especially as many of the spells in the seasons of the television show were verbal in nature, but some did involve blood.

Dracula’s own characterization seems to be a bit of a departure from how he was previously presented, and more in common with the classic Bram Stoker version of the character. While the change is a fun way to bring newcomers into the story (such as they may even be able), it does seem like a pretty drastic change and one that seems a bit too clear cut at adapting the Bram Stoker novel from 1897, especially when there was potential room to showcase his more unique television version a bit more.

Jesús Hervás has a striking, heavily shaded style to his artwork, relying heavily on the colors to tell the story. In many comics, this style may not have worked, but the dark, romantic majesty of “Penny Dreadful” fits it very well. Rough, violent actions are shown in blurred movement, whereas the more stable lines of individual people’s faces showcase how distinct they are from their surroundings. Hervás uses dark shadows to showcase the disturbed nature of the Lucifer-corrupted world, with the far brighter one of Dracula’s castle being a stark, almost unnatural contrast. Furthermore, Hervás utilizes perspective to create truly haunting scenes, such as the trip across the water by Kharon himself, much like the aforementioned slow pacing of the television series often would use.

However, even Hervás’s work would be incomplete without the coloring provided by Jason Wordie. Shades and hues are dependent not only on the natural flow of a scene, but also on distinguishing individual characters by their emotion, such as bathing violent characters in a wash of red, or the undead in a ghastly white. This coloration is yet another way of distinguishing the world of Lucifer with from the domain of Dracula: more “normal,” safer colors, such as the tiling of the floors or the white of the Count’s suit, rises in stark contrast to the sea greens, dark blues, and bloody reds around most of the world, not to mention the crisscrossed veins on Vanessa Ives’s reanimated, possessed corpse or the blood red sky.

Rob Steen’s lettering provides the final piece of the puzzle. By having onomatopoeias break panel barriers, their effect is that much more potent, the sound almost truly audible. Wild screams of anger or growls of werewolves are not shown as connected to the person making them, but rather in the background, enabling readers to almost feel it in their gut rather than identify it with a specific person.

In all, the issue is well handled, but definitely not a good idea to jump into cold.

Final Verdict: 6.5– A well-handled story that is nonetheless held back significantly by the weight of its own continuity across two different forms of media.