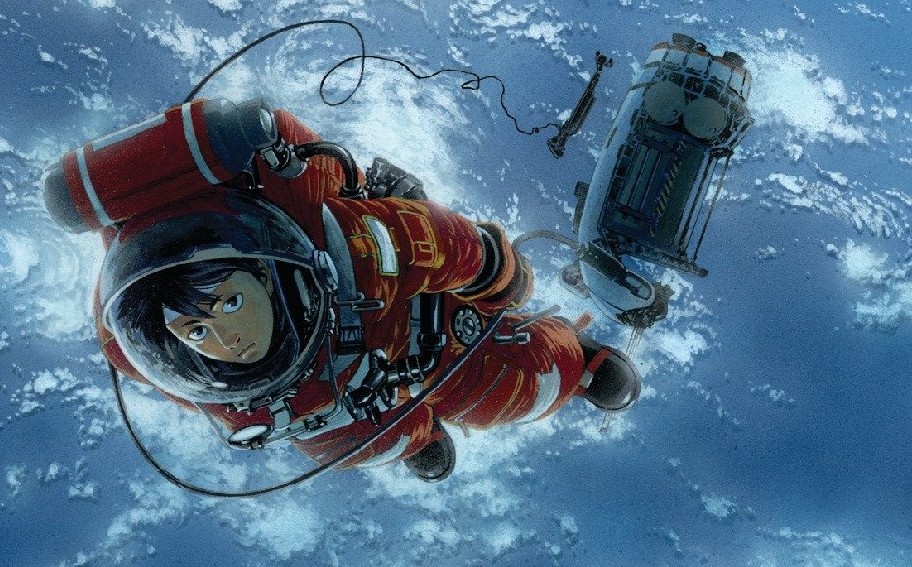 In space, no can hear those annoying sounds a dump truck produces when it backs up. Makoto Yukimura’s garbage-bound science fiction tale is as fun as it is brilliant, cleverly balancing character work, world building, and political intrigue. 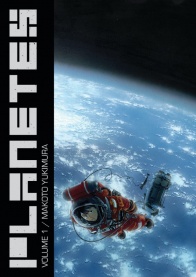 Cover by Makoto Yukimura
Written and illustrated by Makoto Yukimura, lettered by Susan Daigle-Leach, translated by Yuki Johnson
It’s the 2070s, and mankind has conquered space, making interplanetary travel possible and igniting the imaginations of the world. It’s also vastly increased the amount of dangerous space debris, and someone has to clean it up. Hachimaki, Yuri, and Fee are a crew on that beat, each with their own goals, tendencies, and personal problems: Hachimaki dreams of deep-space exploration in his own ship, Yuri is still recovering from the death of his wife in an accident caused by orbiting debris, and Fee is secretive, but there’s a lot going on under the surface!

Just trying to do their jobs in an age of space-age environmental concerns and new vistas of exploration, the crew deals with Hachi’s fear of isolation hampering his hopes of joining an upcoming Jupiter mission, keep an eye on the wreckage for signs of Yuri’s lost wife, and become unwitting heroes when the only place Fee can still smoke is threatened by terrorists! Dark Horse Manga is proud to present Makoto Yukimura’s award-winning hard sci-fi epic Planetes in two omnibus-sized editions, complete with bonus color pages never before seen in America!

Some people seem to struggle with the premise of “Planetes.” They need to be convinced that reading about garbage-collection in space is just as exciting as reading about wars in space, of trekking in space. Not me though, my ears were burning from the moment someone described the basic setting of the story.

Because space is naturally amazing, we don’t need to fill it up with stuff that don’t exist. “Plantetes” proves that you can generate the same amount of the grandest, wildest, exciting fantasy by keeping things grounded. Makoto Yukimura’s story works best by stressing out all the stuff that is either ignored or relegated to back matter in other science fiction sagas. His heroes are little people, sanitation workers, bureaucrats, the too old and too young. But just because they are little people does not mean their stories are little. If nothing else “Planetes” will show you that in the hands of a master storyteller every story is worth telling: doing a day’s work, trying to get better after an injury, visiting home, even attempting to sneak out to catch smoke break. Everything in this series is just a joy to read.

Part of it is due to how well defined the characters are, from the stressed-out but responsible Fee to the stubborn Hachimaki to the overtly-earnest Tanabe. They start out likable, for all their flaws, and the reader learns to enjoy their company the more the story reveals new facts about them. In that aspect alone I would rank “Planetes” alongside any ensemble drama you’d chose to name. It’s just so wonderfully human and humane. The mark of a good story of that type is that we can understand the point of view of every character even as they disagree with one another, no one is the villain of their own story.

Of course, none of that humanity could shine through if Makoto Yukimura wasn’t as strong an artist as he is an author. Thankfully he proves equal at both. There’s a moment, rather early on in the story, in which Hachimaki meets a young girl who stands up and suddenly towers over him. The scene is priceless both in terms of body language and facial acting. His work shows the ability to easily shift between moods of expression, drama becomes comedy, while exploring the full range of human emotions.

While his character work is fine indeed the reason you’ll want to stick this series is his tech-spec stuff. For a work that tries very hard to be grounded, his design sense is just so ridiculously cool. I love the bulky space suits and the cobbled-together look of the Toy Box spaceship and the workplace causality of the moon base. There’s this great utilitarian quality to his deigns that make everything feel lived-through.

This is neither the shiny-bright Apple future nor the grimy and dirty cyberpunk world. In “Planetes” the world feels . . . right. It feels like something humans would do. Specifically, it feels like how humans take something mass-deigned and personalize it to accommodate their taste. The series ends up somehow being a lot more interesting to look it than most ornately over-designed science-fiction manga. Yukimura doesn’t look at notion of ‘realism’ as a limitation, or as an excuse to be dull. Instead he looks upon it as inspiration, something to build upon.
This notion is carried farther into the political undercurrent of the series. Though one could excuse this type of story to ignore the implication of commercialized space travel, the story dives instead head-first into the political intrigue as the corporations wield third-world soldiers against one another. The sub-plot with the Space Defense League, a group that opposes farther colonization of space, fizzles-out as the character melodrama takes center stage in the second half of this volume. It feels like both a waste of potential and a demonstration of callousness, considering that the point these terrorists/rebels make is at least somewhat valid. Even if its expressed through extreme violence, it’s weird to see it waved off after such dramatic build-up.

This is certainly an issue, and I can certainly see the argument for avoiding the political topic completely if you are just going to pull the rug underneath it in such a fashion. And yet despite this issue “Planetes” will prove to the biggest doubters that anything can be made into a good story, providing the storyteller is talented enough – one person’s trash in another’s treasure.